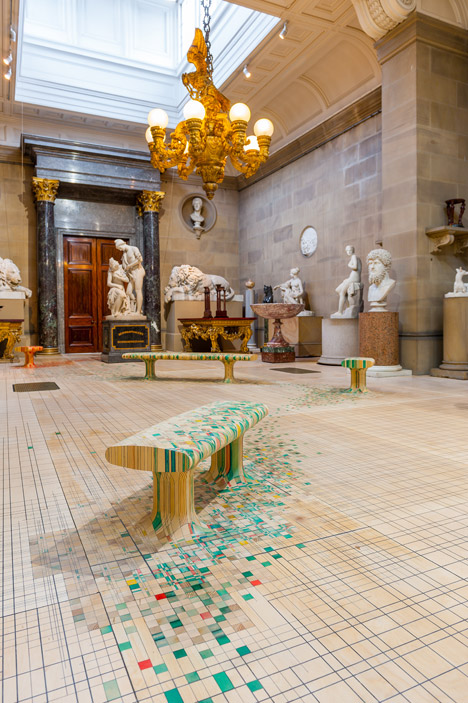 London studio Raw Edges was commissioned to produced an set up inside the 19th-century sculpture gallery, as portion of an exhibition of seat furniture named Make Your self Comfortable at Chatsworth. 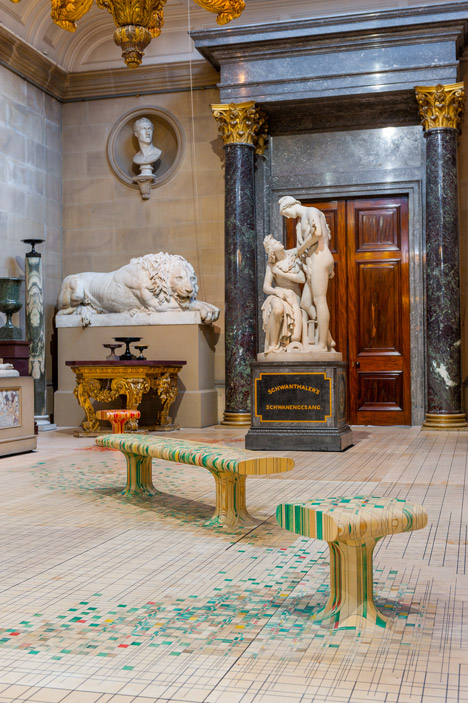 Rather than developing a single piece of furnishings, studio founders Yael Mer and Shay Alkalay chose to transform the area with an set up that extends across the full area. 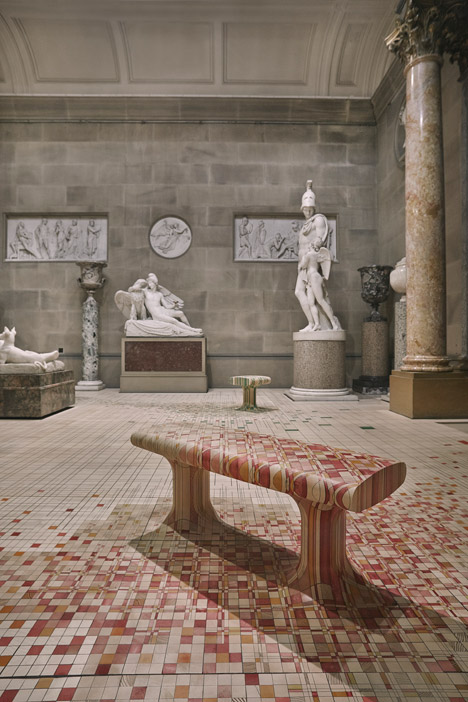 The designers utilised pieces of dye-soaked timber to produced a patterned floor for the 300-square-metre room, with benches and stools emerging from a lot more densely coloured regions. 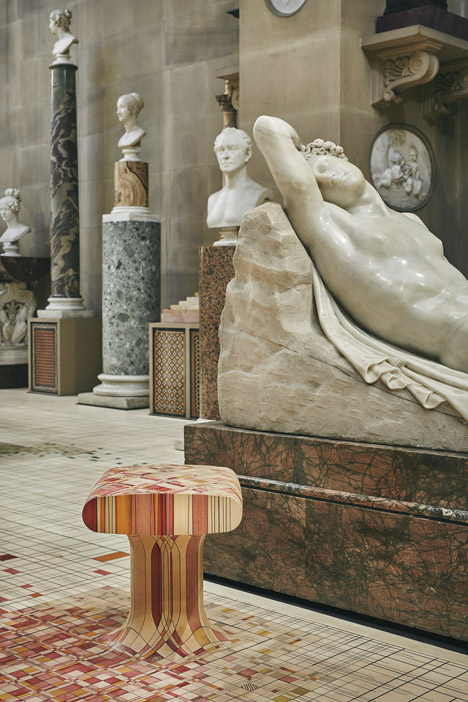 “Furnishings is usually mobile, you can move it,” stated Alkalay. “Typically when you see a chair it has pointy legs – you do not often have an possibility to just resolve a piece of furniture to the ground. We played with the notion that it in fact grows from the ground and seems to be virtually like a tree trunk.” 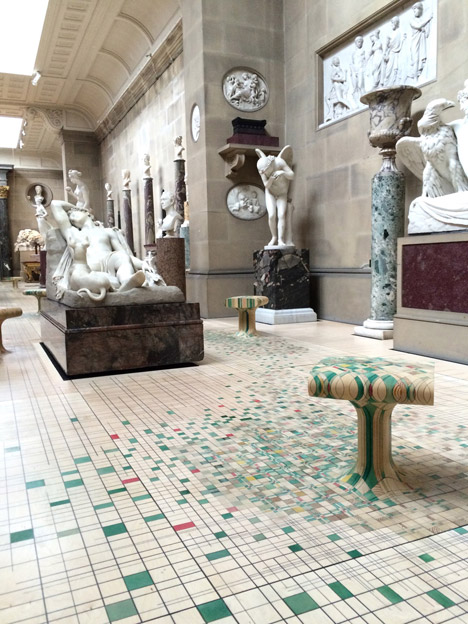 A coloured pathway winds via the area of the gallery, leading from one particular bench to an additional. Each and every seat is very carefully positioned to allow the sitter to view certain marble sculptures.

The idea for the path evolved from an earlier strategy to produce a maze-like layout all around the sculptures.

“The residence is remarkable, especially coming from the vast landscape,” Alkalay told Dezeen. “So there was this discussion about turning it into a backyard, almost like a French backyard, you have the maze and then you see sculptures. There had been a couple of sketches but it was not working very well, but there is some thing of a backyard nonetheless – nearly a path through it.” 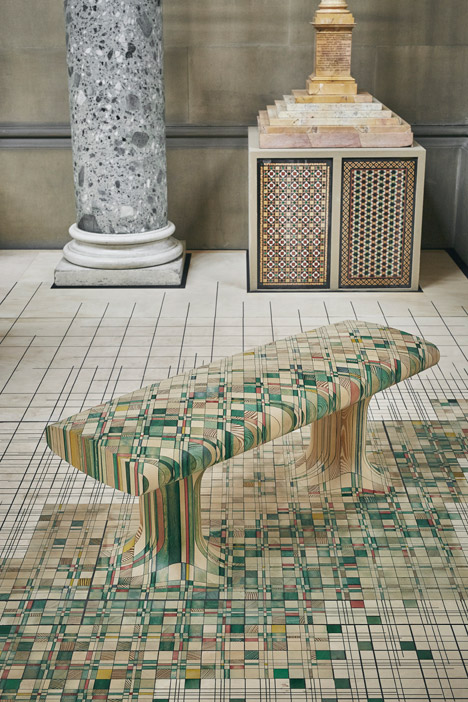 The installation is named soon after the Endgrain method created by the studio, which harnesses the grain of the wood to carry dye right the way by way of sections of timber. Blocks dyed in various pigments are then glued collectively with the grains facing vertically to create 3-dimensional patterns, and then shaped with a laptop numerically controlled (CNC) machine.

“We do the blocks and then it goes to CNC cutting,” mentioned the designers. “So in the starting it is really crafty and at the finish it is really industrial.” 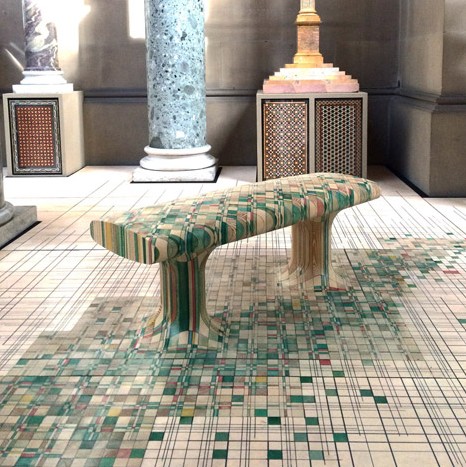 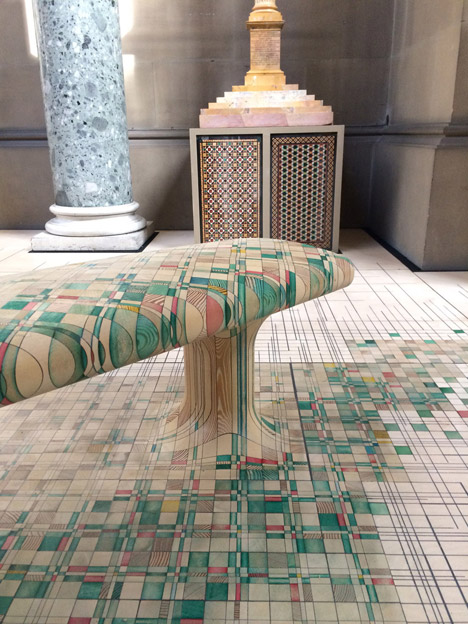 “We often had issues with the high site visitors areas of the stained floor, which would fade soon after some time,” said Akalay. “In the studio we believed ‘how can we discover a way to soak the stain by means of the wood, so even if you sand it the colour would nevertheless be there’?” 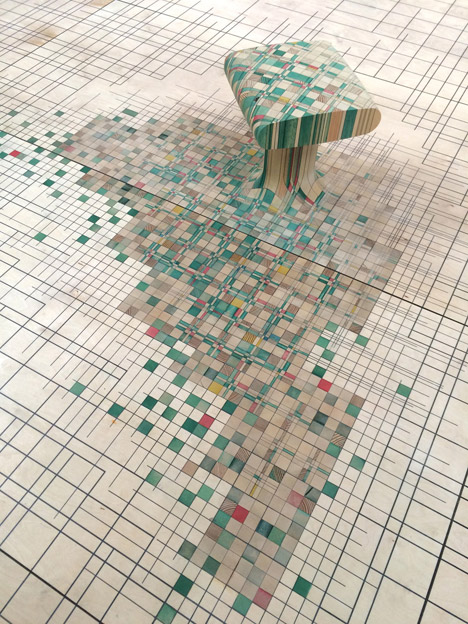 Unlike the Endgrain furnishings pieces produced previously by the duo – which are formed from jelutong timber – the seats in the Chatsworth installation are produced up of blocks of birch ply, with strips of black veneer sandwiched among them to generate the grid pattern. The minimize edges reveal angled slices by means of this grid, displaying the varying pigments. 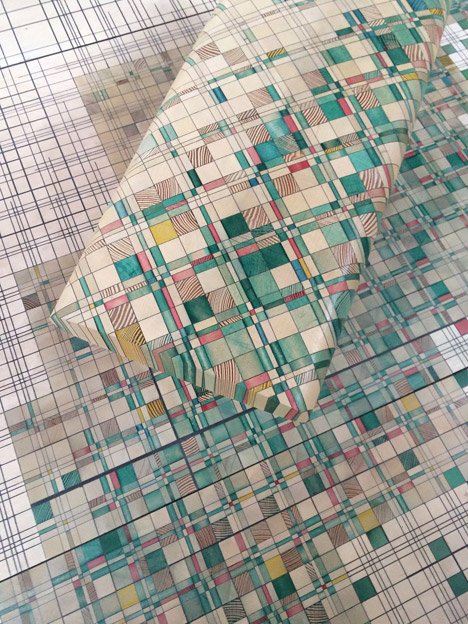 These coloured seats had been placed into holes in the patterned plywood boards across the floor, cautiously ensuring the grid pattern lined up. The task took a fortnight to design but three weeks to install. “[The installation] was truly complicated since you can not move any of the sculptures, so they had to function about them and program every thing,” Akalay told Dezeen.

The green and red pigments have been chosen to relate to the mosaics that can be seen on panels on the plinths in the gallery. 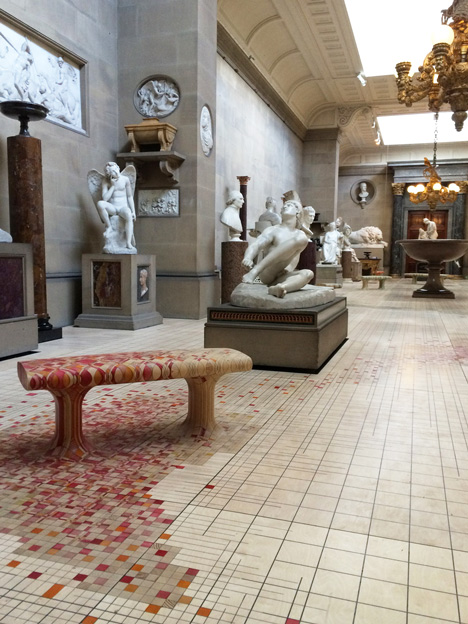 “I feel what was so wonderful was that their concepts had been so sympathetic to the surroundings but without having being overawed by it, and they had been influenced by some of the design and style information in Chatsworth too,” explained exhibition curator Hannah Obee.

“When this gallery was manufactured by the sixth Duke of Devonshire in the 19th century, he actually wanted the floor to be Swedish porphyry but in the finish it was as well high-priced even for him,” explained Obee. “A single of the things that is fantastic is that we’ve come complete circle. Raw Edges have introduced coloured flooring into the space which the man behind the gallery needed originally.” 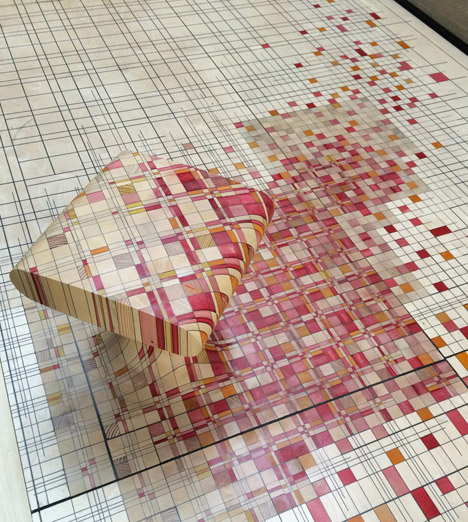 The Endgrain technique has been nominated for the Design and style Museum’s Types of the 12 months 2015, which will be awarded later on this yr.

Make Your self Cozy at Chatsworth contains another specially commissioned piece by Tom Price: a pair of blocks – a single created from coal and the other from transparent resin – that occupy the Elizabethan chapel. 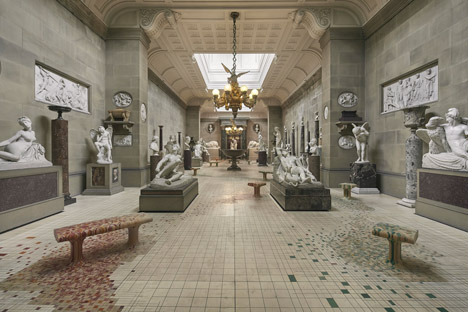 A series of contemporary chairs by designers such as Marc Newson, Amanda Levete, Thomas Heatherwick and Moritz Waldemeyer are also exhibited about the home.

Make Oneself Cozy at Chatsworth is on show till 23 October 2015.

Pictures courtesy of Chatsworth House Believe in, except if otherwise stated.