Carousels of amputated human body parts perform choreography to a score of dramatic music punctuated by the sound of pneumatic pumps in an installation by British artist Peter William Holden in London . 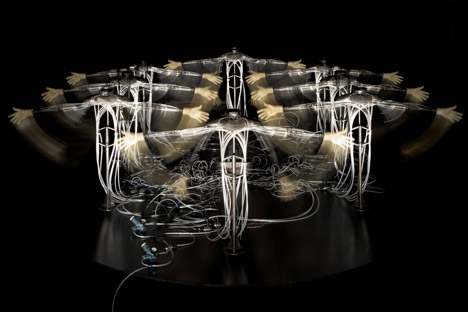 The Leipzig-based artist designed the mechanised sculptures, made up of life-like limbs mounted on steel frames, to perform ritualistic movements to well-known classical music by Sergei Prokofiev and Johann Strauss.

“I have attempted to create work which falls somewhere between conventional notions of pictorial art and a kind of performance,” Holden told Dezeen. 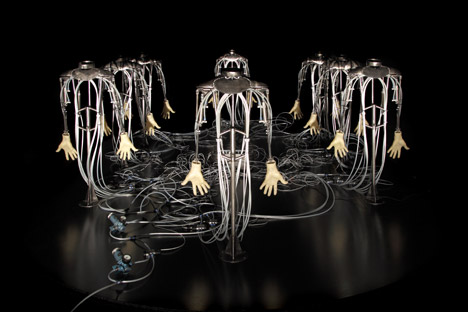 The kinetic sculptures are driven by pneumatic air pumps which sound each time the limbs move. The cabling, steel frames and air valves of the works’ construction are left exposed.

In a piece influenced by Mary Shelly’s Frankenstein, named Arabesque, human-scale arms and legs skewered on metal rods react to music by Strauss.

A circle of prosthetic legs flex at the knee, kicking in time to the music, while four pairs of arms severed at the elbow, flop back and forth in the centre of the platform. 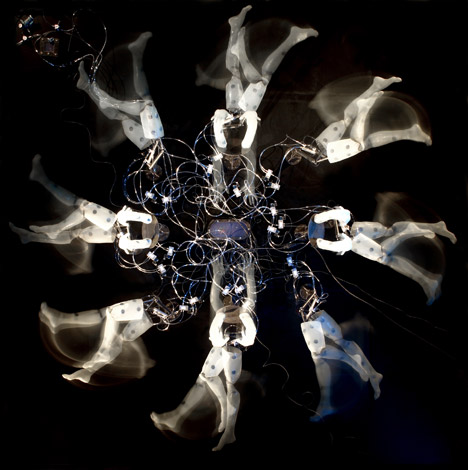 “The limbs, translucent and livid, bare their internal robotic mechanisms to the gaze of the viewer. The wiring is an aesthetic expression, deliberately integrated into the installation to bring chaotic lines of abstract form to contrast with the organised symmetry of the body parts,” said the artist.

As the compressed air pushes the parts into motion the air valves “exhale loudly” and the metal frames clack. 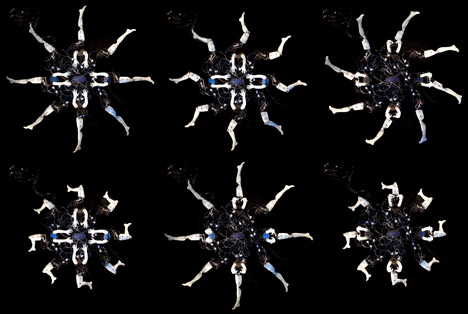 “This combined with the rattle of relays and the tandem clattering of pistons produces a hyper-modern accompaniment to the music of Strauss,” he said.

On another circular base, eight black and white tap-shoes perform a rhythmic dance in SoleNoid β. The heel-toe movements of the shoes and the sound of tap-dancing are synced using a computer.

The final work, named Vicious Circle, is inspired by the artist’s interest in the Industrial Revolution.

“It is a brutalist robotic structure and it is a representation of some of the fears I have with technology,” said Holden. 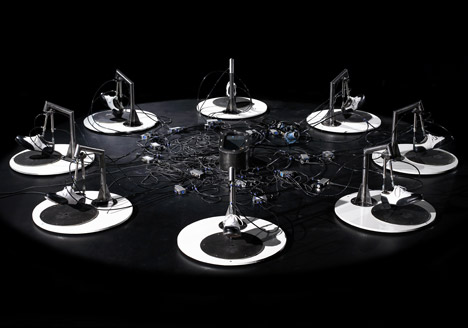 Rubberised hands attached to metal-framed structures that appear like decapitated bodies rise and fall in time to Prokofiev’s Dance of the Knights.

“The motion of the machine reminds me of the relentless movement of progress as the machine moves to its predetermined program, ignorant of its environment and unwilling to stop if anything gets in its way,” he said.

“Though paradoxically it is possible to see beauty within its movements, reminding me that technology is a double edged sword and we, humanity, have the possibility to decide which direction it will take.”

Merge Festival takes place in venues across the capital until 19 October 2014.

Photography is by Matthias Möller

Decorating Ideas
Music: French director Porthé has animated a series of cubes to zoom out from the scale of an atom to a whole universe for this...