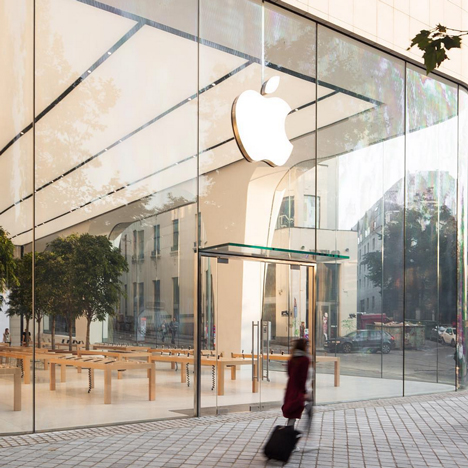 Apple has lifted the veil on the very first of its store interiors given that Jonathan Ive grew to become chief layout officer, at the tech giant’s new outpost in the Belgian capital.

Local press has been given a sneak peak at the Apple Shop Brussels, which opens tomorrow on Avenue de la Toison d’Or to coincide with the launch of the Apple View in Belgium.

The store’s interior is the 1st to be overseen by British designer Ive, who took full control of the company’s design and style division in Could 2015.

He has continued the use of minimal colour and materials palettes identified in earlier merchants, with the exact same light-toned walls, wooden benches and glass facades.

The glass curves close to two sides of the corner building, extending to the full double height of the interior. Two sculptural columns break up the glazing.

Light boxes lengthen the length of the ceiling, similar to these found in Foster + Partner’s Apple Keep in Hangzhou, China.

Rows of the chunky tables created from sequoia wood current laptops, phones and tablets, although equipment are displayed within a situation that runs along the longest wall.

On the far wall, a massive display is also utilized to showcase the brand’s merchandise. Two lines of trees kept in giant white pots add a touch of greenery to the centre of the room.

The store’s opening comes a week after Apple launched a variety of new and up to date items at its annual conference, which includes a stylus for technical drawing, new versions of the iPhone six and an Apple Observe collaboration with Hermès.

In 2013, Apple trademarked the style and layout of its retail stores nine many years after the first one opened in Virginia, USA. Its designer Tim Kobe told Dezeen that Apple’s retail presence is “not evolving as rapidly as it could be” and the company’s “momentum has slowed down” because founder Steve Jobs died in 2011.