News: a TU Delft graduate has presented an unmanned aerial vehicle with built-in defibrillation equipment, which could fly to a patient suffering from a heart attack in a fraction of the time it would take an ambulance to drive (+ movie). 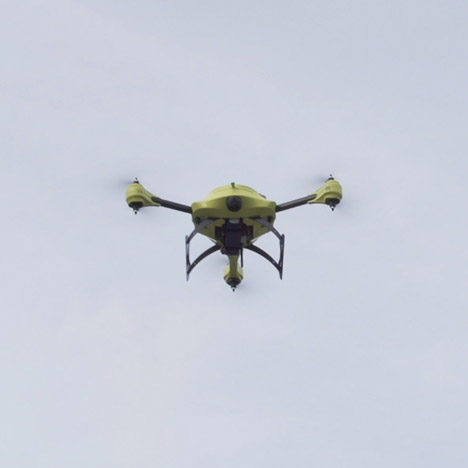 “With the Ambulance Drone, it is possible to deliver defibrillation to any patient in a 12-square-kilometre (4.6-square-mile) area within one minute,” claimed graduate designer Alec Momont. “At that speed, survival rates can be as high as 80 per cent.”

The TU Delft graduate has invented a series of unmanned aerial vehicles (UAV), also known as drones, that could fly directly to an accident scene and provide life-saving medical equipment to an individual in need. 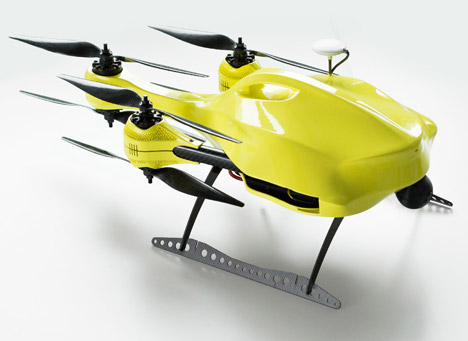 Momont’s first prototype incorporates an automated external defibrillator (AED), which can be used to jump-start the heart in the event of a cardiac arrest.

“In the European Union around 800,000 people per year suffer from a cardiac arrest, an upsetting number considering that only eight per cent survives this incident,” Momont said. 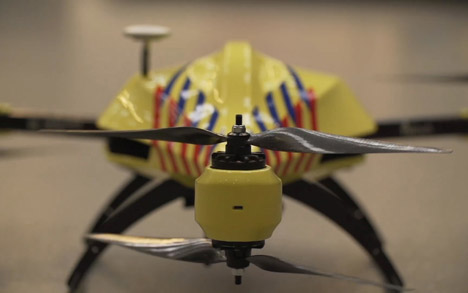 “The main reason for this high number of casualties is the relatively slow response time of emergency services – 10 minutes. Brain death and permanent death start to occur in just four to six minutes.”

The yellow-painted drone features six propellors divided across three arms, which enable the vehicle to fly at speeds of up to 60 miles per hour. 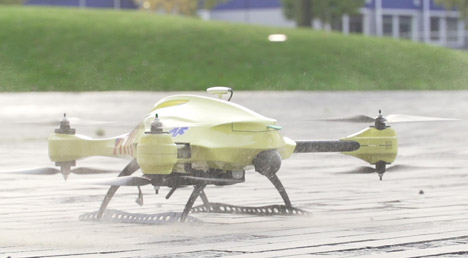 Momont’s design utilises the vehicle’s frame to carry the compact equipment inside, which can be unpacked once the drone lands and used by anyone on the scene who’s able to follow the included instructions.

The drone would also incorporate a two-way video channel that operators could use to assess the situation and provide advice to responders attending the accident.

According to Momont, emergency medication and cardiopulmonary resuscitation (CPR) aids could also be delivered in the same way. 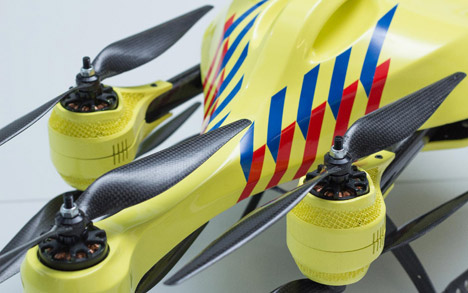 “In short, the Ambulance Drone helps to save lives by extending existing emergency infrastructure with a network of fast and compact UAVs capable of bringing emergency supplies and establishing communication, anywhere,” he said.

The Ambulance Drone forms part of Momont’s report for his Master thesis, focussing on positive ways in which UAVs can be used.

Unmanned aerial vehicles have come under scrutiny in the media for their potential use in warfare, and issues surrounding privacy and safety. An installation of flying drones planned for this year’s London Design Festival was cancelled over fears for “safety of members of the public”. 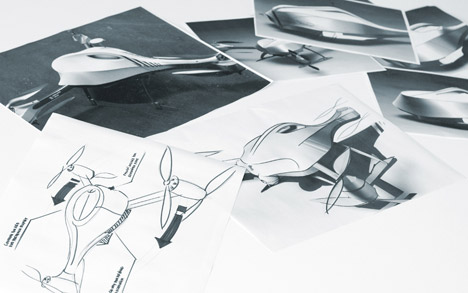 “Drones are still commonly associated with destruction due their usage in clandestine operations by the United States of America,” said Momont. “Within this project the focus laid on using drones for a good purpose. One of the search directions was the ambulance drone, which was further developed.”

Following his graduation on Tuesday, when the prototype was presented at TU Delft, Momont is looking to continue the development of the project.

Other recent drone projects have included a collaboration between Canadian circus troupe Cirque du Soleil and researchers at Swiss university ETH Zurich to produce a flock of flying dancing lampshades. Last year, researchers at ETH revealed that they had created 3D-printed drones that were capable of self-assembly.

Why Do All Zippers Have the Letters YKK on Them?

“Open-plan Living Was So Last Decade”

Luxury Caravan – Advantages And Disadvantages Of Life On Wheels