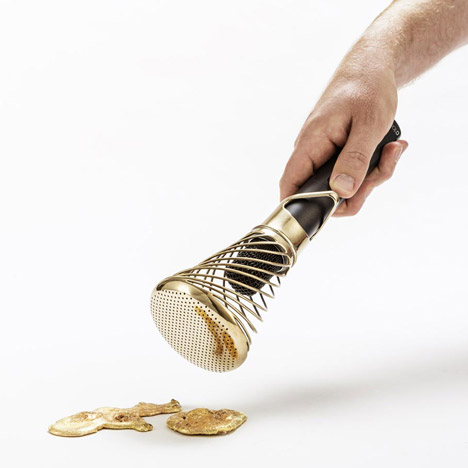 PostlerFerguson created the microphone accessories for Viennese DJ and music producer DJ Ken Hayakawa, who bases his compositions on snippets of sound recorded in the field as part of Vienna Design Week’s Passionswege program, which pairs international designers with local craftspeople.

Matched with A.E. Köchert, a Viennese jewellery house founded in 1814 that once supplied jewels to the Imperial court, PostlerFerguson designed two attachments for the AKG C1000 microphones used by Hayakawa to record his samples. 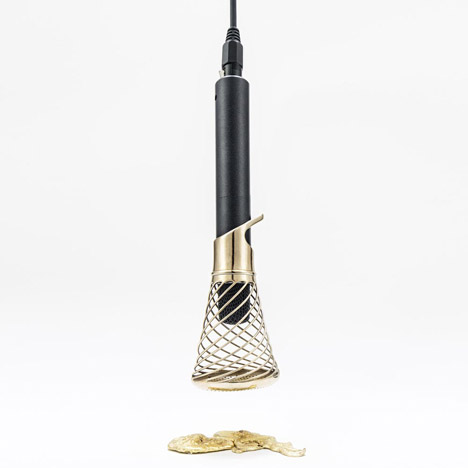 To create the pieces, the designers and jewellers made 3D-printed moulds, which were used to cast molten brass.

“Since we are really an industrial design based outfit we wanted to push the boundaries of what a modern jeweller can do in case of applying its craft and skillset to an industrial product,” explained PostlerFerguson co-founder Martin Postler.

“The whole approach was extremely industrial from our side, which then got pretty hand-craft focused since Köchert made the pieces by hand in their in-house workshop.” 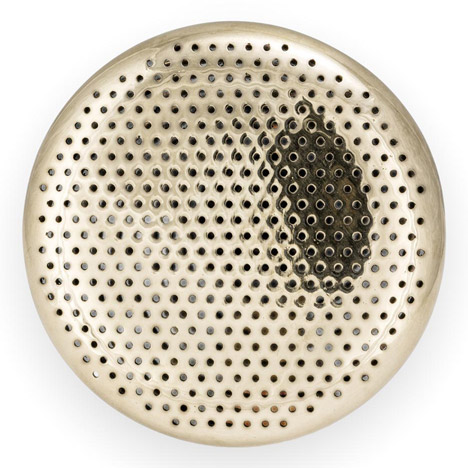 “We really thought of Ken as a brand as well. As much as people like Daft Punk have their helmets, we thought of him using these pieces during a process – field recording – that is normally pretty invisible as something visually more spectacular,” Postler told Dezeen.

A large brass cone with a flat covered end provides a shield for the microphone that also allows it to balance on a flat surface to record ambient noises.

The sides of the cone are formed from spirals of metal that merge into the circular base, which is perforated with small round holes. This design “both filters the sound as well as makes it possible to stand the mic upright while protecting the recording part and acting as a shock absorbing spring,” explained Postler. 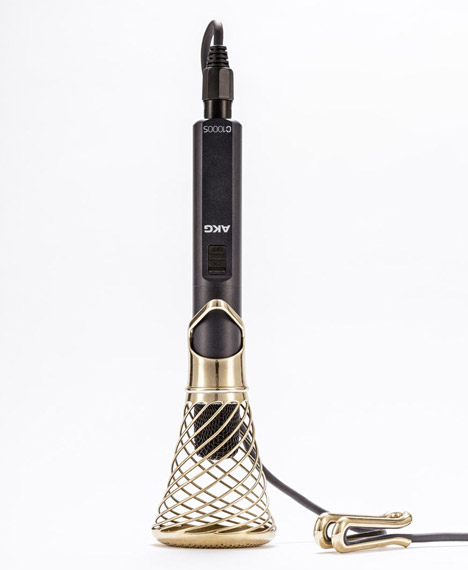 At the top a solid circle of brass slots over the microphone handle to provide a secure attachment. A protruding triangular loop of metal forms a finger grip that can be used to help add and remove the cover.

A matching brass cable clip serves two potential functions – attaching the microphone’s cable to a bag or another item to provide steady support or creating a hook to hang the microphone off. 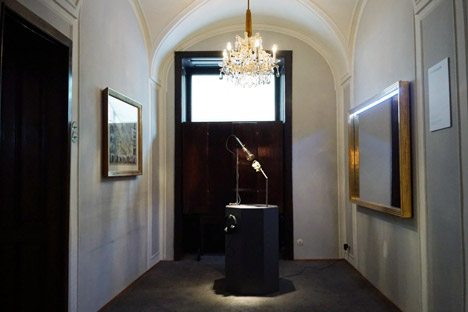 “The mix of functionality and style reflects the modern obsession of having our accessories, like phones and headphones, reflect our personality while also continuing the tradition of the Sisi Stars, a line of jewellery and accessories first created for the Empress Elisabeth in the 1800’s by Köchert,” added PostlerFerguson.

The pieces are on display as part of an installation at the jewellery firm’s store in Vienna during the design week, accompanied by a soundtrack by Hayakawa that was created by mixing recordings of noises made by craftspeople during production of the microphone cover and clip.