Hello my friends! It’s a lovely rainy fall day here, and what I think will be the last warm day we have in quite some time. I’m actually excited about that. 🙂 I’m tired of sweating – bring on the crisp air, yoga pants and boots!

I finally did something in another part of the house other than the family room…can you believe it?

A while back I took the drapes down that used to hang in the living room: 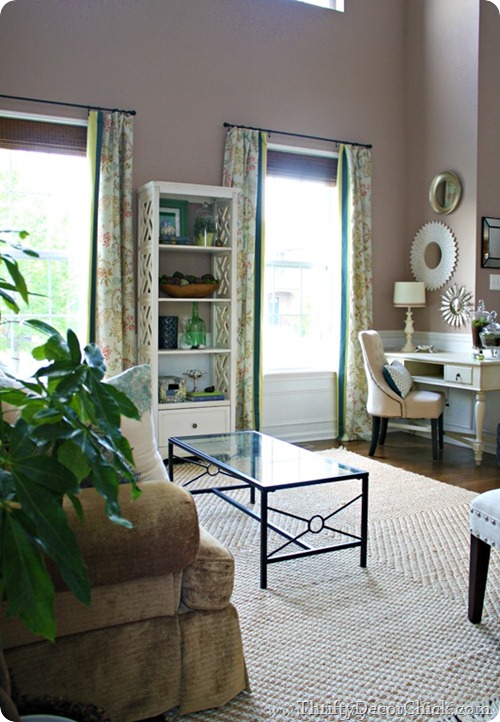 This was in the pink wall era, so glad that color is gone! (They weren’t really pink but sure photographed that way.)

Anyway, I took those drapes down after I added new trim to the windows up front: 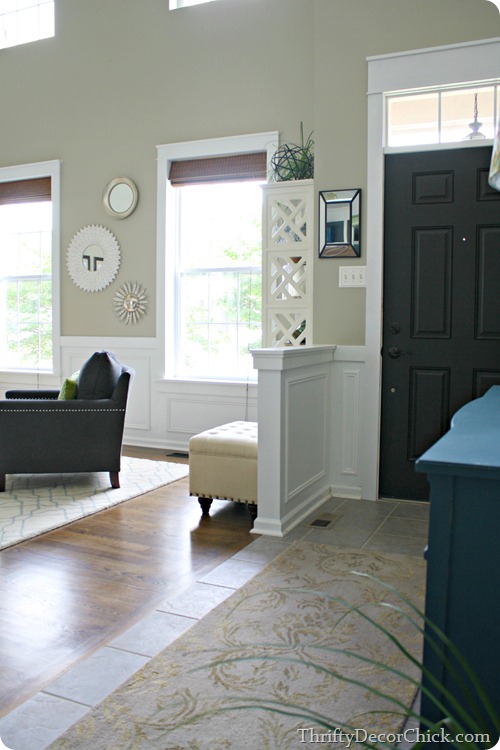 I like them simple like that – so much so that I don’t have any plans to put new drapes up, at least for now.

I got to thinking that our dining room windows could really use something though. I do plan to trim them out the same way but in the meantime they were looking pretty bland: 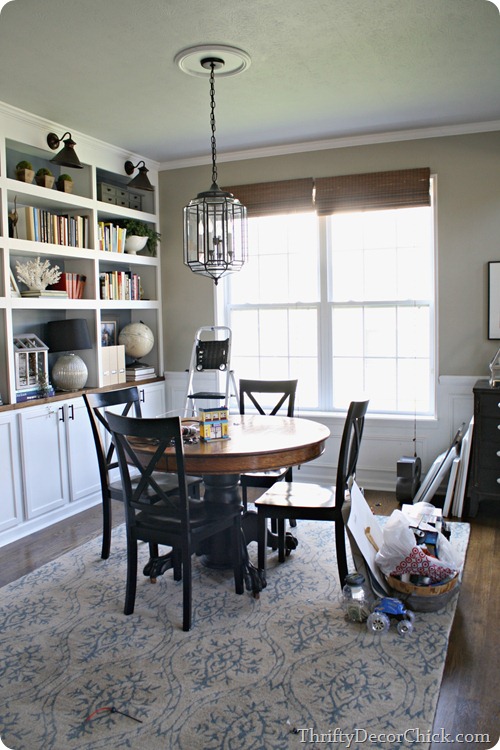 This was my before picture as I started working – excuse the mess. 🙂

I took down the drapes that were the dining room years ago moved them to the family room: 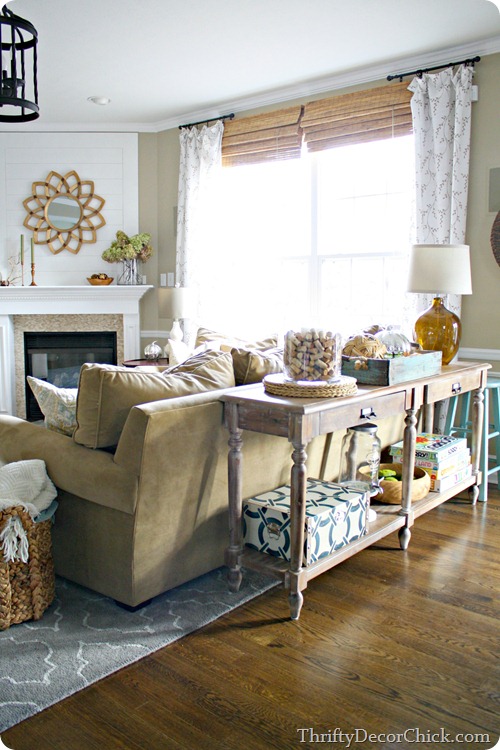 When the wall came down those drapes did as well.

Anyway…I’ve had naked windows in the dining room for quite some time – I’ve been wanting to replace them but it hasn’t been a priority. Then I realized a couple weeks back I could use the drapes from the living room that I took down months ago. Are you with me?? 😉 We’re coming full circle here. Kinda.

Of course it can never be as simple as just hanging drapes for me. There’s always all kinds of little things that pop up along the way. The first thing I did was move the roman shades back down to inside the window frame. Years ago I mounted them outside just for a little extra light. It’s felt messy looking to me lately though and it only gives a couple extra inches of extra light so back they went.

I had to patch where the shades were hanging: 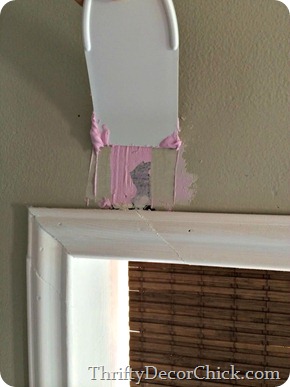 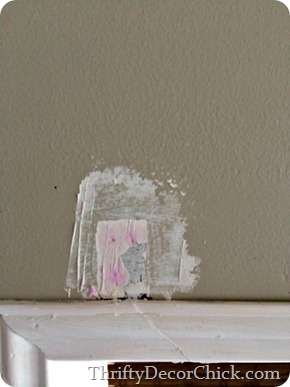 When I took the brackets down they took chunks of drywall with them. Not sure why that happened – usually you’ll have problems with that if you put them up right after painting but I didn’t do that.

Anyway, I patched those up with spackling – this kind goes on pink and is white when it’s ready to paint/sand:

Hanging drapery hardware isn’t hard, it’s just a matter of hanging the brackets the exact same distance on either side of the window. I like to go out at least five inches from the window and usually at least a few above as well – I couldn’t go too high with these because I didn’t make them long enough.

I just trace where the holes go in the bracket and then drill a pilot hole: 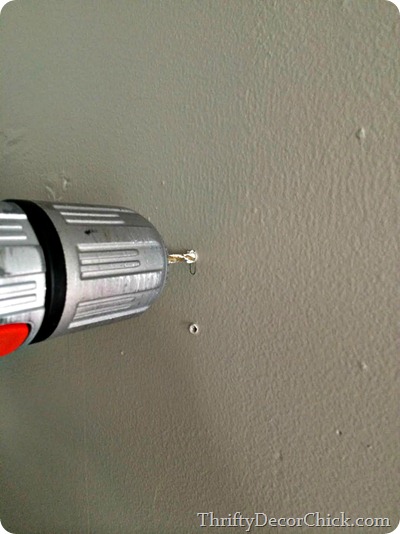 I always drill a hole first before trying to get a screw in the wall – if I hit a stud then I’ll need to predrill anyway. If I don’t hit a stud I know I’ll need to use anchors, so it’s a time saver to just do that first.

I got the hardware up on both sides and then realized the middle piece was going to hit the small molding I had around the window. Sooooo that had to come down…more patching and then painting to cover up the original chocolate brown color underneath: 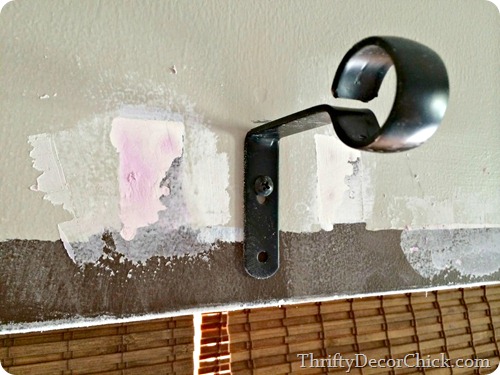 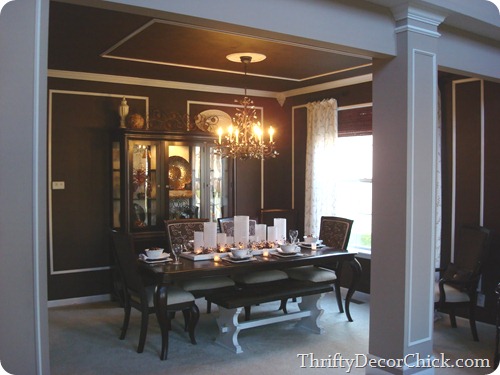 So THEN I get the drapes hung up and realize I didn’t like the stripes I added as a leading edge years back. I was using two panels on each side of the windows so the stripes were on either side of each one and it looked circus-esque. Not what I was going for.

So I took them down, cut down the sides quite a bit and hemmed. I just left a bit of the stripes and I quite love the dark on the edges now: 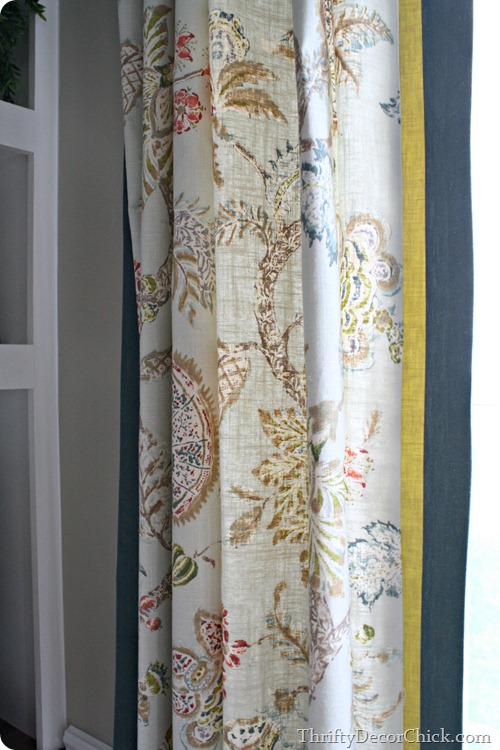 I get asked about his fabric a lot – it’s a P. Kaufman fabric called retreat blue citrine. I’d like something a little simpler in this room eventually but until then these will do nicely. 🙂

I “trained” the drapes like I showed you here years ago: 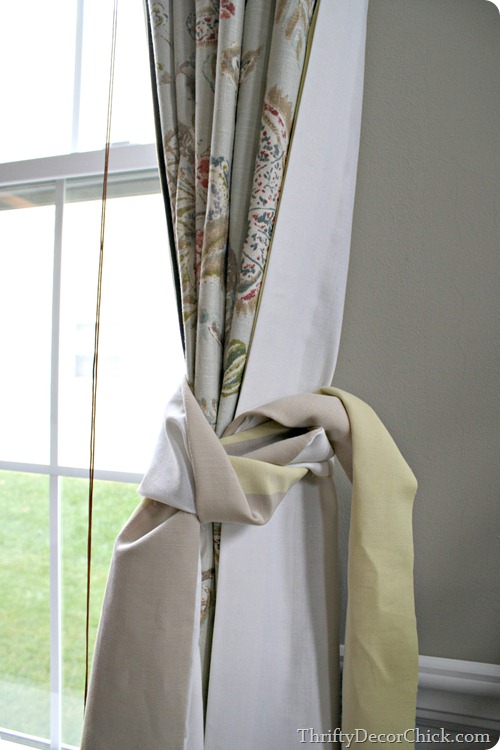 Combined with my fake pleat method it makes them hang much prettier!

They add some warmth to the room and make it feel much more finished: 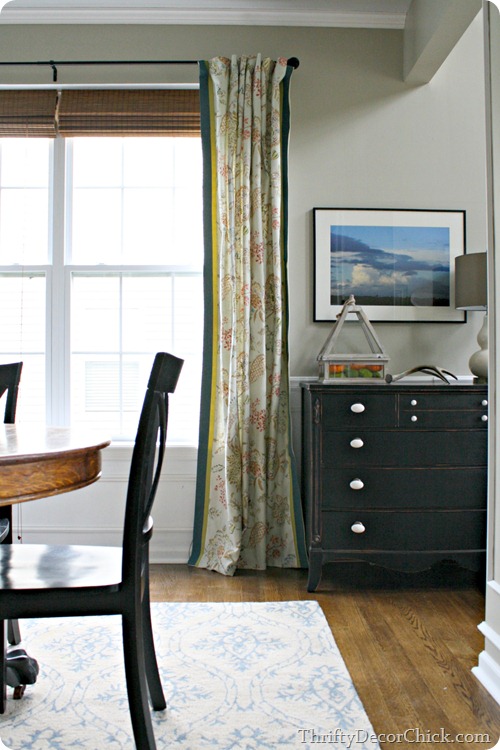 I’m so glad I took some of the stripes off – they look SO much better with just the simple color along the side: 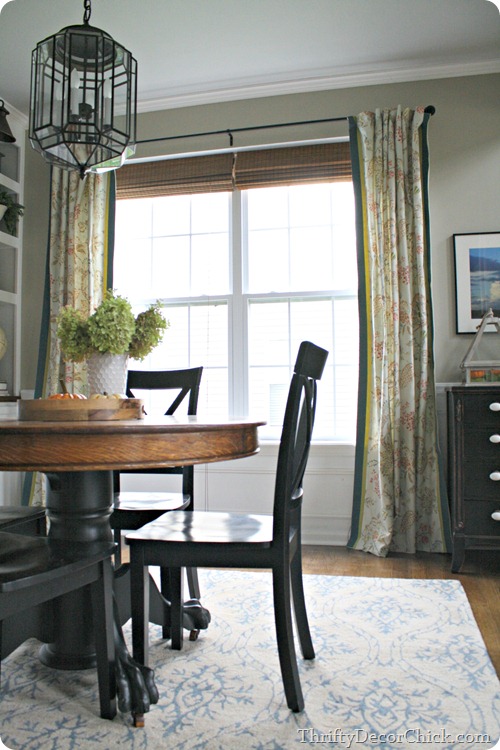 These are two skinny panels together on each side – I cut the fabric down the middle for the other windows. I didn’t sew them together and you can’t tell. 🙂

I hung these along a full drapery rod so we can close them if needed: 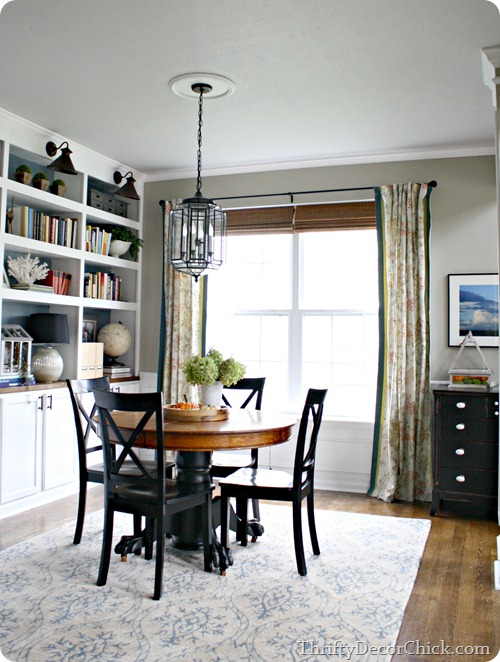 I hear we’re going to get another nasty winter and I like being able to close drapes for some added insulation. It helps!

The colors are lovely – the blue edge matches the background on the built ins almost perfectly. Someday I will add the window trim in here but I will still probably keep drapes up even after that. They definitely add some coziness to a room!: 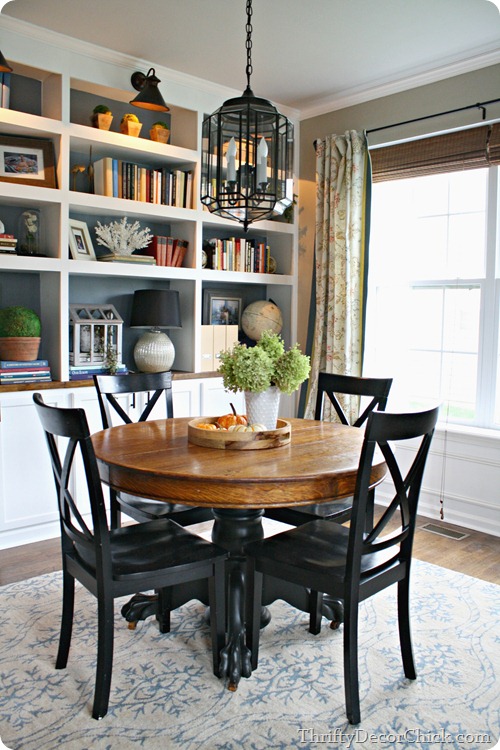 This project ended up taking a lot longer than I thought it would, but it was free so I can’t complain. 🙂 Another fall nesting project done!

Do you prefer drapes or none? Do you use yours if you have them? We use our bedroom drapes every weekend so the bedroom is crazy dark, love it. If you want your drapes to be full and pretty while closed you’ll want to add to your yardage to make them wider. I don’t spend money on that since they are usually only closed at night and it’s just us who sees them.

OH and we were waffling on keeping a table in this room but now that our kitchen table is plenty big I think we’re going to move ahead with our original idea of comfy chairs and a coffee table. Whoot! I think it will look lovely!