Dutch architecture company MVRDV has won a competition to layout the Cultural Cluster in the heart of the city of Zaanstad, with a proposal to group several institutions inside one constructing – every single with their very own house-shaped presence on the facade.

MVRDV was selected by the Dutch municipality of Zaanstad, North Holland, for the task, which will occupy a site near to the Inntel Hotel – a developing with a facade created of stacked green homes in classic nearby designs.

The seven,500-square-metre Cultural Cluster, which also neighbours the train station and city hall, is part of a wider masterplan for the city centre.

Led by architect Sjoerd Soeters, the main goal of the strategy is to develop a “new Zaan type” with a series of buildings that reference the nearby vernacular identified in the 18th- and 19th-century buildings at the close by UNESCO heritage site of Zaanse Schans. 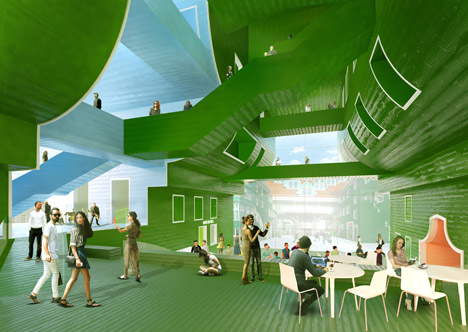 MVRDV’s design and style responds to this overarching objective by including a series of in a different way sized voids around the facades of the cubic developing, each shaped like the outline of a Dutch home. Inside, every single area is lined with coloured wood, even though the outdoors of the building is patterned with a motif found in conventional Dutch wallpaper.

“We started out with a compact volume and then turned the typical Zaan house inside out, creating an urban living space,” explained MVRDV co-founder Jacob van Rijs. “On the exterior facade, a wallpaper motif contrasts with interior spaces clad in the green wooden facades so common of the Zaan area.”

The five major occupants will be a film centre, a executing and visual arts centre, a pop music centre, a music college and a centre for design. The developing will also residence a library and a regional radio station.

The greatest of the voids sits in the middle of the developing, opening out onto the square in front of the city hall, and is known as the Zaan Living Space. It is lined with the bright green-painted wood commonly utilised for home facades in the location. 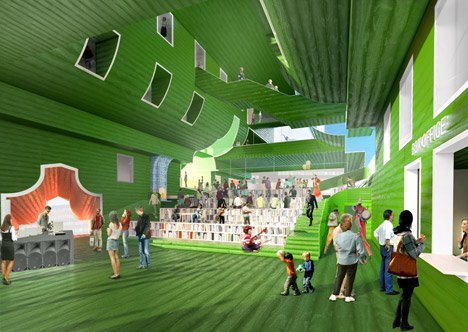 “In this central area, all of the distinct programmatic aspects are linked and come with each other,” mentioned MVRDV.

“An urban-scaled room in which all kinds of guests will be welcome: the audiences of the a variety of institutions as well as waiting commuters or consumers that may just want to make use of the dining establishments within the constructing.”

On the ground floor, a live music venue will have area for 500 people and is developed to accommodate various kinds of events. The constructing will also have a amount of versatile function spaces, cinema rooms, workshops and dance studios as well as a committed radio studio.

The whole creating will sit in a raised pedestrian square, with bicycle parking and an underground road beneath.

“The entrance to this bicycle parking is, like the building’s other voids, designed as a silhouette of a Zaan property,” said MVRDV. “From the raised square, a bicycle path prospects down to street level.” 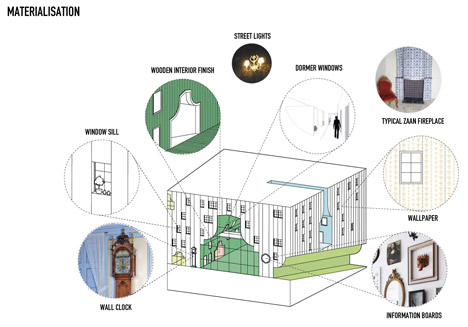 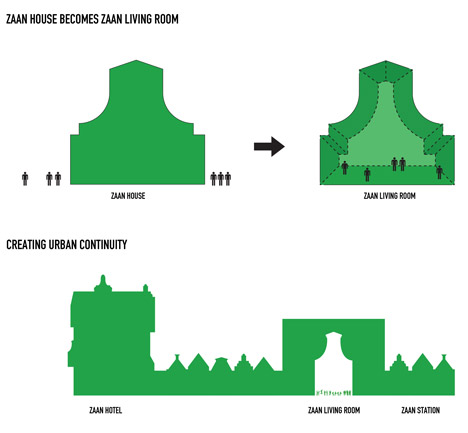