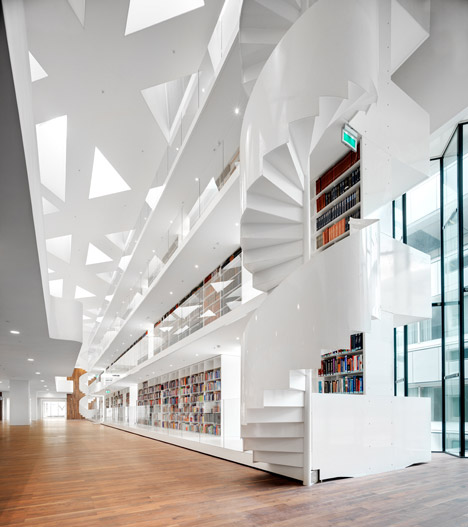 The Education Center forms part of the Erasmus Medical Center in Rotterdam – a teaching hospital originally designed in 1965 by Dutch architect Arie Hagoort in collaboration with iconic French designer Jean Prouvé. It was recently extended by EGM Architecten. 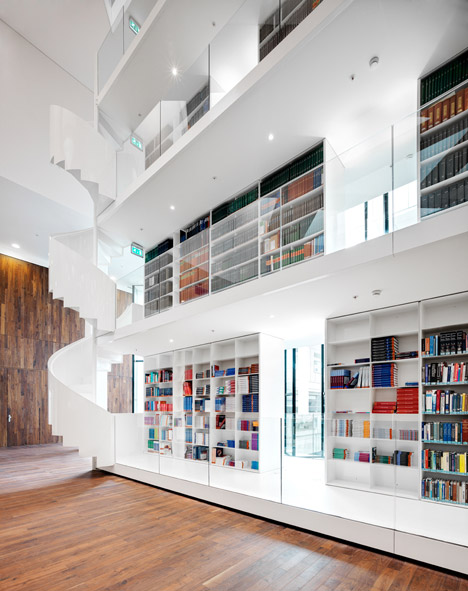 The brief to Rotterdam-based Kaan Architecten was to unite teaching, research and patient-care facilities under one roof. Their response was to create a space that centres around a triple-height atrium, including a library, two elevated lecture theatres, a cafe and offices. 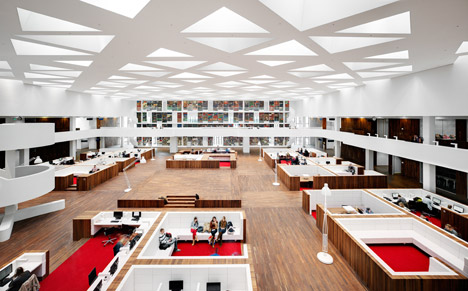 The facility occupies a former open-air courtyard on the roof of a car park, which previously functioned as the hospital’s primary entrance. This setup was largely unsuccessful, said Kaan Architecten, with patients and staff choosing alternative routes into the building. This prompted the decision to cover and repurpose the space, with the addition of a new roof. 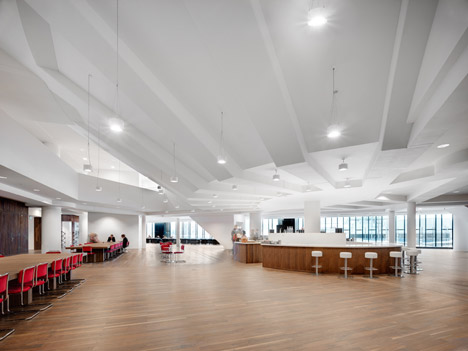 “This concept was problematic; access was closed and soon people started using the third floor as the main indoor circulation system,” explained the architects. 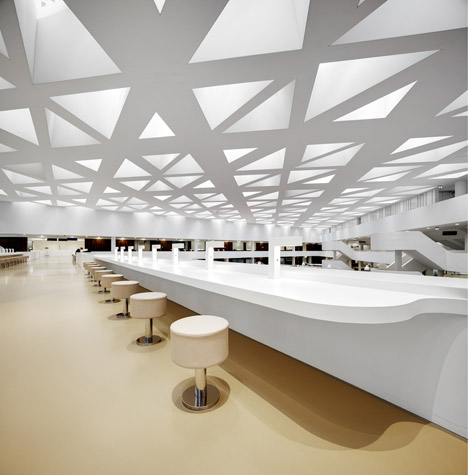 “The new design provides a roof over this space, rather than placing the different programmes – which include medicine, surgery, general medical practice and midwifery – in separate adjacent wings,” the architects said.

“This design merges all student-related programmes into one central square, where students from all of the medical disciplines meet.” 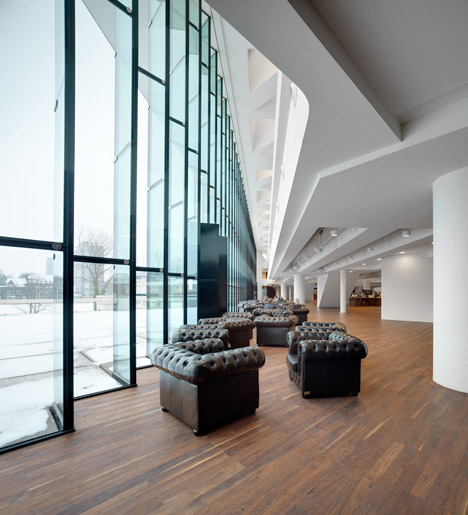 The lattice-patterned roof, made up from criss-crossed beams and angled triangular skylights, is intended to work with the diagonal construction lines present in the existing hospital building. 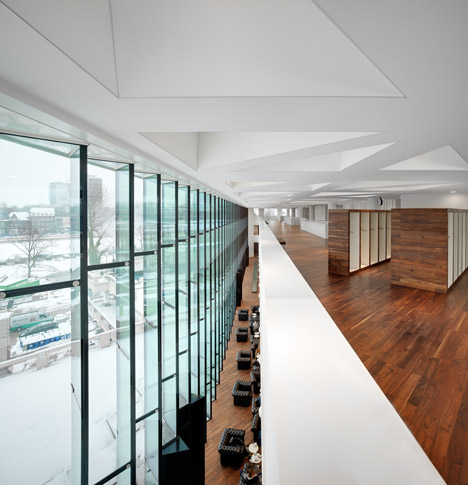 On one side, the roof adjoins the existing structure. It extends out to meet a transparent wall on the other side, comprising a zigzagging arrangement of glass. 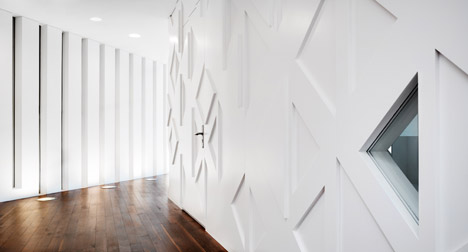 “The roof creates a feeling of space, provides daylight and general lighting and diffuses noise,” said the architects. “Concrete beams, a gift of the 50-year-old construction, were integrated to bear the load.” 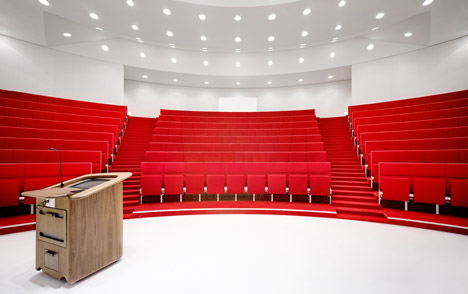 A 35-metre-tall bookcase spans one side of the atrium. High shelves can be accessed by ascending one of two slender spiral staircases. 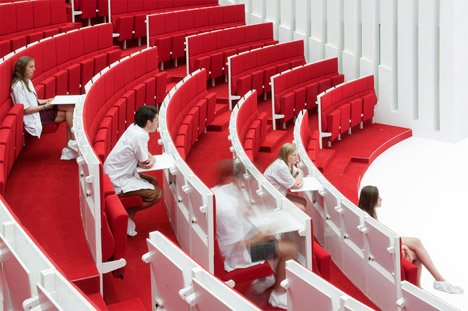 A second network of elevated walkways is accessed by a pair of chunkier staircases – remnants of the original courtyard – that supply classrooms, offices and lecture theatres set on the upper floors of the building.

The lecture theatres are furnished with arched banks of red or brown upholstered seats. 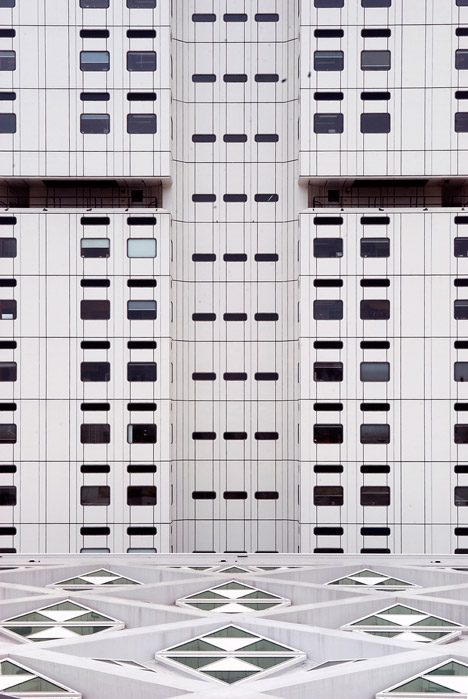 To celebrate the project’s nomination for the Mies van der Rohe Award 2015, Dutch documentary filmmaker Victor Vroegindeweij made a short film about the building. Called The Learn’d, it takes its name from When I heard the Learn’d Astronomer, a poem by American writer Walt Whitman. 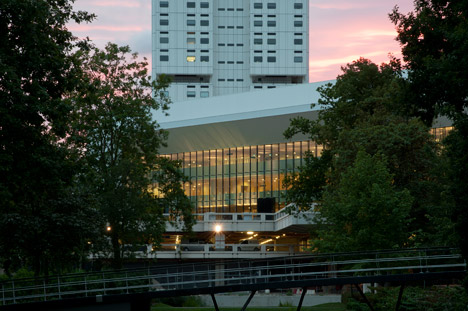 “The Education Center is part of an imposing medical city, a post-war concrete jungle shaped by pragmatism and cost-cut,” said Vroegindeweij. “I was surprised to come across this oasis of humanism and softness, at the very heart of it.” 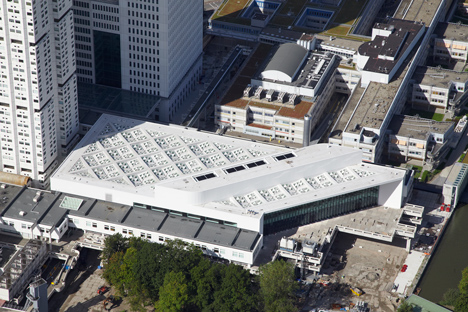 Photography is by Bart Gosselin, unless otherwise specified.

Cool Stool In Metal For Inspiring Me!