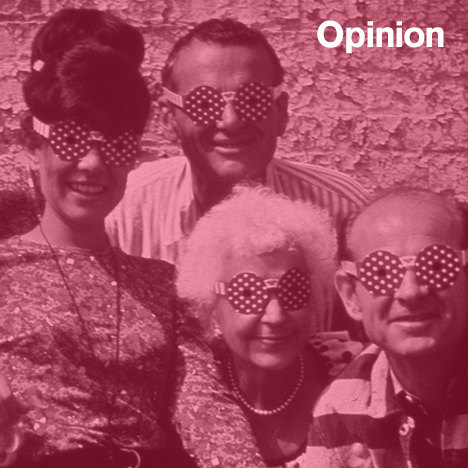 Opinion: designers today are being swamped with visual information that has been stripped of its historical context. Making personal connections across generations can help fill the gaps, says Mimi Zeiger.

“Could life be more beautiful?” wrote Deborah Sussman on 1 November 1954 in a letter home to her parents. A young designer living in the Eames house and working for the office, she would become the environmental designer responsible for the iconic colourful graphics of the 1984 Los Angeles Olympics and countless bold visions, including the cartoonish lettering used on the billboard for the 1972 documentary Reyner Banham Loves Los Angeles.

Sussman passed away in August. Sharply present on the LA scene, even at 83, she had been quietly fighting breast cancer over the last year and news of her death was a sad shock to the design and architecture community. How could someone so vital be gone? Graphic designer April Greiman recalled a story of petite Sussman introducing herself by saying, “I’m kinda a big deal”.

I never knew Sussman very well. I saw her at events and openings around town from time to time. Last winter I visited the designer just before of the opening of Deborah Sussman Loves Los Angeles, an exhibition that showcased works from early in her career. Late in our conversation she produced her letter written some 60 years earlier and began to read. “Now, don’t you dare worry about a thing,” she wrote to her concerned parents in Brooklyn from the Eames House. “Your worries sound inconceivable. Also, as for smog, there is just never any here. I’m living in the country and smog occurs only downtown, whereas I told you, I never go, as it is too far away… Imagine waking here, looking out at eucalyptus leaves, touching the glass walls, trees 90 feet high, looking through them over a long, wide meadow and beyond that, the sea and the shadows of the leaves moving in the sunlight.”

Bridging the span of history isn’t a nostalgic impulse

Talking to Sussman didn’t just reanimate the past, it offered a new perspective on a canonical piece of architecture and a period in LA that glints brightly in the rear view mirror. When designers connect across generations via conversation, or are even allowed to read private letters, the outcome of that intimate exchange ultimately is a better understanding of where they stand in the greater design timeline.

Bridging the span of history isn’t a nostalgic impulse. It’s a perennial problem that requires a perennial calibration. Even artists in the 1960s, such as Ed Ruscha, looked to the past. “We were looking for precedents upon which to found a revolution — submerging ourselves in the murky swamp of unfashionable objects…” wrote art critic Dave Hickey.

Today, the past has never been so present, so at the ready to pilfer for design inspiration, but a case for revolution has yet to be made. Instead we just keep making more visual information more available, often removing it entirely from its original context.

We are swimming in a flood of historical content

“Through the power of big data we are suddenly able to view the world’s books not as merely piles of text, but as individualised galleries of one of the richest and most diverse museums of imagery in the world,” reads Flickr’s announcement.

For this generation, then, history is now a trove of artefacts ready for appropriation and derivations, and as accessible as a Google Image Search. We are swimming in a flood of historical content, but we are often missing the historical context.

With so much visual material available to be absorbed into the contemporary project, there’s a need to deepen the understanding of architecture and design’s cultural milieu – to understand where we came from so we can think more clearly about where we are headed.

To do so via the intimacy of conversation, of personal narrative, is to evade the self-satisfied swamp of images, which can only tell so much of the story.

I put the question of “Why connect?” to Barbara Bestor who, with Catherine Gudis, Thomas Kracauer and Shannon Starkey, organised Deborah Sussman Loves Los Angeles. “One of the things that older generations can teach us, aside from literal technique and historical preoccupations, is about the community that it takes to be productive,” she answered, stressing the importance of making a culture for design.

“There are all sorts of networks — like neural pathways — that connect designers, artisans, commercial clients, and provide a map to understand exactly just how these things, which we often venerate and worship, happened.”

For Bestor, intergenerational conversations can reveal just how human design culture really is, filled with complexity, happenstance, and politics.

In a recent conversation, textile, industrial and interior designer Gere Kavanaugh discussed the time in the 1960s when she shared studio space with Sussman, Don Chadwick (designer of the Aeron chair), and Frank Gehry on San Vicente Boulevard.

Kavanaugh, now in her 80s and still working, met Gehry in Victor Gruen’s office. She sketched out a familiar scene: designers and architects with something to prove working incredibly hard on underpaid (and non-paid) commissions. In her recollection, studio visitors formed a rotating cast of characters including artists Billy Al Bengston (Gehry designed his 1968 LACMA exhibition) and Judy Chicago, as well as illustrator Carlos Diniz.

For me, Kavanaugh’s story goes a long way in explaining why Diniz collaborated with Chicago and designer Peter Pearce on a speculative structure for Chicago’s installation The Dinner Party. I couldn’t understand why LA’s go-to architectural renderer for office towers and housing developments would create a fantastical proposal for the feminist artist. Diniz’s illustration of the project was shown as part of Everything Loose Will Land, a 2013 exhibition curated by Sylvia Lavin that unearthed many surprising artefacts — seductive objects and images — but also left some lingering whys.

Interestingly, Kavanaugh’s history suggests pluralism within the design community and few of the disciplinary silos we see today. But perhaps that conceit is my own wishful backward gaze and fosters the soothing revelation that the past is just as messy as the present.

At a time when we celebrate the emerging, the now, and the next, with the easy confidence that comes from social media, conversations across generations confirm communal connections and the daily sweat of design practice.

On the afternoon I met Sussman she was in the midst of moving her practice, Sussman/Prejza, established with her husband Paul Prejza in 1968. Archival papers and photographs were stacked in the living room awaiting sorting. “All my life I worked for other people, all my life I subjugated everything in my life to my work and to my clients and my collaborators,” she said and cast an eye over the materials that had been dormant in boxes for decades. “I feel that my duty to myself and to the world, is to share this part of history.”

Photograph of Deborah Sussman with members of the Eames Office wearing 4th of July Glasses designed by Sussman,
circa 1965.

Mimi Zeiger is a Los Angeles-based journalist and critic. She covers art, architecture, urbanism and design for a number of publications including The New York Times, Domus, Dwell, and Architect, where she is a contributing editor. Zeiger is author of New Museums, Tiny Houses and Micro Green: Tiny Houses in Nature. She is currently adjunct faculty in the Media Design Practices MFA program at Art Center. Zeiger also is editor and publisher of loud paper, a zine and blog dedicated to increasing the volume of architectural discourse.