Paris studio Du Besset-Lyon has converted and extended a 1930s sanatorium to generate a new school of architecture in the French city of Clermont-Ferrand (+ slideshow). 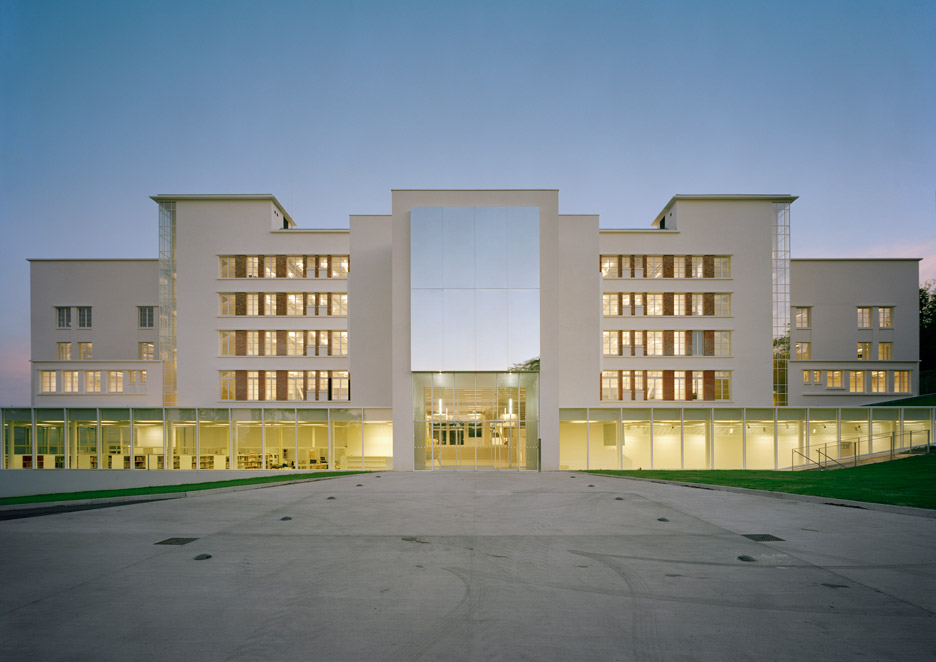 Situated on the border among a residential neighbourhood and a huge spot of parkland, the building was initially a healthcare facility for treating lengthy-term illnesses. Treatments targeted on exposing patients to plenty of sunshine and fresh air. 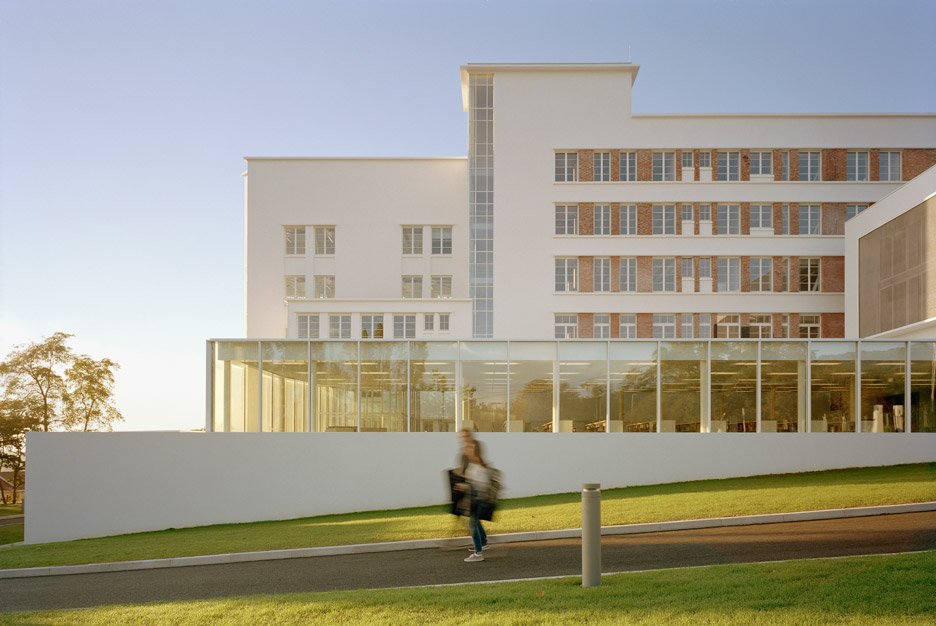 Getting slowly fallen into a state of disrepair, the building was designated for renovation as it was protected by heritage standing. 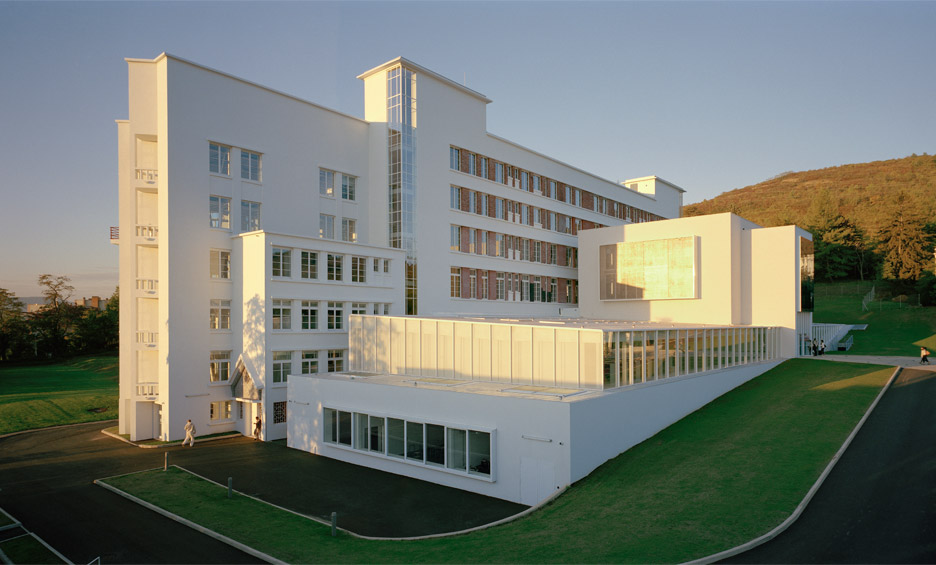 The narrow south-facing developing that previously housed the sanatorium was retained and its inner masonry framework was bolstered with a steel frame to make sure it complies with contemporary seismic rules. 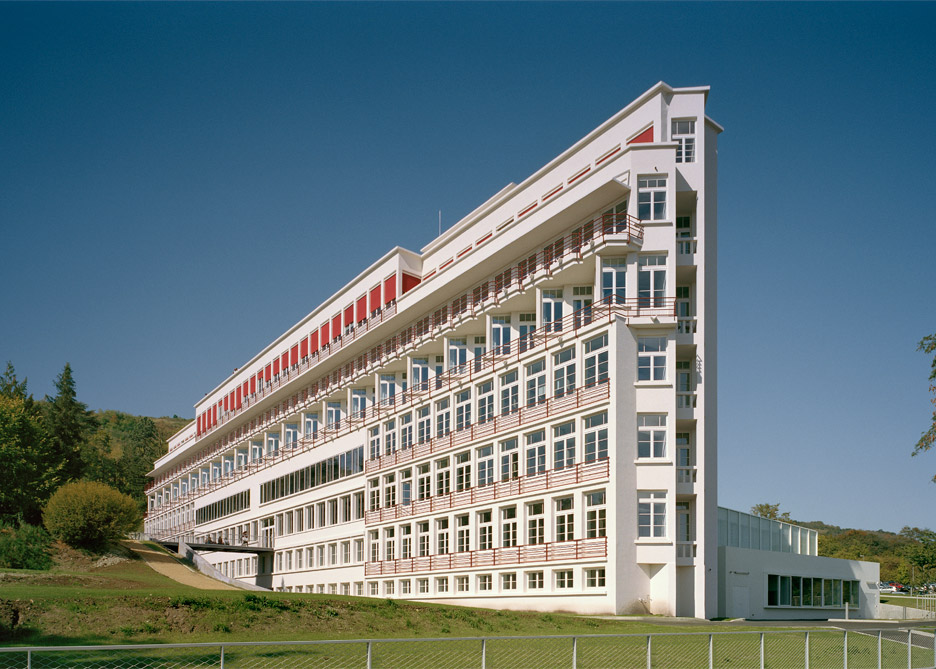 On the building’s north side, the architects added a bulkier extension that contains auditoriums, exhibition spaces, a library and a cafeteria.

The addition continues the easy visual language of the authentic building and aims to retain its connection with the surrounding landscape – each qualities that the architects regarded as a optimistic instance for the students. 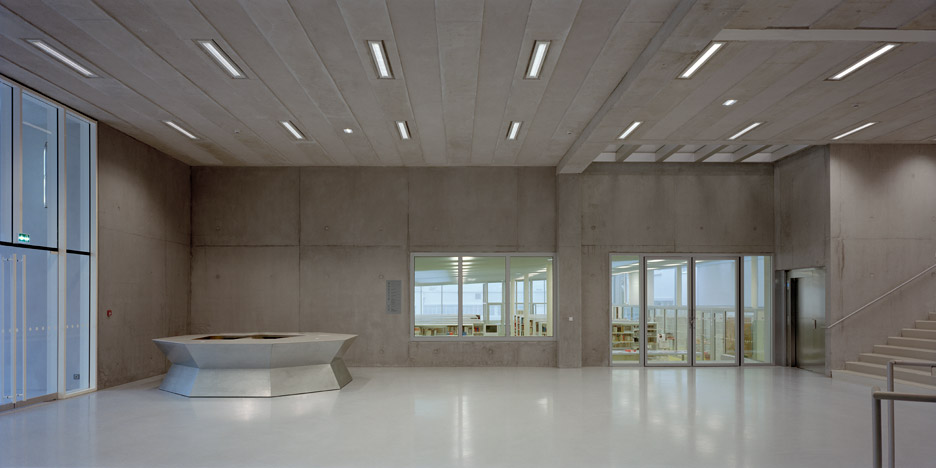 Nonetheless, even though the sanatorium isolated patients and presented optimum publicity to the southern sun, the extension offers lots of options for interaction and controls the volume of light reaching the interior. 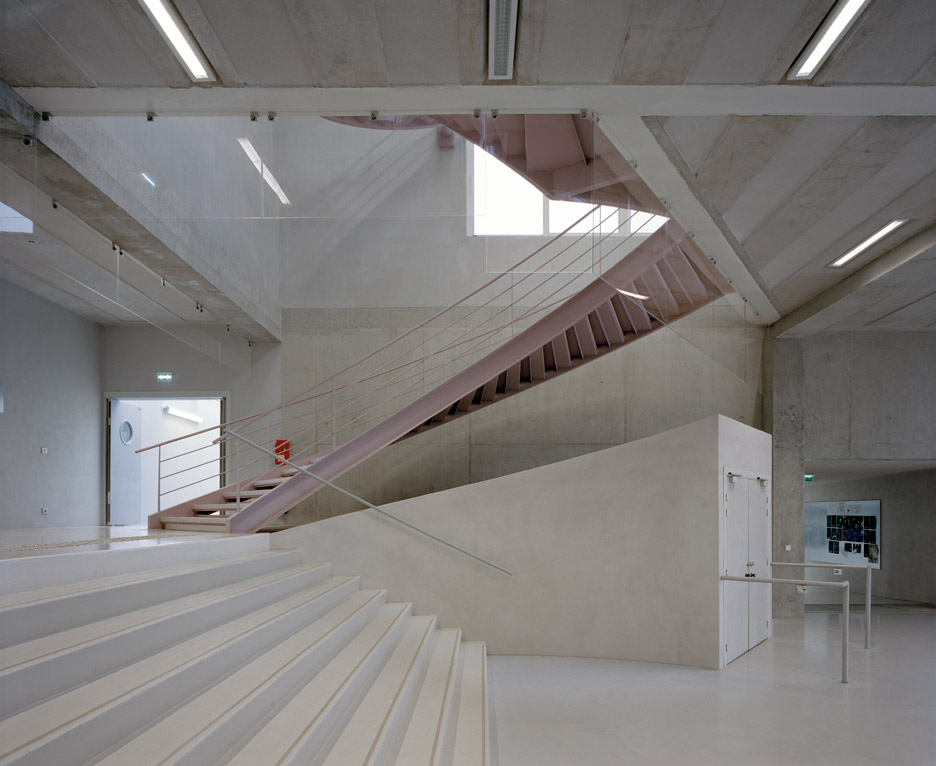 “The sanatorium took benefit of the south orientation and separated the occupants by gender and wealth,” architect Dominique Lyon advised Dezeen. “The new construction hosts younger men and women complete of power who are hypnotised by screens. They need to have to mingle and keep out of the sun.” 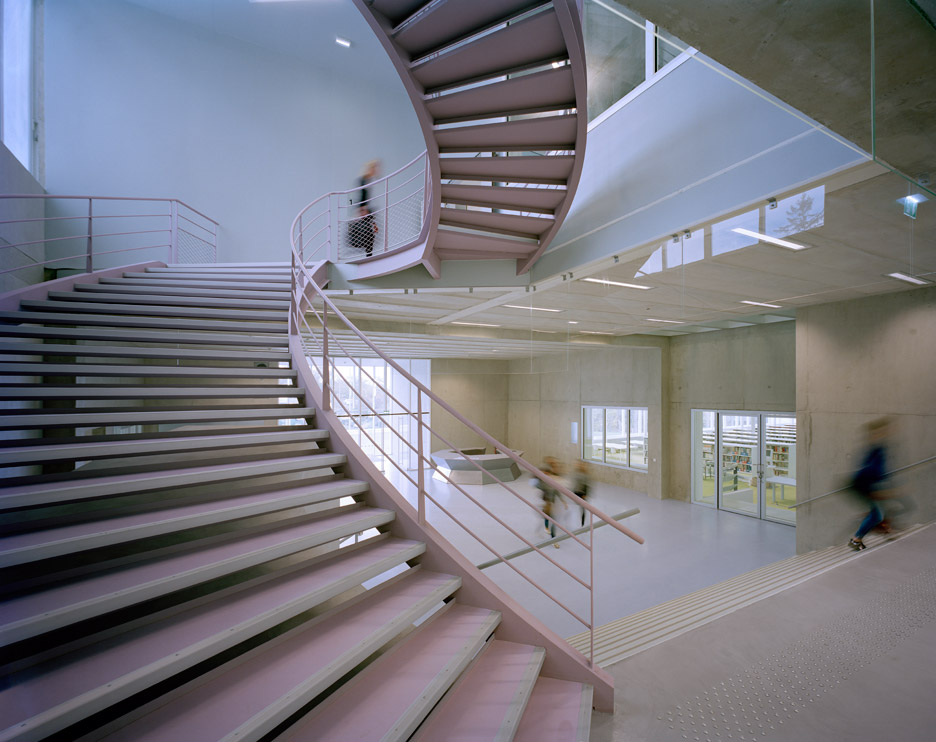 The addition consists of the principal entrance, over which the architects put in large mirrored panels that perform as a heliotrope to amplify light and views.

“Symbolically the sufferers entered from the north to be directed towards the sun, hoping to be cured,” Lyon explained. “Because this constructing has radically transformed its functions, we desired the sun to illuminate the north facade the place the students enter.”

The building’s southern elevation has been adapted so that, rather of rows of patient rooms, it now is made up of circulation places that supply an insulating barrier to safeguard the rest of the interior from overheating.

“The south facade of the college is transformed into a promenade that offers views on the panorama and states the territorial stature of the constructing,” Lyon added. “This a hundred-metre circulation constitutes a buffer zone for the studios that encounter north.” 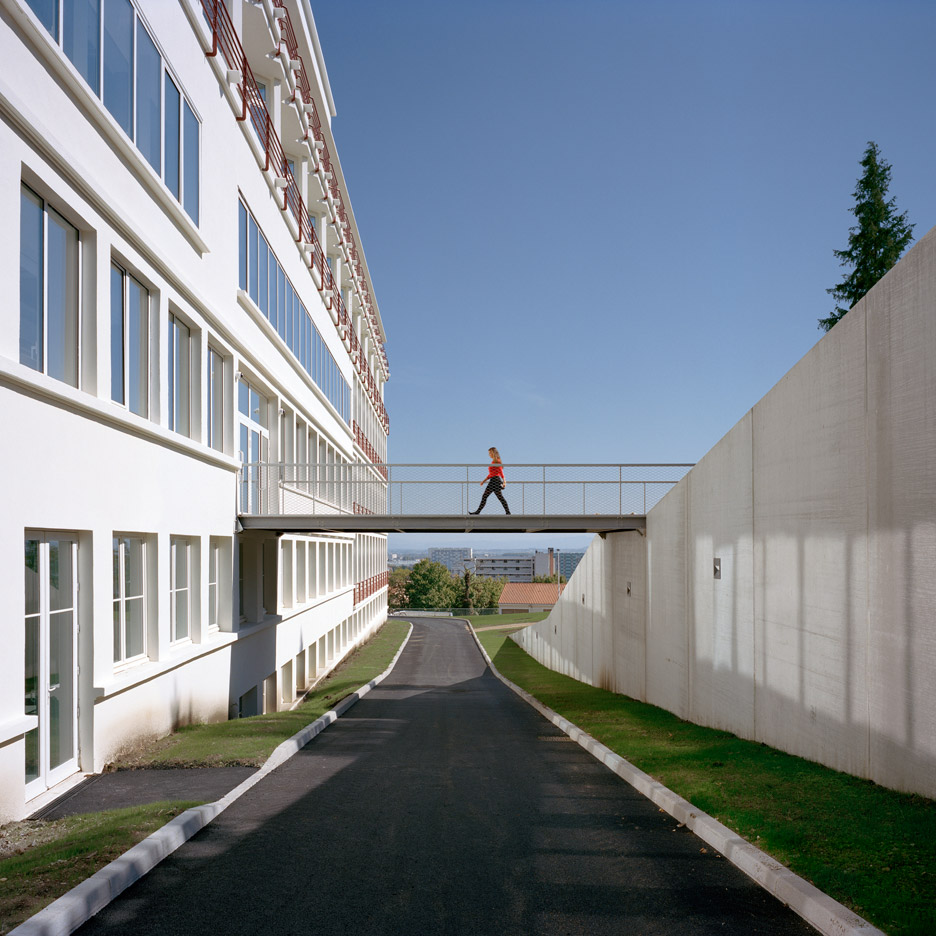 The school’s major social spaces are accommodated on the ground floor, where a massive foyer is flanked by a multipurpose hall on one side and the library on the other. 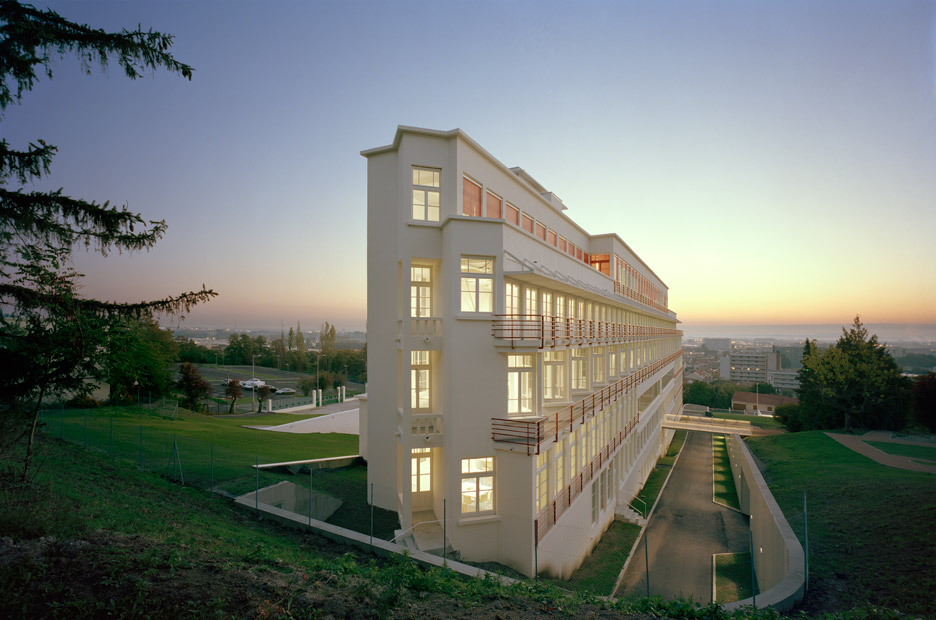 A quick set of methods leads to a landing from which a curving steel staircase ascends to the levels above. 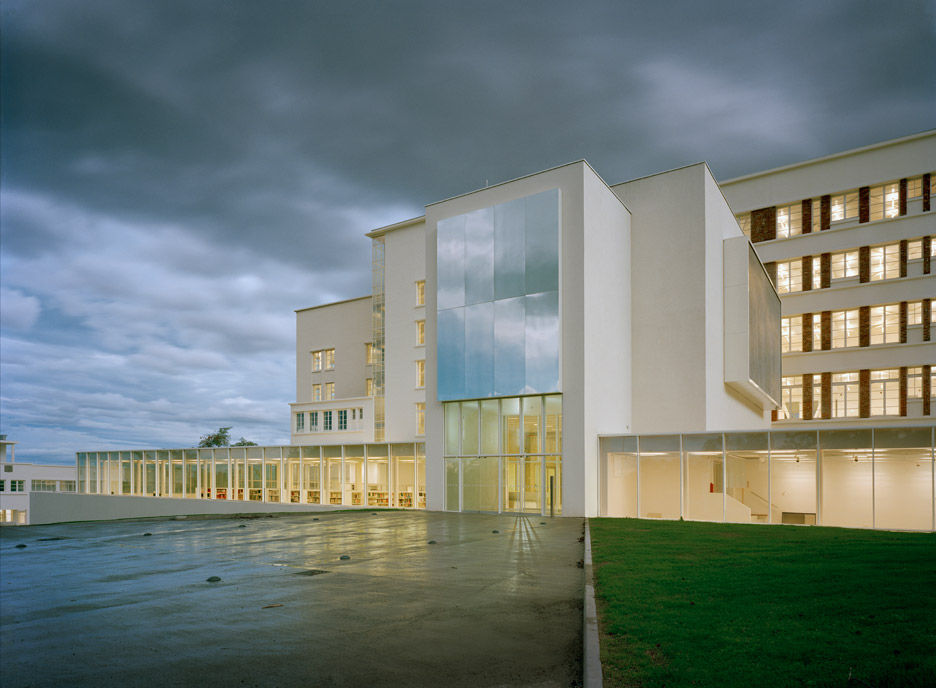 The landing accommodates a cafeteria area positioned in front of glazed doors that open onto a bridge connecting the college developing with the surrounding parkland.

Photography is by Axel Dahl.