Opaque glass cladding on this south London house by Ian McChesney reflects the brick and stucco facades of neighbouring Victorian properties and foliage from a park next door . 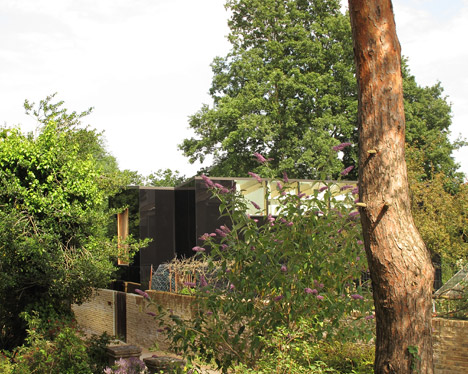 Ian McChesney designed the five-bedroom home, named Tree House, for a plot of land in a conservation area in Sydenham, south-east London. 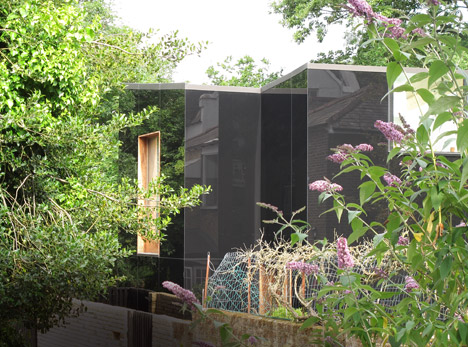 The London-based architect came up against a number of planning restrictions imposed for the site, which is surrounded by a number of late Victorian properties, including a requirement to adhere to sustainable building standards. Over 68 objections were lodged against the development by local residents. 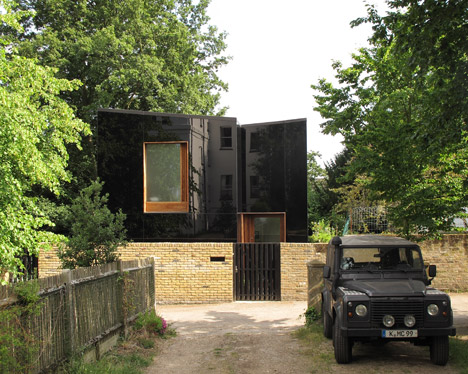 “It was made clear to us by the planners at Lewisham that a ‘striking’ and high-quality design was sought for this site,” McChesney told Dezeen. 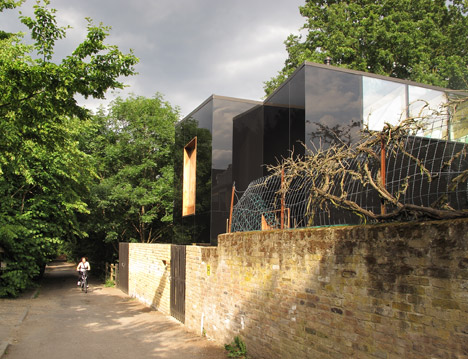 In response, McChesney designed “a simplistic and crisp form” made of two conjoined volumes topped by a butterfly roof that pitches up at the edges and dips in the centre. 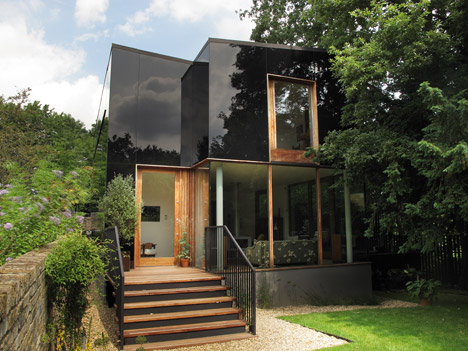 “Given the variety of forms we decided not to mimic the existing massing but to create something obviously new,” he said. 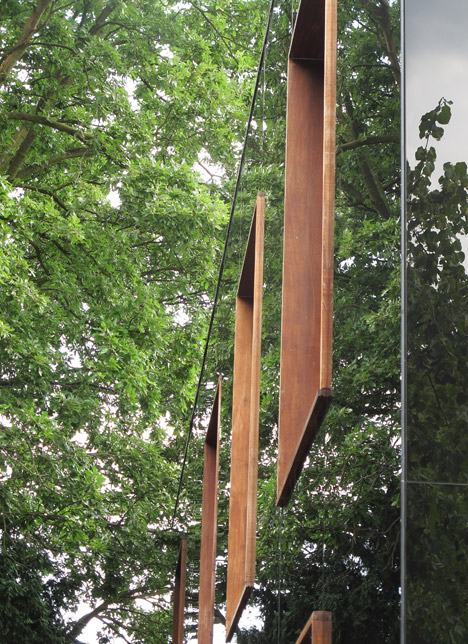 The two timber-framed volumes are clad in sections of black polished glass, favoured by the planning committee for its perceived ability to blend into the surroundings. A layer of insulation between the prefabricated wooden frame and glass facing gives the house warmth. 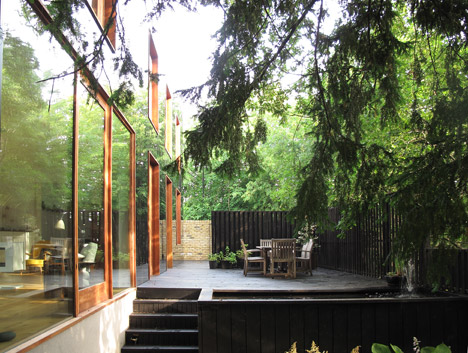 The glossy surface reflects the facades of neighbouring houses and planting, “helping it to sit harmoniously in it’s leafy setting.” 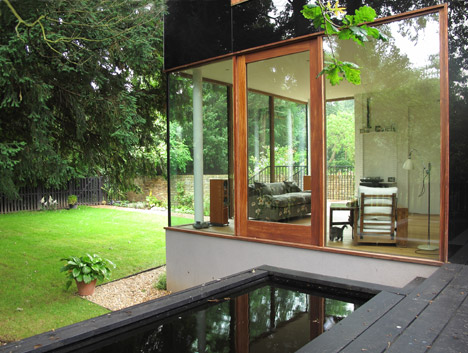 The larger of the two volumes houses the main open-plan living space of the property and a bedroom on the ground floor, while four further bedrooms are located across the upper floor. 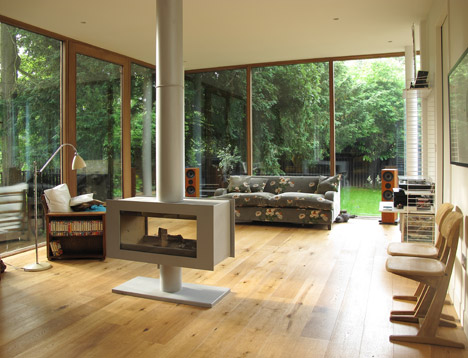 Windows with wooden frames, set neatly into the glass panelling of the lower floor, face onto the gardens. 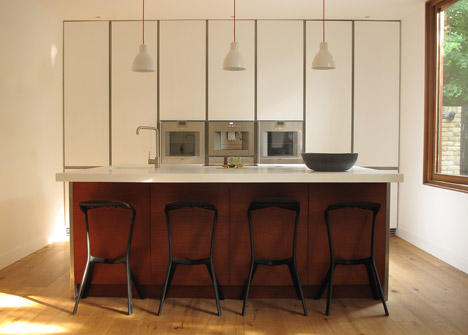 Attached to the side of living space, the second volume forms a slim windowless stairwell that creates a buffer between an adjacent property. 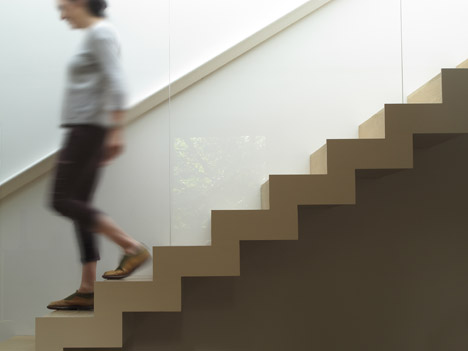 A doorway at either end of the stairwell provides two entrance points to the building, which is positioned between two small tracks. 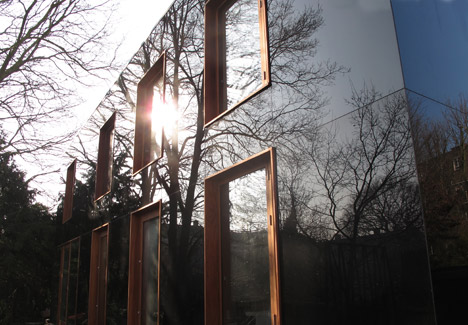 Off the hallway there is open-plan living room and kitchen with light wooden floorboards. The kitchen is centred around an island finished in a contrasting dark-stained wood, while in the living room a wood-burning stove with a flue that rises through the ceiling. 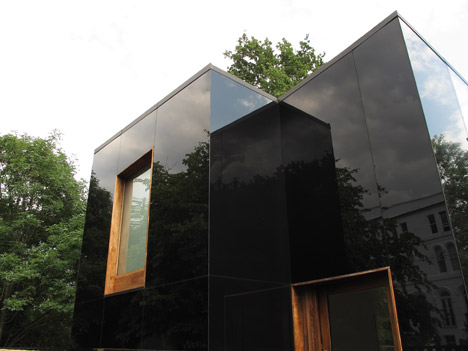 Sections of wood-framed glazing overlook the garden and a set of timber steps lead from glazed doors onto an area of raised decking. 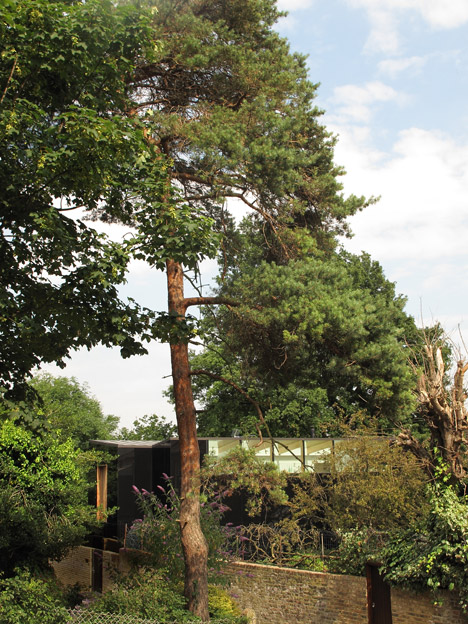 Above the living space there are four further bedrooms, and two bathrooms situated at either end of the stairwell. Panels of high-level glazing in the bedrooms sit flush with the polished glass facade and give views to the park.