The Association for Computer Aided Design in Architecture (ACADIA) used its annual conference to showcase products created with the latest additive manufacturing technologies, including a chair by architect Zaha Hadid that can be 3D-printed on-demand .

Hadid, who was a keynote speaker at the three-day conference, created a sinuous chair using multi-material 3D-printing that can be produced on-demand. 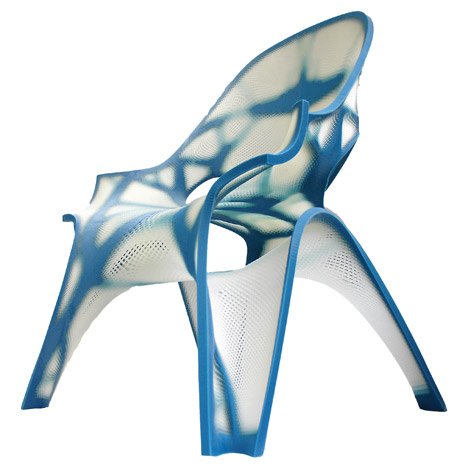 “Zaha Hadid Architects’ starting point was to design a relatively lightweight chair that made use of its geometry, detailing and manufacture to highlight and improve its performance,” said a statement from Stratasys.

Printing in different densities allowed Zaha Hadid Architects to optimise the performance of key structural areas, which are visualised as blue veins across the surface.

The chair was formed on an Objet500 Connex3 3D-printer that is able to print in a variety of colours and opacities. 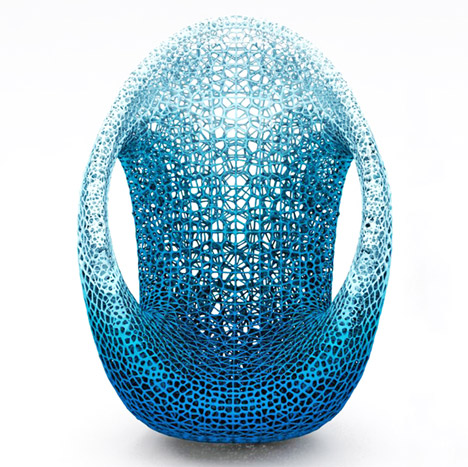 Architect Alvin Huang of LA studio Synthesis Design also created a seat for the exhibition using the multi-material printing technology, that can create objects from combinations of different types of plastic with a variety of textures and properties.

Huang believes access to machines that can print in a variety of materials will bridge the gap between prototyping and mass production with 3D printing.

“3D printing has great potential to revolutionise the design industry,” said Huang. “In the past, the focus has predominantly been on rapid prototyping, but the shift towards rapid manufacturing is imminent.” 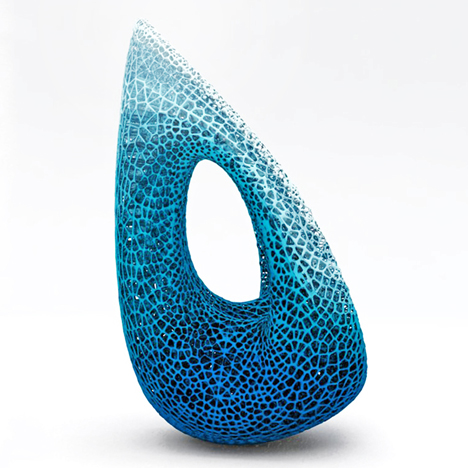 His ovoid Durotaxis Chair is made from a tightly packed mesh and can be used as an upright rocker and a horizontal lounge seat. Elements of the chair are printed in different densities and rigidities to aid comfort.

“In some parts my chair is thicker and more rigid, but thinner and softer where it needs to be; this makes for an optimal relationship between form and performance,” Huang said. “Without multi-material 3D printing, the gradient distribution of material properties and performance would be impossible.” 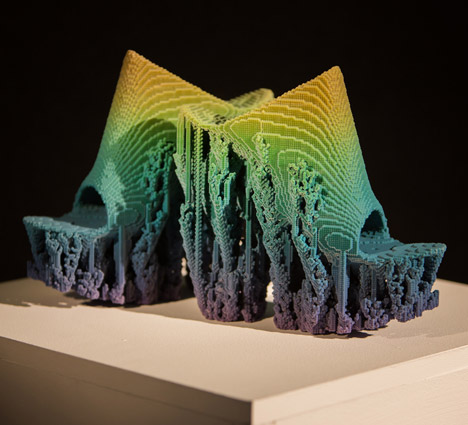 The designer, who created a 3D-printed dress for Dita Von Teese last year, told Dezeen that “technology is going to turn the entire fashion industry inside out” following the launch of the shoes at London’s 3D Printshow last month. 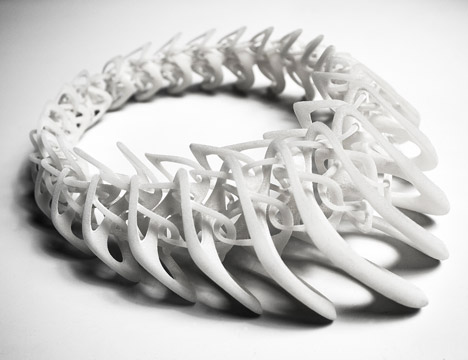 Also for the ACADIA exhibition, which took place from 23 to 25 October, architect Jenny Wu designed a range of necklaces and rings, and developer Jose Sanchez created a game that allows players to combines hundreds of independent units to create intricate pieces for printing. 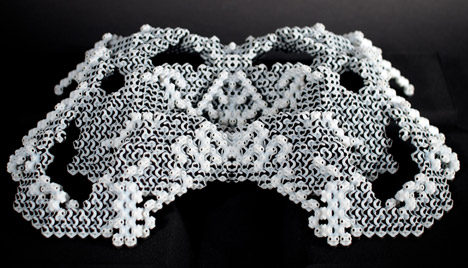 The Polyomino by Jose Sanchez

“We are delighted to host an exclusive curated project from Stratasys this year, as the pieces display a variety of intricacies that set the premise for the future of custom manufacturing and design culture,” said the event’s co-organiser David Jason Gerber, assistant professor of architecture and engineering at Harvard University.

How To Whitewash Wood: ten Straightforward And Awesome DIYs

Beyond Dingbats: The Typographic Legacy Of Hermann Zapf