Zurich architects Dürig created angular concrete frames to indicate the position of staircases and escalators at the Swiss city’s main railway station, which descend from the platforms to a new subterranean station and purchasing precinct . 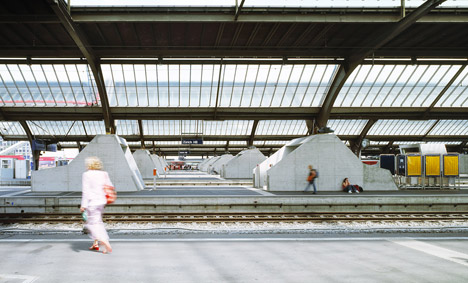 Dürig was commissioned to create the underground Löwenstrasse Transit Station, which aims to improve the knowledge for passengers utilizing the cross-city rail website link at Zurich’s Hauptbahnhof. 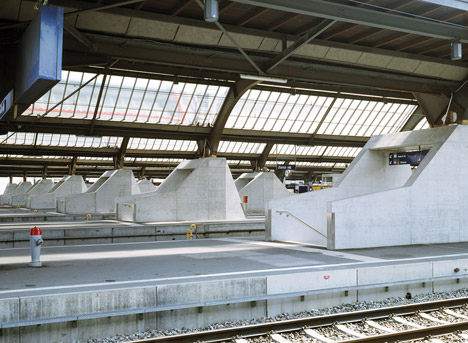 The station comprises two 420-metre-long platforms that will be capable to accommodate longer intercity providers arriving into the four adjacent tracks when all the building function is completed. 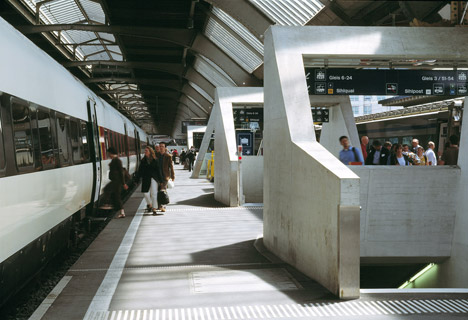 Sandwiched among this level and the present overground station is a new buying centre that extends east and west on either side of the River Sihl, which flows from north to south beneath the main station. 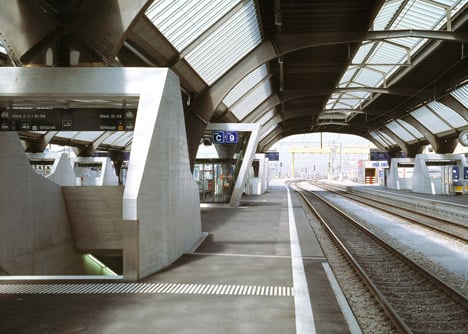 “The 3 functionally differing amounts – the platform level, the purchasing degree and the historical overground station hall – are strictly separated from every other in spatial terms,” explained the architects in a statement about the project. “This differentiation is also expressed in the materialisation, making readily identifiable locations.” 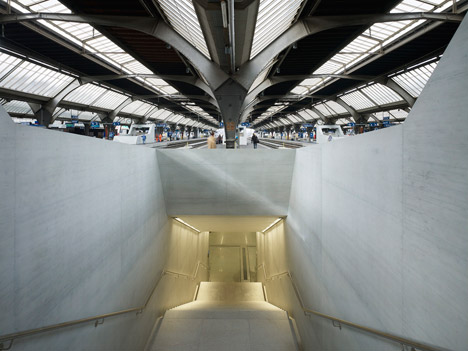 On the overground level, the raised concrete volumes that task from the surface of the platforms direct passengers in direction of the lower floors. 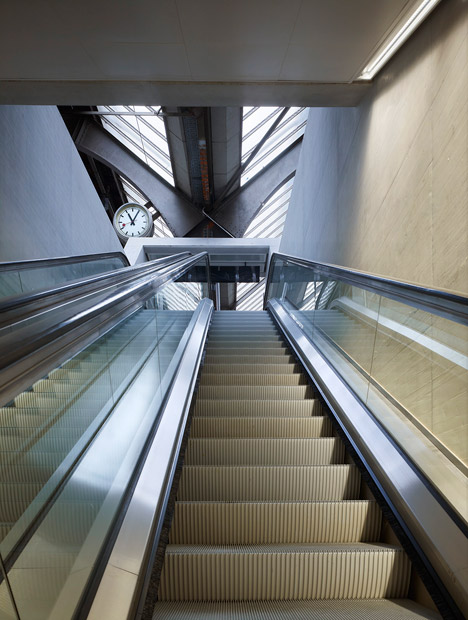 “Vertical means of accessibility such as stairs, escalators and lifts are formed as steady sound-structure conveyance cores running via all the amounts,” the architects said. 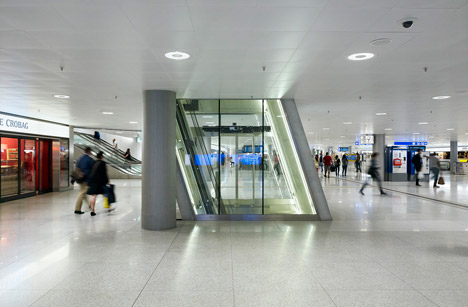 “Their geometry responds to the existing created surroundings, forming individual volumes that, in part, also execute structural functions, for instance acting as bearings for current supports in the listed roof of the railway station,” the architects additional. 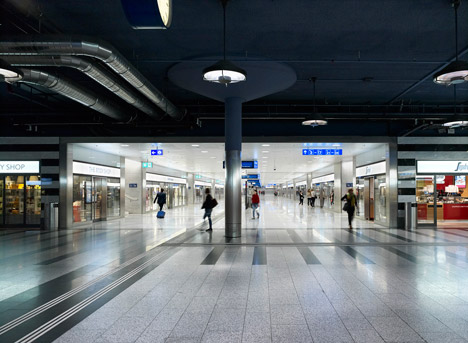 In addition to the sloping entrances to staircases and escalators, simple concrete boxes have lifts that descend through slanted shafts intersecting the buying degree. 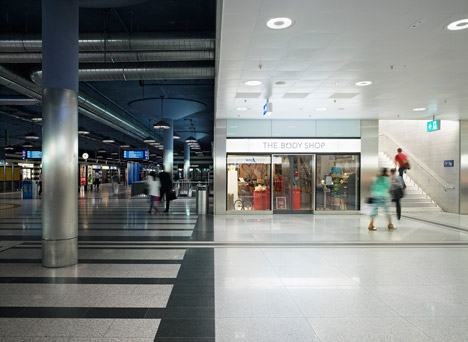 The uncommon angled shafts are required due to the fact the tracks for the new underground station and the terminal over could not be aligned. 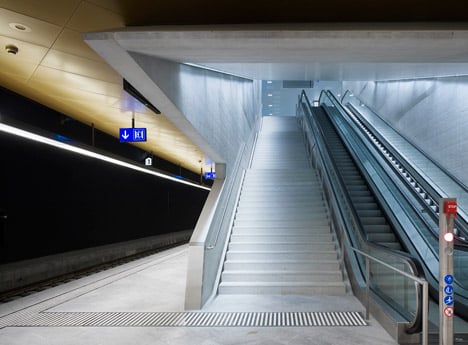 Throughout the underground spaces, large passages facilitate straightforward circulation even when the station is hectic. The open layout of these locations also allows passengers a clear sight of overhead signage. 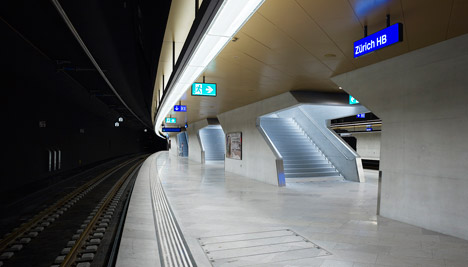 Supplies are used to differentiate the a variety of functions, with the buying spaces distinguished by light and highly polished surfaces that provide a neutral backdrop for the retailers’ branding. 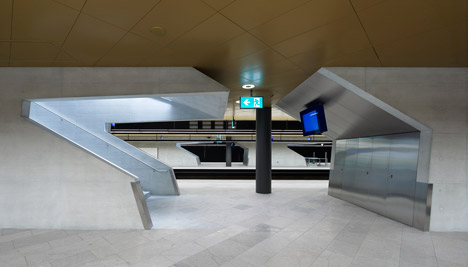 “The architecture is very practical and dispenses with decoration,” explained the architects. “The store window displays, the marketing, the SBB wayfinding technique and the individuals themselves impart ample colour to the spaces. The architecture forms a calm backdrop to the signage, the uses and the advertising.” 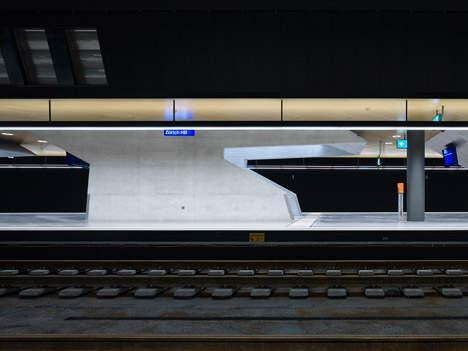 A darker really feel is developed in the underground station, where strip lighting is limited to the edges of the platforms so a contrast is formed with the tunnel walls and tracks. 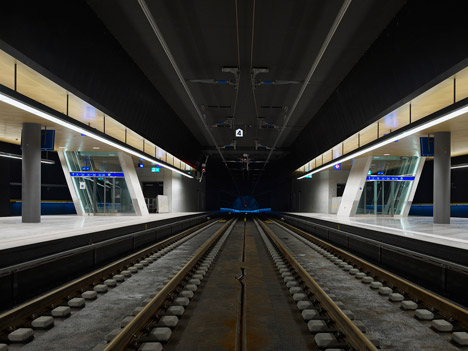 The warm tone of the lighting is supplemented by metallic ceiling panels, whilst a cooler light filtering down by means of the concrete circulation spaces emphasises the transition in between the amounts. 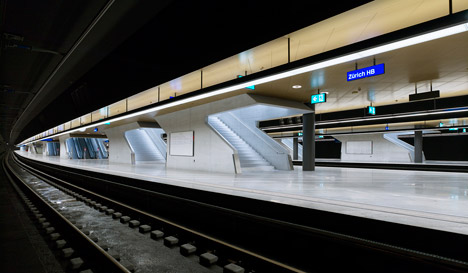 Photography is by Ruedi Walti.