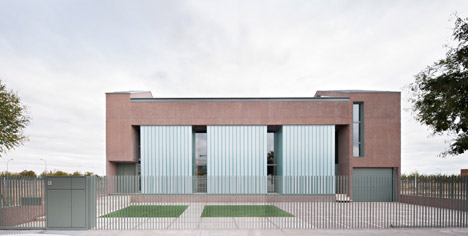 The regional branch of Muka Arquitectura created the Fuensanta House for a solitary plot on outskirts of Ciudad True.

With plans for the adjacent plots uncertain, the architects designed a fortress-like block, featuring ribbed concrete walls topped by a pitched roof, which rests on two chunky abutments that project above the structure. A little doorway is recessed into the brown concrete facade. 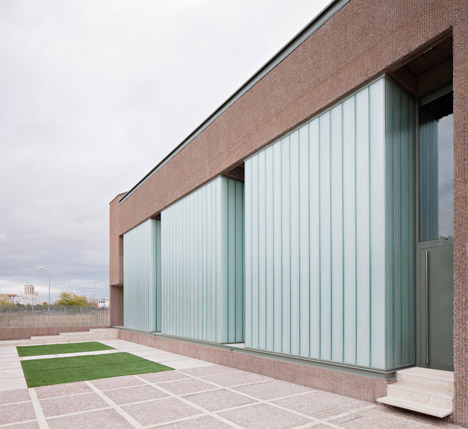 “Due to the uncertainty of the formal volumetry of the adjoining plots, nevertheless unbuilt, and compulsory abutment on both ends for this row-house variety, we decided to raise two volumes of 3.six and 1.8 meters wide respectively at every end of the plot,” explained the architects. 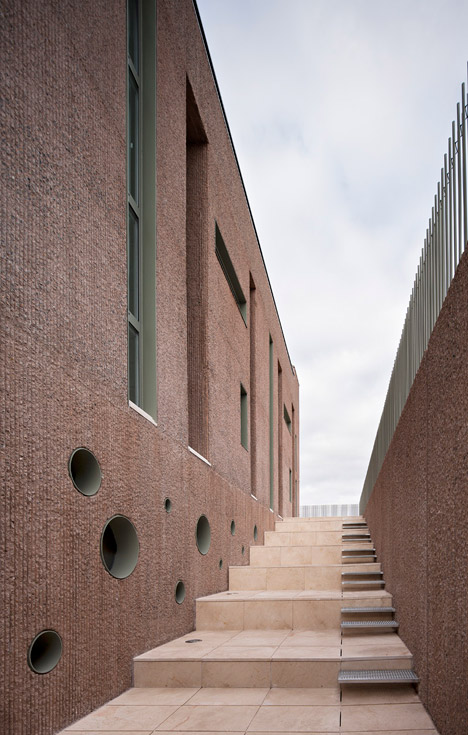 Three delicate glass boxes run the height of the facade, housing a bathroom, bar and staircase. White frosted glass, with a ridged texture that resonates with the concrete, veils the spaces although allowing light to penetrate the program. 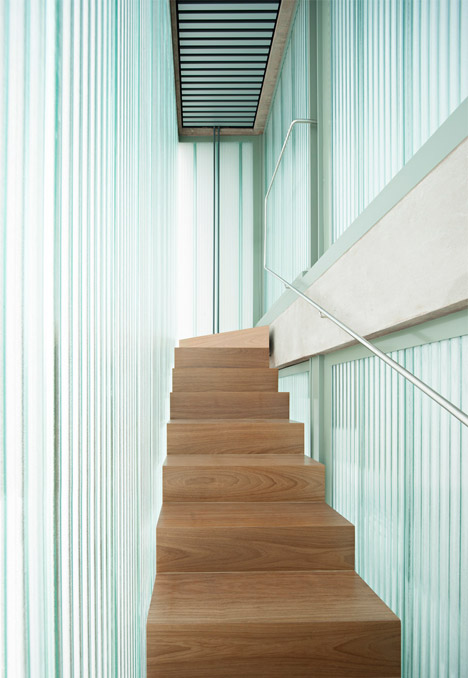 “Any reference to the domestic dimension of the elements is hidden,” mentioned the architects. “There are no surrounding houses, typological references or architectural legacy that could serve at some point as an architectural tool in the design and style of the house.”

“The project will acquire full sense once the rest of the plots around the home will be constructed. Meanwhile, the first piece of the urban puzzle forms the 1st notes of the urban melody in Ciudad Genuine,” they added. A double-height void cuts through the core of the constructing. A narrow galley kitchen and adjoining dining space are set to one side of this space, with a toilet and storage area positioned directly below at basement-level. A reception space, garage and utility area are situated on the other. 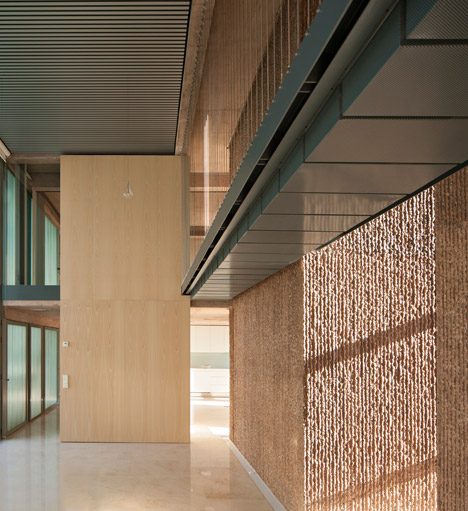 Porthole skylights are punched through the concrete ceiling and wall of the kitchen, casting shafts of the light onto the walls. 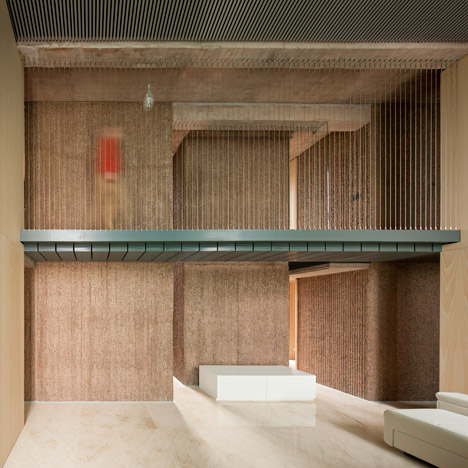 The atrium is crossed by a hanging corridor that connects a master bedroom situated in the larger of the side blocks, with a sauna in the other. 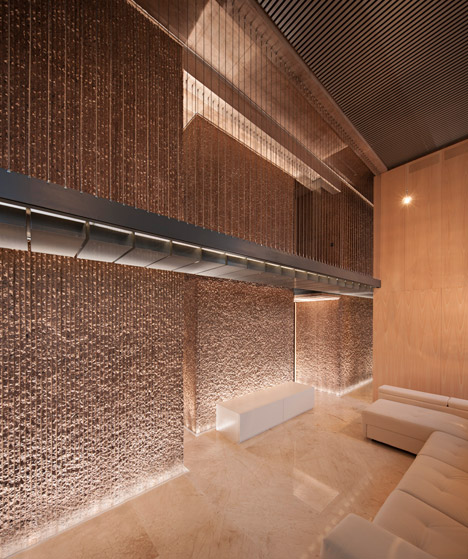 Strips of light shine by means of slits in the steel base plate of the elevated walkway, which is attached to the ceiling by a row of metal cables. Sunlight entering the creating by way of the three glass bays in the facade creates patterns on the textured concrete walls that line the space. “The ocher broken concrete has a magnificent contrast with light and shadows,” mentioned the architects. “The housing delivers a palette of colours and intensities that varies along the day.” 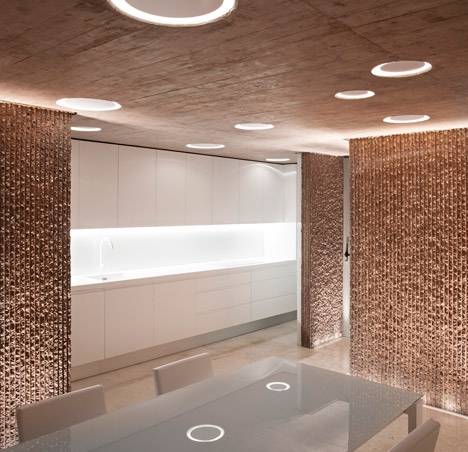 Four concrete cuboids are set behind the walkway, filling the space among the two end blocks. Two contain double-height bedrooms lined with wood panels that have been designed to emphasise the verticality of the space, according to the architects. The other two blocks, which host two-storey spaces with bathrooms at ground level and studies above, are conjoined to the bedrooms. Curved metal rungs ascend the sheer wooden walls in the bedrooms to glass-fronted perches that protrude from each study. 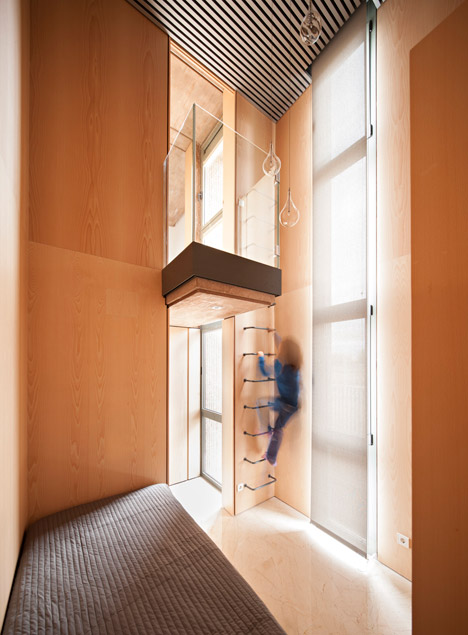 A strip of glazing cuts through the back wall of each bedroom cubicle, supplying light from the building’s rear facade, and trio of teardrop-shaped bulbs also hangs more than each of the spaces. 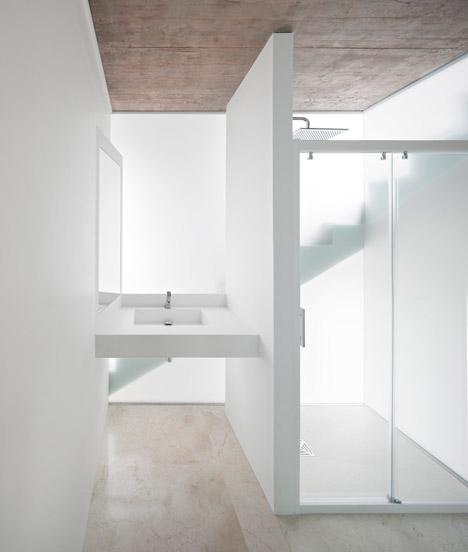 Up-lights run around the exterior of the 4 volumes, highlighting the crevices and chips in the concrete walls. 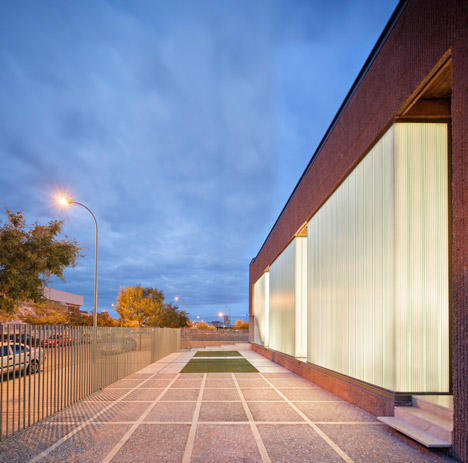 “Artificial lighting highlights a series of cracks in the concrete, as seamless, continuous strips exactly where low-consumption lighting LEDs are positioned,” said the architects.