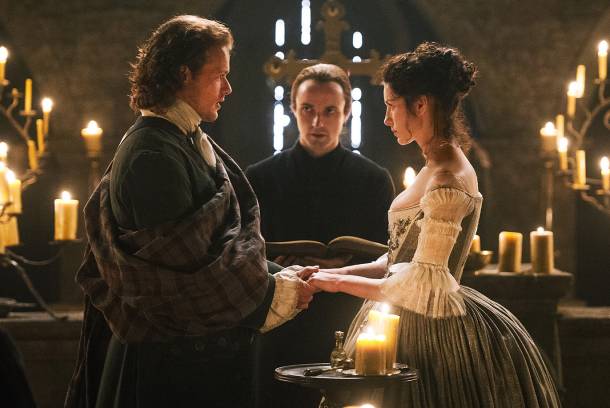 So, in this week’s Outlander, we finally get to the episode all Outlander book fans have been waiting for. The wedding! It’s an arranged marriage, basically forced upon Claire, in order to make her Scottish and protect her from the evil British Army Captain Randall. (Meanwhile, she still has a 20th century husband whom she loves). This is a complicated tale of lost love and new beginnings, the potential for death and dismemberment around every corner and 18th century customs and superstitions meeting 20th century budding feminism. It’s not a simple romance (where we’d have had bodices ripping by the end of the first episode) and things aren’t always as they first appeared. The episode itself is quite simple: Claire and Jamie get married and how that was pulled off, and, what they each did during the day to prepare. Claire drinks – a lot – while Jamie and his cohort see to the details of obtaining the dress, the groom’s family tartan, the ring, the church, the priest and by the end, gawping ear-witnesses to the consummation so that everything is all legal. Certainly, things are turned on their heads as the groom does all the work (and comes to the union a virgin) while the bride is drowning her sorrows trying to forget her troubles.

All that said, a dramatic wedding always has great costume potential and this one did not disappoint. Costume designer Terry Dresbach and her team truly created a showstopping masterpiece for Claire’s dress. Terry’s blog offers a lot of back story, how they made the dress (3000 hours of work!), historical references and more. One of the most notable aspects of the Outlander books is the detail that author Diana Gabaldon gets into. Every physical detail of the characters and their clothes was described. Eagle-eyed readers are looking out for the smallest details and some have been very vocal with their disappointment if even a hair is not the right shade or texture, or that actress Caitroina Balfe’s (Claire) eyes are blue and not the perfect shade of “sherry” colored eyes described so often in the book.

So, for the production team to bring its own creativity to the table, they are potentially pissing off the rabid fan base. It’s kind of like designing for the most picky client in the world (times thousands) who wants everything exactly so and nothing less will do. This is not to dis the fans (I am one, after all) – it’s just that the author created a million monsters with her attention to detail.

Anyway, there’s not much to the set decor. It’s set in a wayside inn somewhere and while there’s some pretty atmosphere, the accommodations are, as they would have been, pretty basic. It’s all about Claire and Jamie getting to know one another, and of course, their costumes. 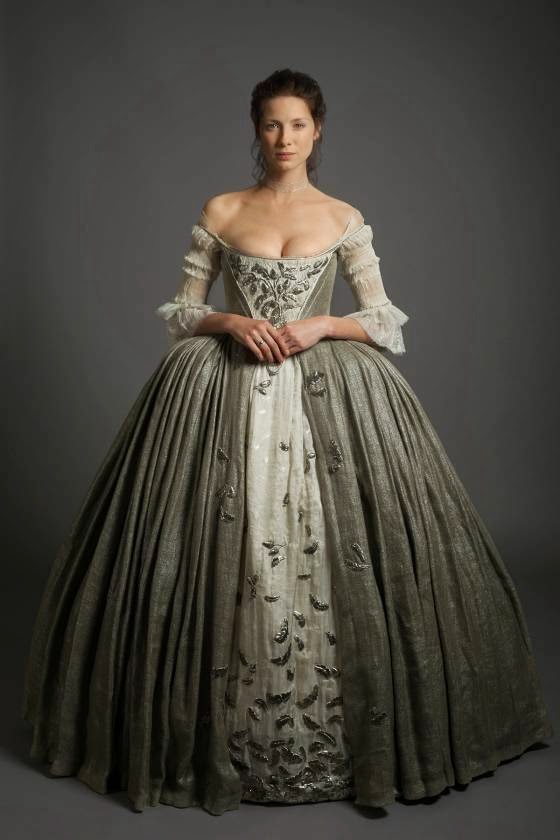 Claire’s gown features silver metal embroidered acorns and leaves falling to the ground. They used real metal strips, not metallic embroidery yard, and painted a patina on them. Again, if costume design is of interest, check out Terry Dresbach’s blog.

The costumes themselves are so detailed and glorious that it’s easy enough to use them as inspirations for beautiful interior details: 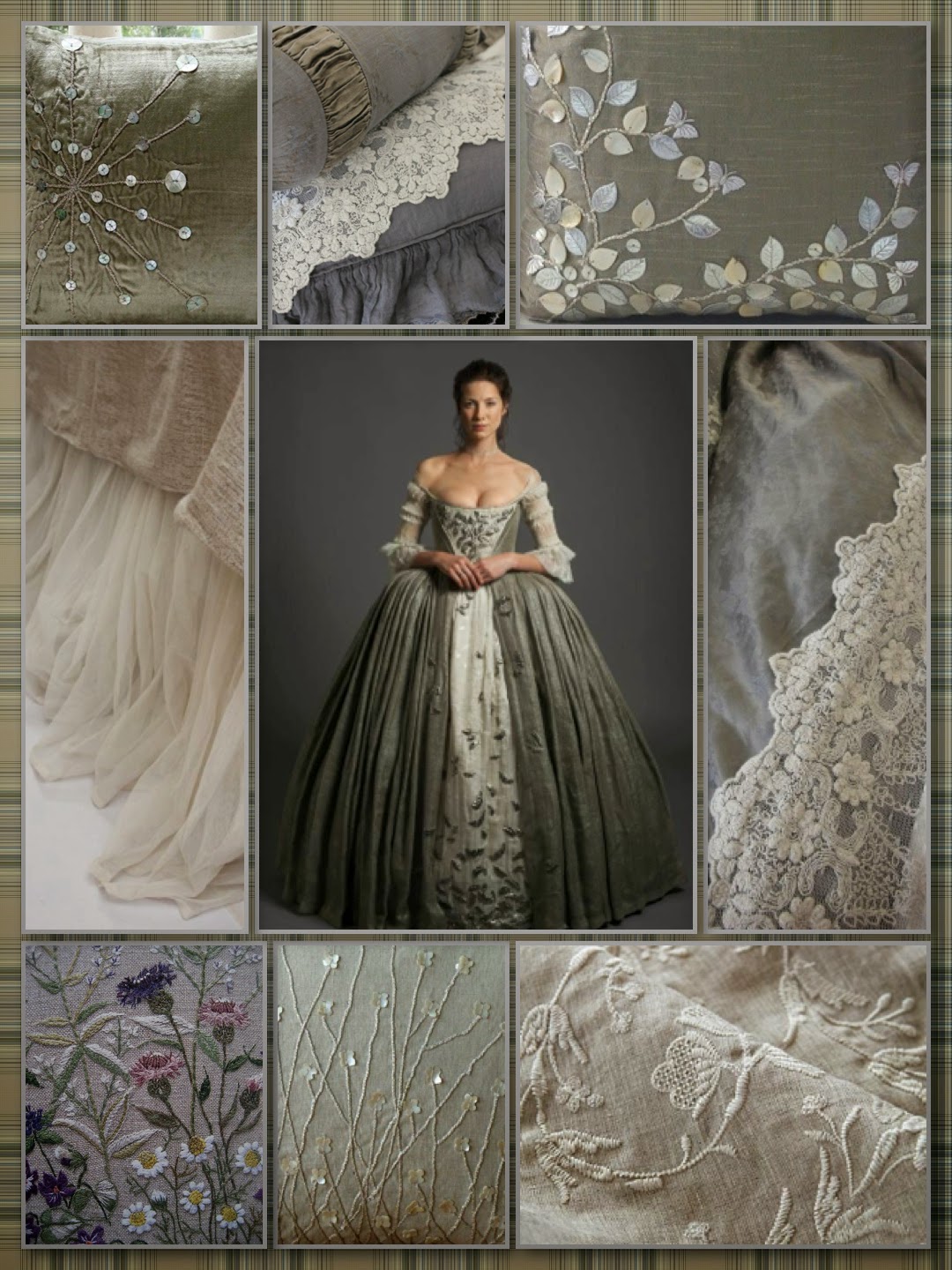 This Anthropologie bedding reminded me of the sleeves on the dress.

This palette with its mix of grays and sheer fabrics, rough woods and a little sparkle captures the essence of the dress. 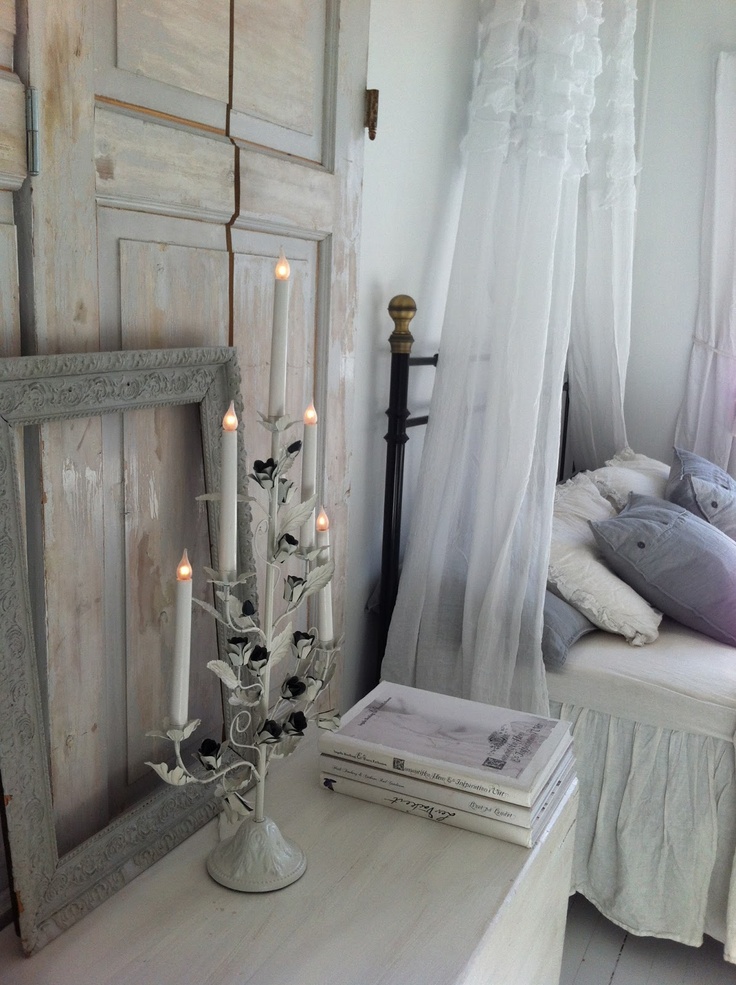 And perhaps a little more sparkle. Note: they used shaved mica to create a sparkle in the dress. Also note, Season 2 of the series will bring us to the Court of Louis XV in France – so we’ll certainly finally have some wonderful interiors as well as costumes! 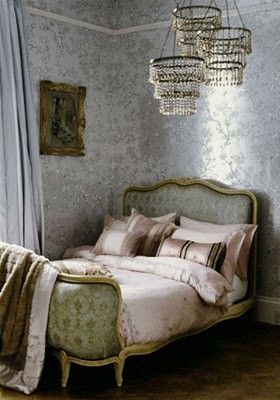 I thought the shirring of the fabric underneath the canopy reminded me of the structure and gathers of the skirt. 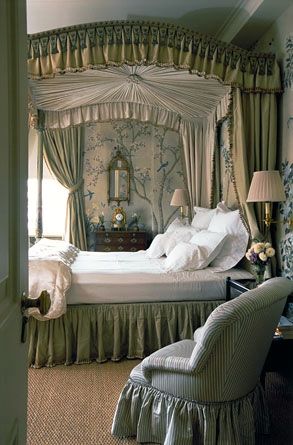 And now, for a few moment’s with our bridegroom, James Alexander Malcolm MacKenzie Fraser. In the book, his borrowed clothes were bright red. For the series, they decided to have Jamie want to wear his own clan tartan, which was created for the show to be related, though not the same, as the muted MacKenzie clan tartan. Up until this point, Jamie has been a “simple” young man (he’s only 23) – an ex-mercenary soldier, a stable hand and a MacKenzie clan relative with a price on his head. Claire doesn’t even know is real last name until the wedding because he’s in hiding from the British. So, it initially seems that Claire is marrying “down” – someone younger, less experienced and not as sophisticated. His education was briefly referenced a few episodes back, but they have intentionally kept his true depths a little hidden. In fact, the character speaks several languages, including Latin and Greek, was educated in Paris, and is surprisingly sophisticated. He’s Claire’s match and his wedding cloths had to symbolize his true status – though he is poor, he is technically Laird of his own estate and had a deep seeded sense of honor and chivalry that would make most women swoon.
And, speaking of swoon-worthy – not so much the stable hand here: 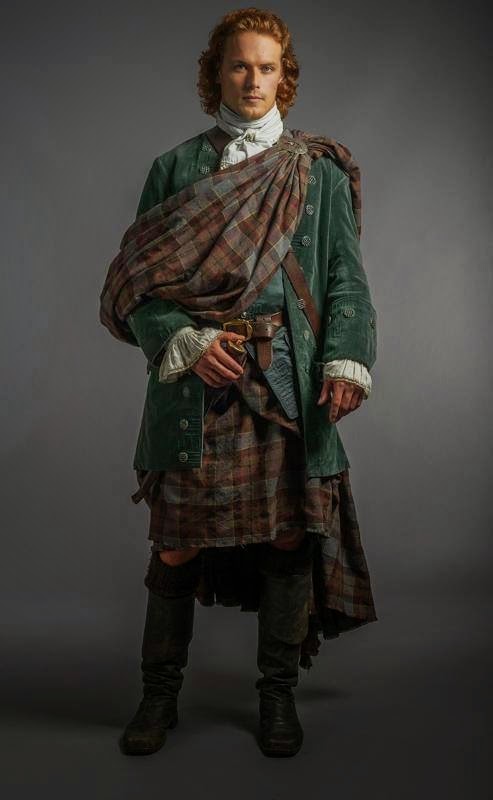 As for inspiring interiors – two names came immediate to mind: Ralph Lauren and my friend and fellow decorator and blogger Scot Meacham Wood: 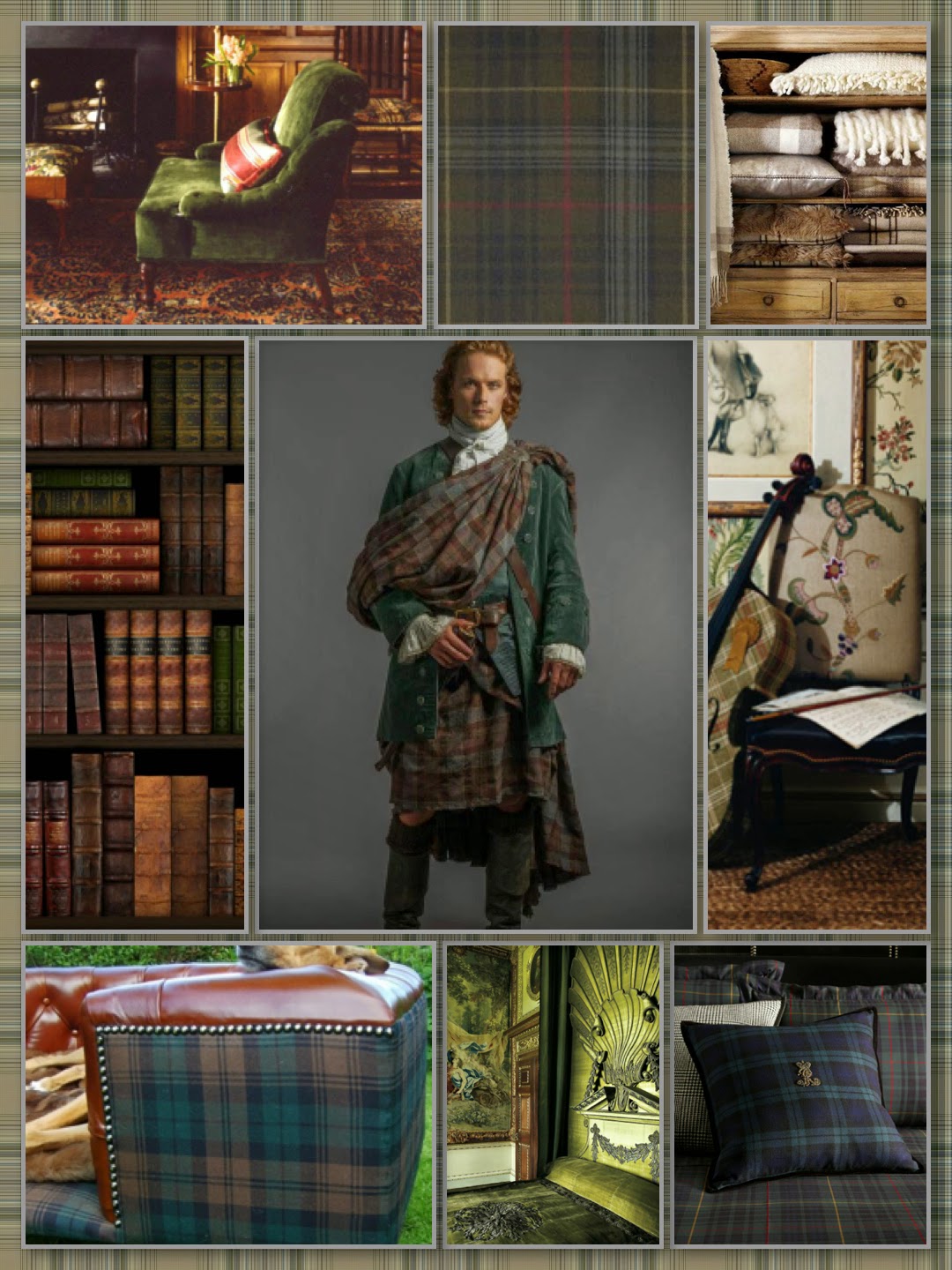 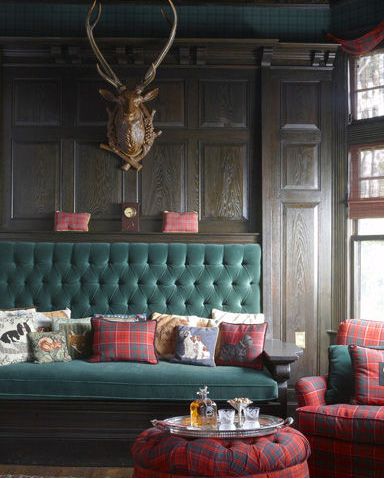 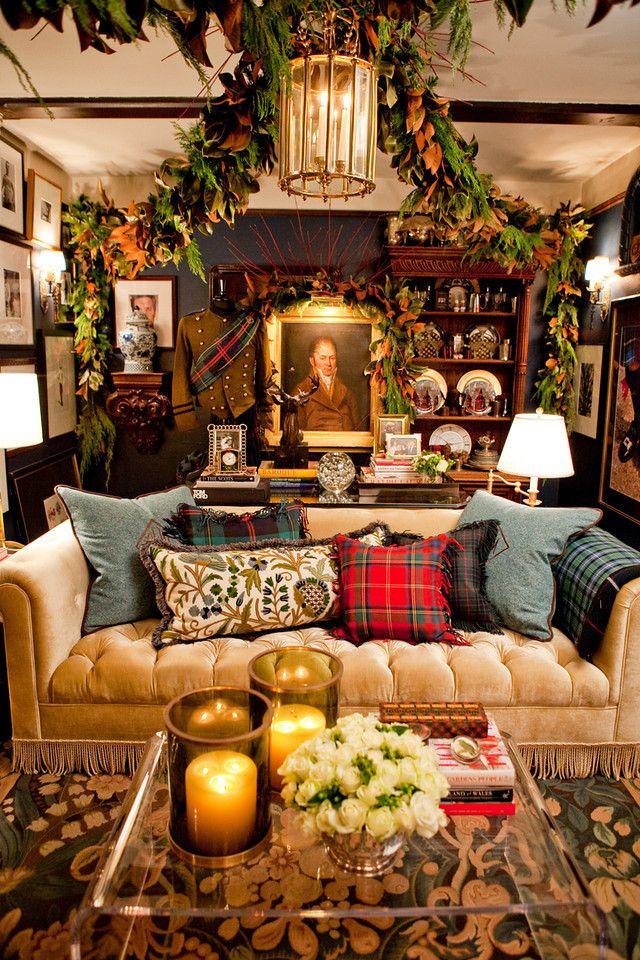 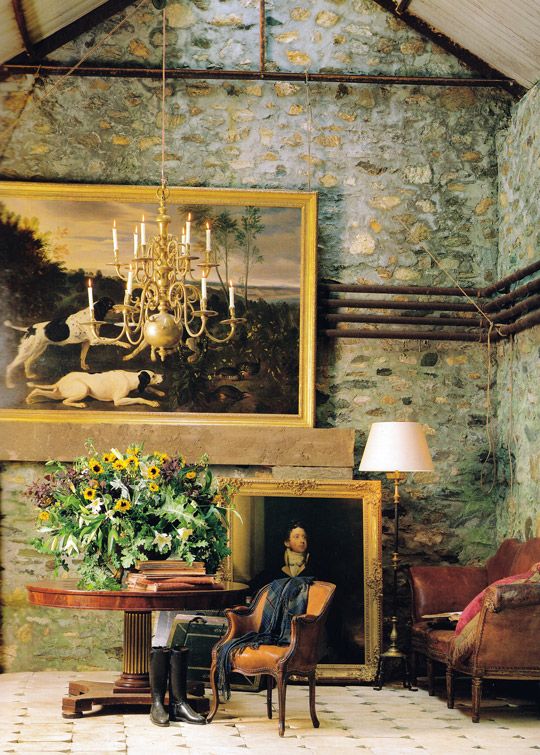 Note: all links and credits to above images here. 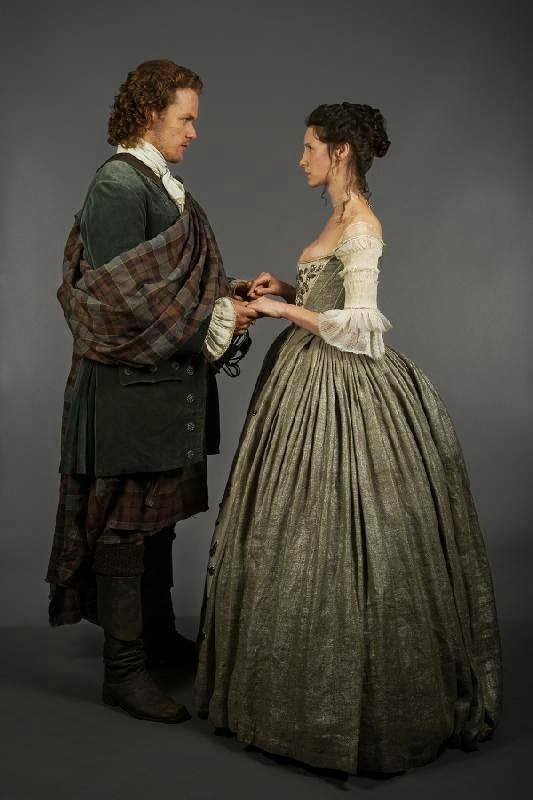 Only one more episode before the mid-season hiatus of the show, to return in January, along with Downton Abbey and Mad Men. There are lots of sad faces out here in tv land!