Powerhouse Company has remodelled the lower floors of a 1980s office block in Rotterdam to create a marble-lined foyer and dining space designed to emulate a hotel lobby . 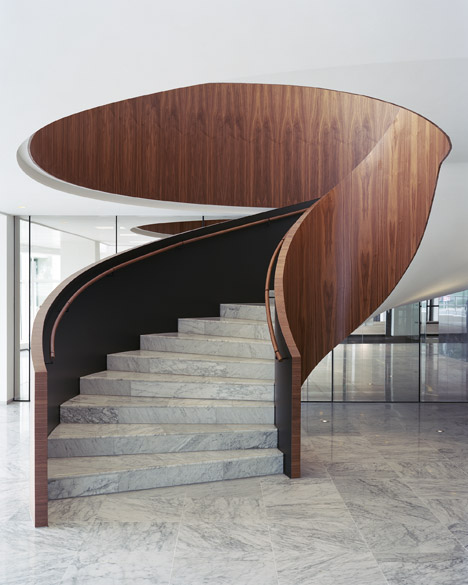 Powerhouse Company added a restaurant and bar overlooking the Nieuwe Maas river and a spiralling wood and marble staircase to the space to create a hotel-like style intended to “attract future tenants” and “encourage chance encounters”. 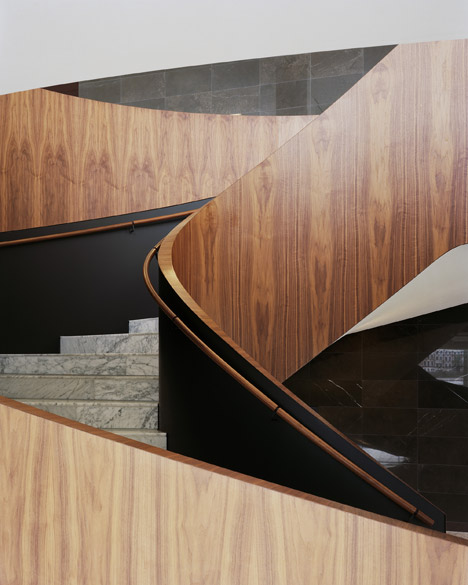 “We wanted the lobby to have a high-end hotel feel, so we included dining and drinking establishments,” said the studio, whose past projects include a Danish holiday home with five charred-timber gables.

Related story: The New Dance and Music Centre in The Hague by RAU Architects & Powerhouse Company

“We wanted people to actively use this space for meeting both formally and informally, not just a reception lobby where people pass through. We hoped also this would encourage chance encounters,” the team told Dezeen. 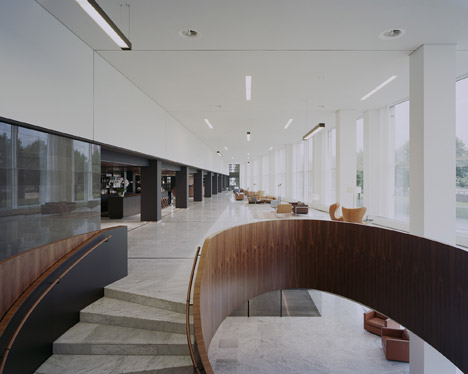 The architects renovated the basement and ground floor of the trapezoid Willemswerf Office Building, by Dutch architect Wim Quist, for the Office as a Hotel project – part of a larger scheme with Danish developer ASR Vastgoed Vermogensbeheer that will see all 24 floors of the 1988 building refurbished. 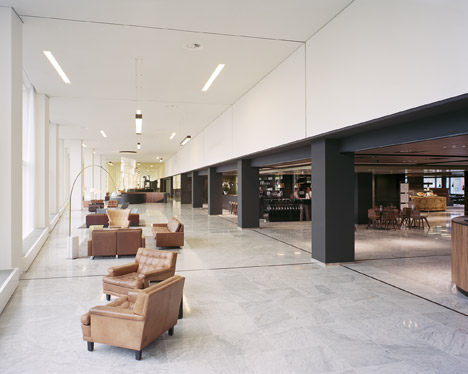 Powerhouse’s approach was for a “sensitive and respectful” restoration of the interior spaces, keeping to the strict grid layout of the original building, and introducing a limited palette of materials that emulate a “high-end hotel environment.” 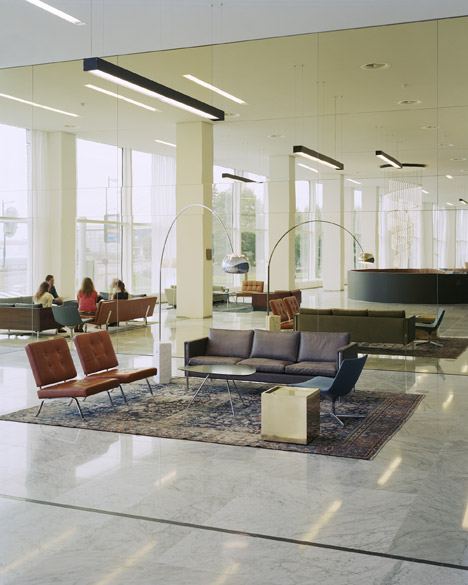 The building was originally designed as the headquarters for a Dutch shipping company, but later leased out to multiple tenants with the lobby left unclaimed by any one company.

This set-up informed the architect’s decision to move an existing first floor restaurant to the ground level, freeing up the upper floor as a rentable space. 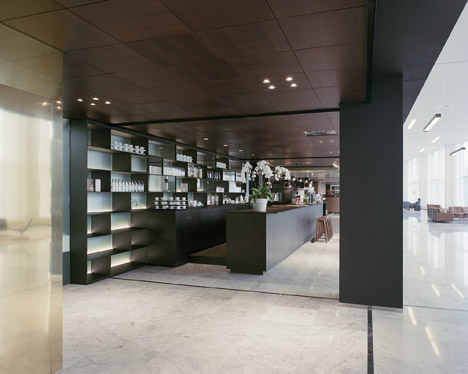 The architects clad the interior space in marble tiles and added a helix-shaped staircase with a dark-wood balustrade to connect the ground floor lobby with the basement level.

A spiral pendant light, designed by Powerhouse co-founder Nanne de Ru, hangs over the stairwell and reflects light in a mirrored wall beyond the well. 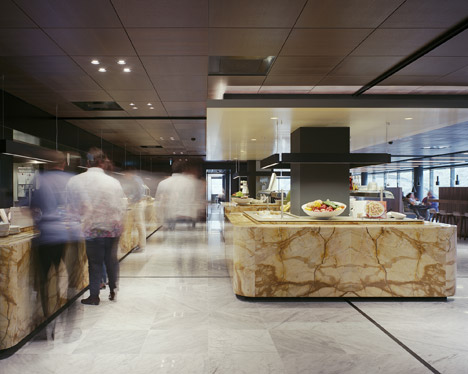 Clusters of Modernist furniture arranged on rugs on the marble floor create an informal area for the building’s tenants to receive clients and visitors.

“Worn-out rugs from Morocco and standing lamps give intimacy to each of the seating areas by marking out imaginary walls and rooms,” said the studio. 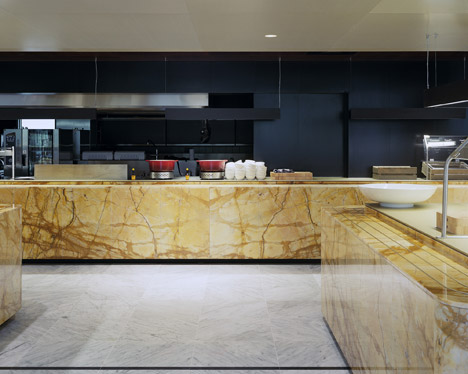 The seating area occupies a wedge of floor-space between the glazed facade and a coffee-bar and restaurant to the rear of the building. 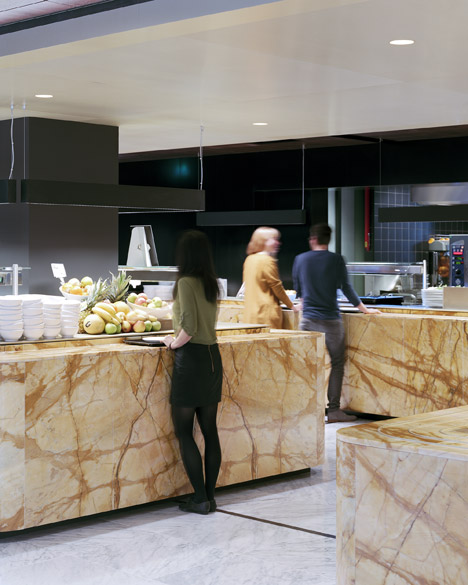 Under a lowered ceiling, a coffee bar lined in dark wood faces the seating area.

Behind, the restaurant has brown marble counters and four leather-upholstered seating booths. 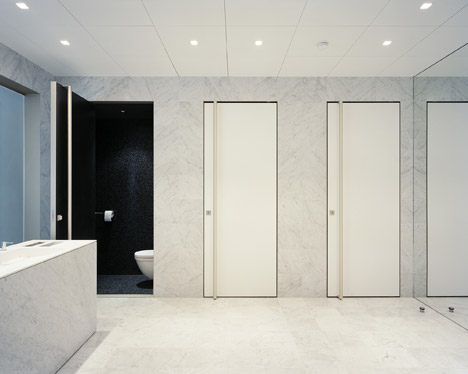 The toilets, housed in a block to the rear of the restaurant, are clad in the same pale grey marble as the lobby.

The interior walls of the cubicles are mosaicked in glossy black tiles that contrast the brightly lit bathroom. 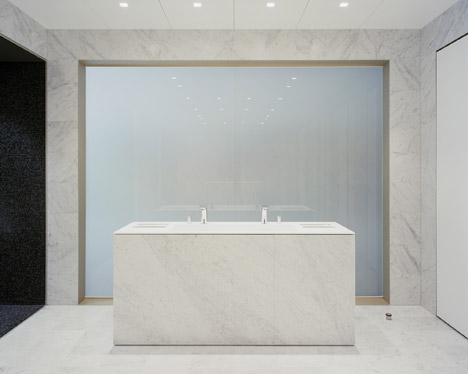 Powerhouse has been commissioned to renovate the remaining 22 floors of the 24-storey building over the next eight years. The firm is also currently working on a 100-metre-tall Turkish broadcast and observation tower in collaboration with IND architects. Photography is by Kim Zwarts.