Described by the architect as being “a bit like a treehouse for adults”, this wooden residence in rural Sweden boasts a triangular profile that permits the sloping facade to become a climbing wall . 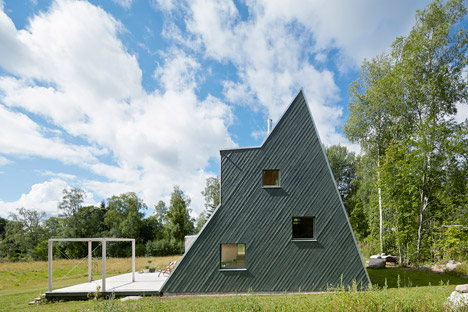 Architect Leo Qvarsebo created the summer time retreat for himself and his kids. Positioned between a patch of woodland and a green pasture in Dalarna, the Qvarsebo Summerhouse was developed to make the most of its picturesque setting.

Associated story: Summer season property on stilts by Mats Fahlander nestles into the landscape of a Swedish fjord 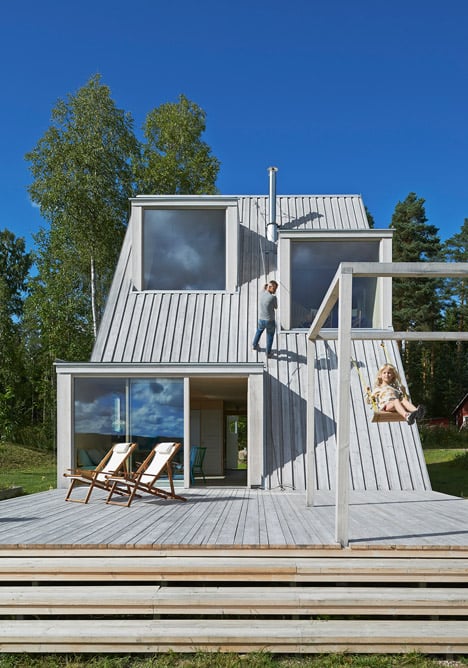 Large image windows frame views above the landscape, whilst the front of the constructing opens out to a generous terrace featuring sufficient area for sun loungers and a frame for two swings. 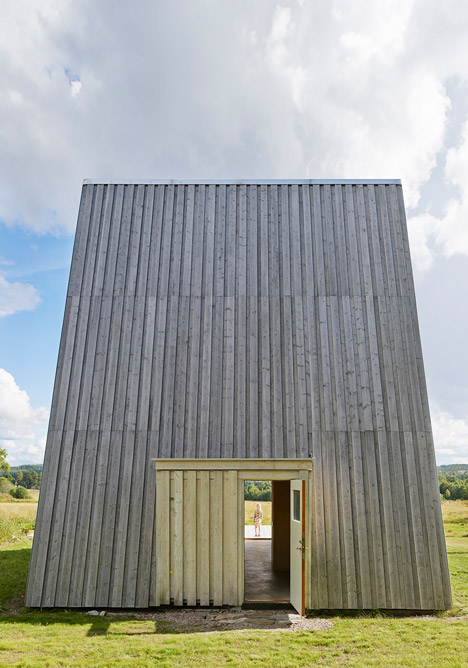 There is even a rope connected to the peak of the roof so that residents can climb up the slope of the facade. 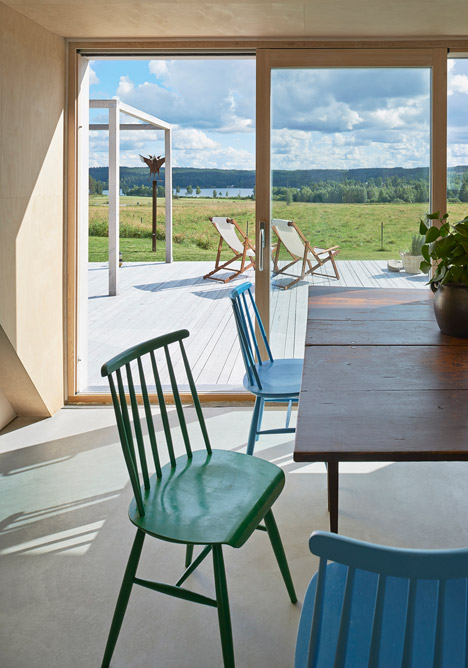 The triangular profile creates a hierarchy of spaces inside the split-level structure. At the bottom is a spacious living area and kitchen, although rooms on the upper levels become more and more compact and intimate. 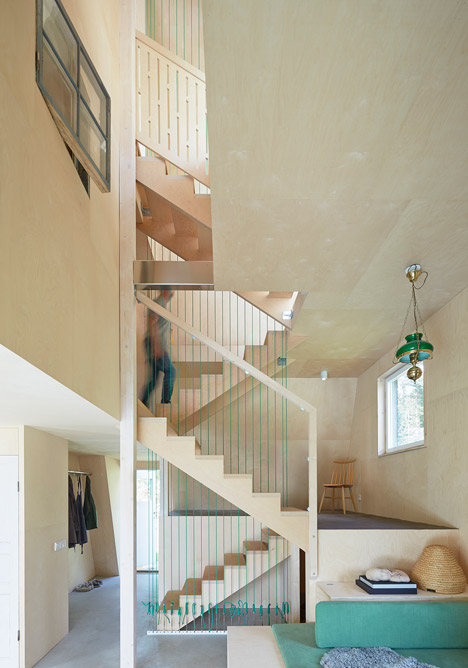 “Exploiting the see is clear but architecture must deal with much more than that and let its inhabitants be capable to interact with their atmosphere,” explained Qvarsebo. 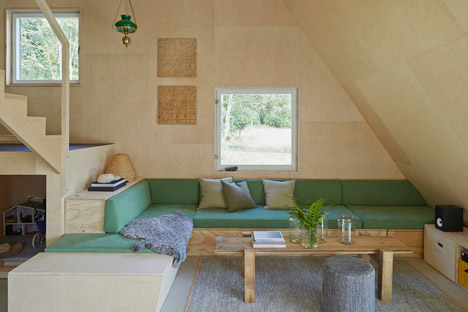 “The home is a bit like a treehouse for grownups,” he continued. “The climb to the best is by way of many levels and gives each views and privacy. From every degree of the residence you can see up to the next, generating a curiosity to continue to climb and when you happen to be up, the view is breathtaking.” 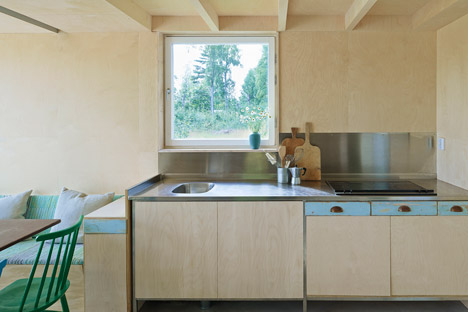 The very first of three huge south-facing windows is situated in front of the kitchen, generating a dining area that can open out to the terrace. A second and third can be identified on the two uppermost levels, creating dormer windows that task out from the sloping facade. 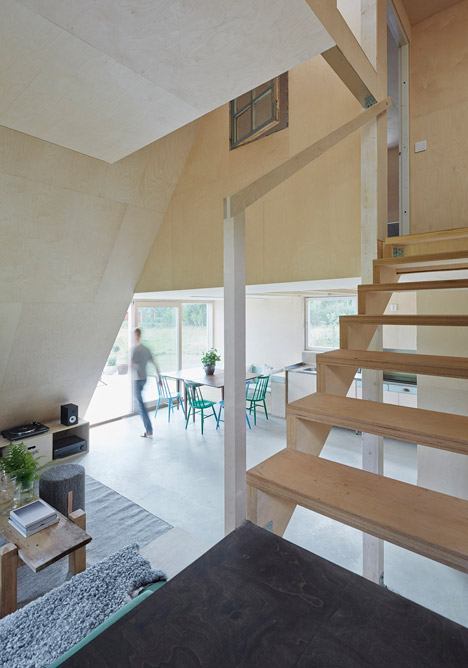 According to Qvarsebo, these bay windows accommodate the three requirements of the self-initiated brief, which he lists as “cooking outside and indoors, a quiet reading area and a bedroom beneath the stars”. 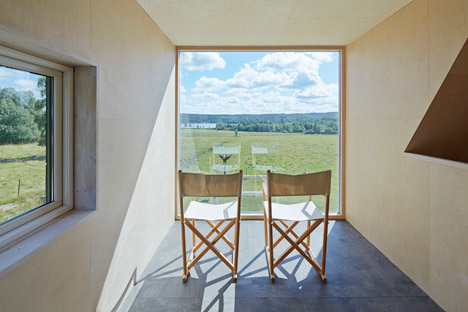 Walls and ceilings throughout the interior are lined with birch plywood, which the architect sourced from a closed-down puzzle factory. This material also extends across the staircases and numerous pieces of constructed-in furniture, while doors and windows are all second-hand. 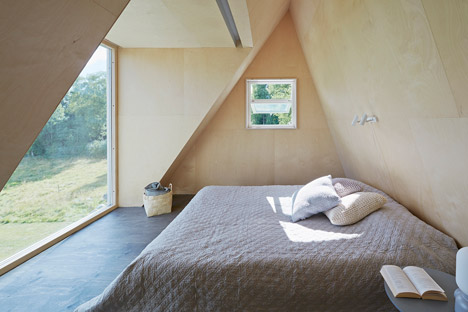 A storage region is slotted into unused ceiling area above the ground floor, even though the two children’s rooms are located up one more half-flight of stairs. Qvarsebo’s bedroom is located at the best of the creating, accessed through a study on the mezzanine floor below. 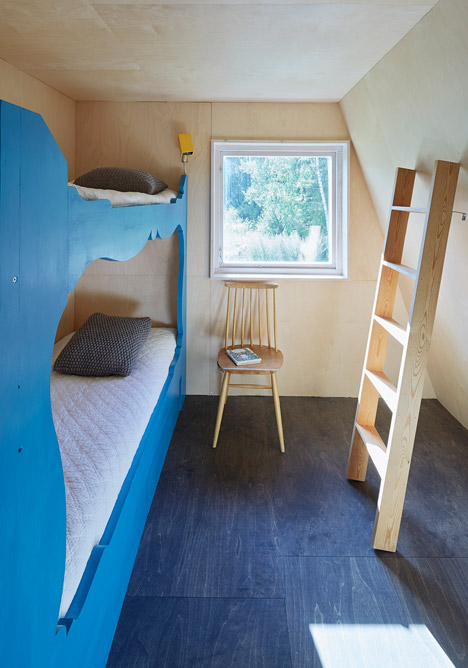 The constructing has an totally wooden frame and the facade is clad with pine panels. 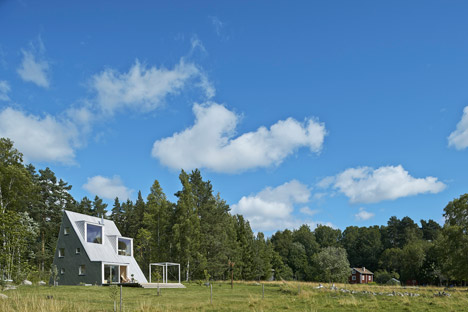