The sheltered entrance to this craggy school canteen building in France is fronted with a “forest” of slender white columns . 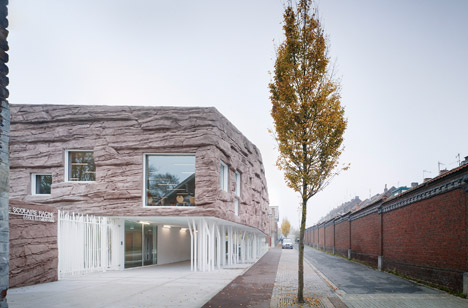 Located in Tourcoing, northern France, the stone-like framework was developed by neighborhood studio D’Houndt+Bajart to generate dining amenities for a neighbouring school and kindergarten. 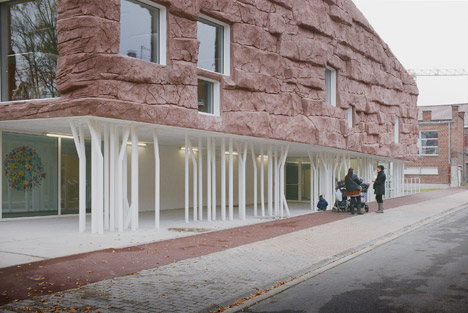 Not like the school buildings on both side, which are both developed from red brick, the new structure was conceived as a hybrid of a cave and a treehouse – so its principal volume is lifted up to first-floor degree.

Its surface comprises a series of striations that provide a rocky texture and an uneven profile – prompting the building’s name, The Roc. 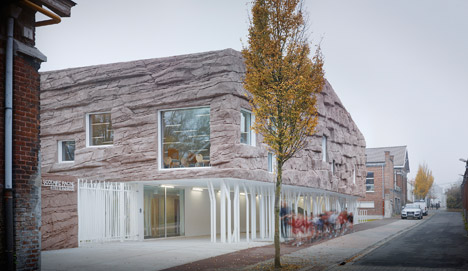 “The primary volume’s result of the developing is spectacular – a rock suspended over the void, each strong and aerial,” explained architect Vincent D’Houndt, who established his studio with Bertrand Bajart in 2006.

“The rocky element contrasts with the whiteness of the ground-floor walls, the jambs of the woodwork and the ground, reinforcing the floating impression of the rock.” 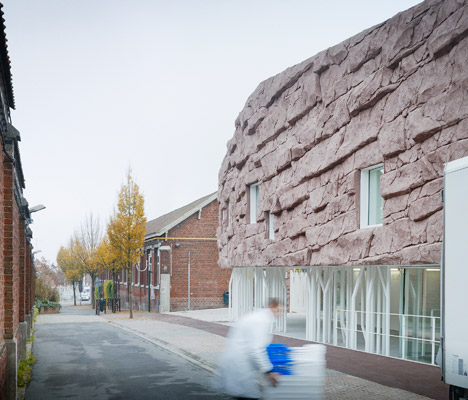 Drawing on a vast variety of references that vary from the Grand Canyon to Jules Vernes’ science fiction novel Journey to the Center of the Earth, the staff chose shotcrete to accomplish the desired aesthetic. 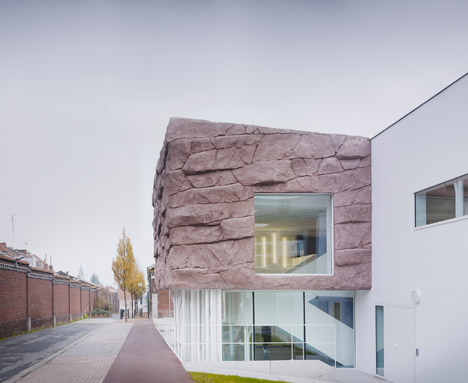 This materials – a kind of concrete that is projected onto a surface by means of a pressurised hose – was moulded and hand-carved by a craftsman. It has a slightly pinkish tone, offering a subtle match for the brickwork. 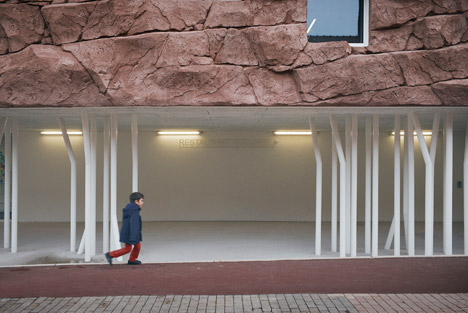 “The facade reproduces perfectly the rock with its cracks, edges and rounding due to the erosion, geotectonic, and deformation of the strata,” said D’Houndt. 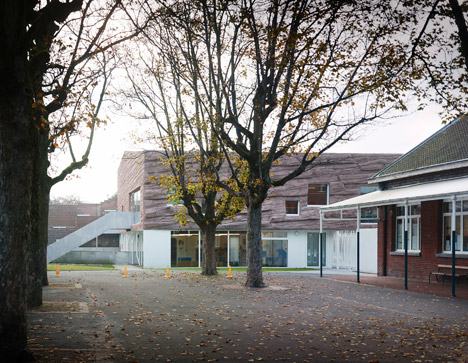 Beneath this volume, the building’s ground floor is slightly recessed to develop a sheltered entrance area. The overhanging 1st floor is supported by a row of slender white columns that angle out like tree branches, reinforcing the treehouse analogy.

“This is the edge of a forest exactly where mother and father can shelter waiting for their youngsters to go out of school,” D’Houndt said. 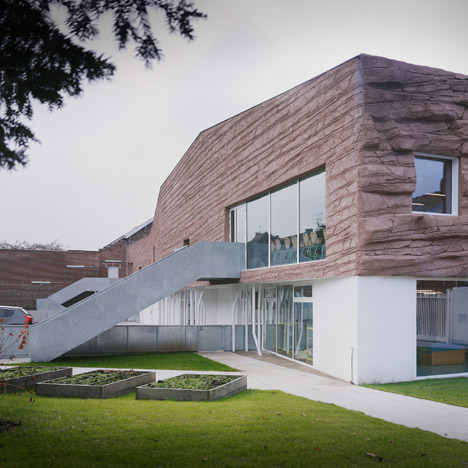 The principal dining area is located on the first floor. It has various entrances, allowing different routes in for nursery college college students, elementary school pupils and other site visitors. 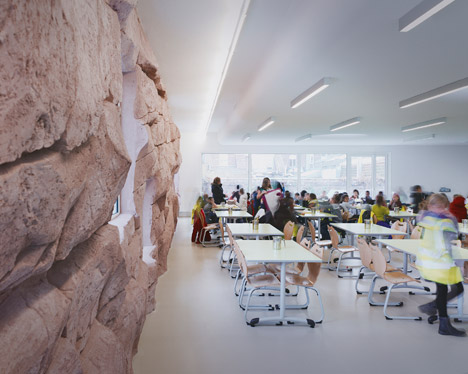 For the kindergarteners, a corridor prospects directly although to the hall, meaning they do not have do go outside. School pupils use a staircase that leads straight up from the playground, plus there is also a route straight from the entrance lobby. 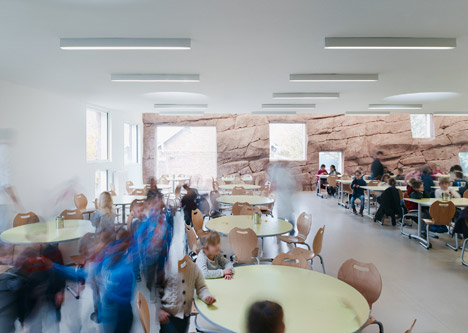 Some wall surfaces within the space are coated with plaster and painted white, even though other people match the exterior. A series of square windows enable a lot of daylight into the space. 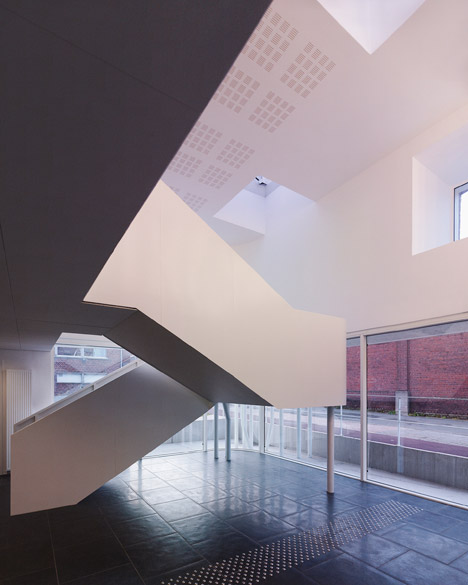 “To obtain fluency, the junctions in between the different surfaces are gummed: no joints, foot barriers, or links, which are elements into which the thoughts bumps,” said D’Houndt.

“The constant surfaces, the smooth transitions, and the lack of angles, aim to create much more freedom. No limits to the imagination.” 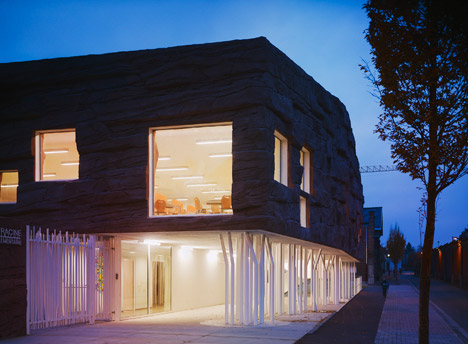 Kitchen and bathroom services are also positioned on this floor, whilst the ground floor accommodates a series of flexible spaces for education and other pursuits.

Photography is by Julien Lanoo. 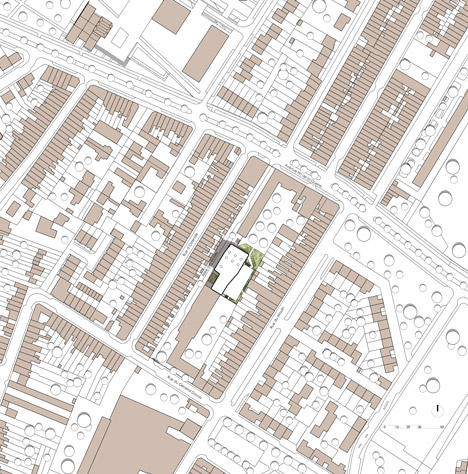 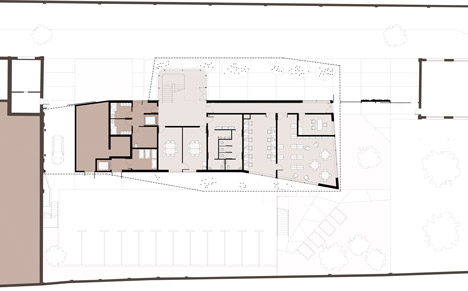 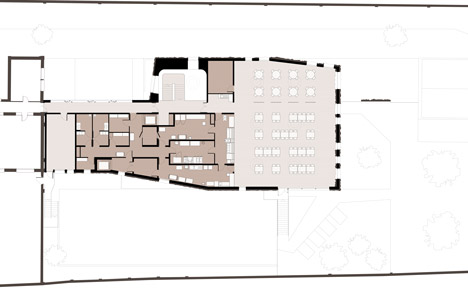