Pietri Architects has driven a deep pink ravine by means of the heart of this apartment complicated in southern France, generating a protected rooftop garden for residents . 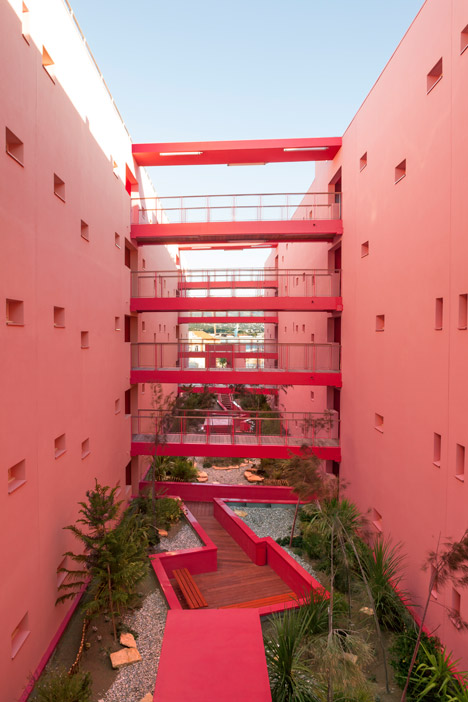 The blocks rise from a strong single-storey base containing a automobile park and business premises. The narrow slice of greenery sits above, affording sea views between the towers. 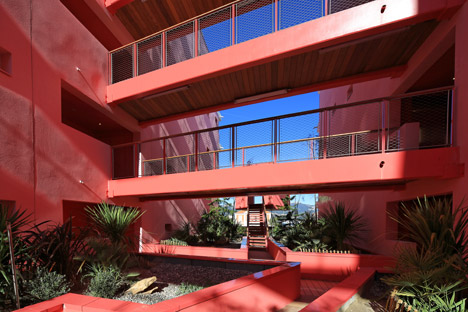 The building came about as part of a wider regeneration of the former shipping city of La Seyne-sur-Mer on the south-east coast of France, where dockyards closed in 1989.

The dockyards will be rejuvenated with a public park named Autumn Garden, which the apartments will also overlook. 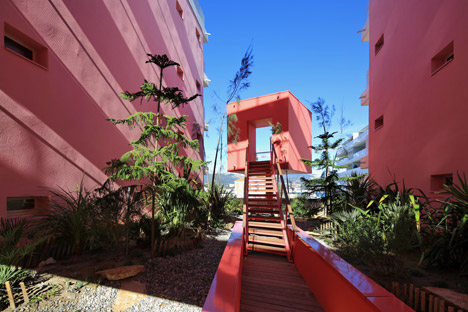 “The Redline plot could not have tolerated a single, solid block,” mentioned the architects. “[This] would have obstructed the views of the surrounding housing and prevented half of the 59 housing units from obtaining a view of the sea.” 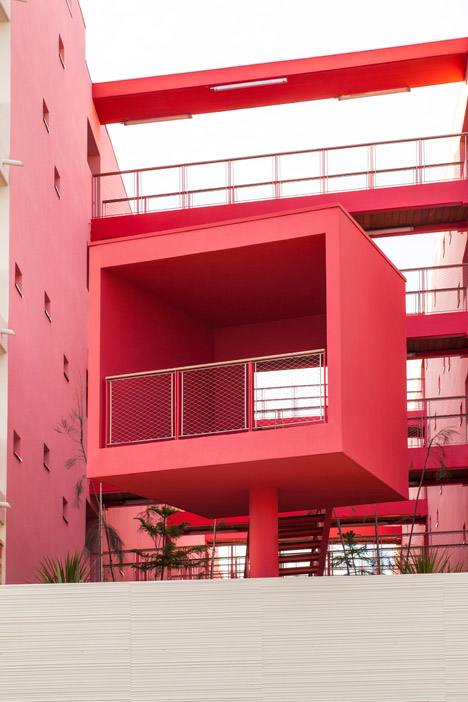 The long rooftop garden runs east to west via the centre of the site. “This east/west spatial organisation grants a multiplicity of amenities with apartments that have both front and rear facing views and an outdoor patio designed to ventilate and make the most of the vista,” mentioned the group. 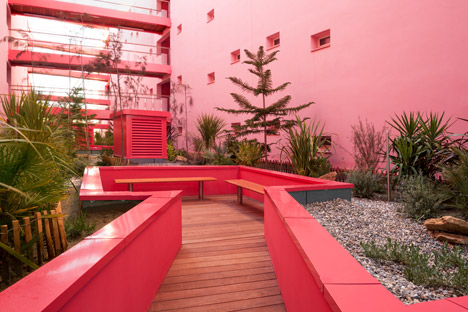 Brightly coloured walkways built from pre-stressed concrete criss-cross the void to connect the two blocks on each level. They mainly let residents in the east block to access the lifts, which are contained on the west side of the complex. 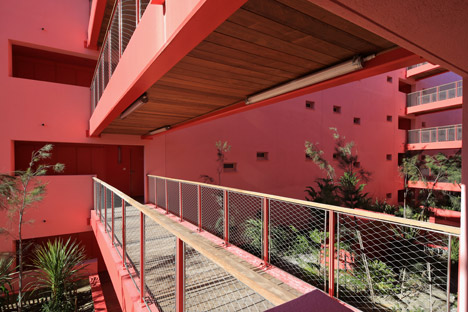 These walkways are enclosed with mesh balustrades and feature wooden floor surfaces. Strip lighting is set into the underside of each one to illuminate the spaces under. 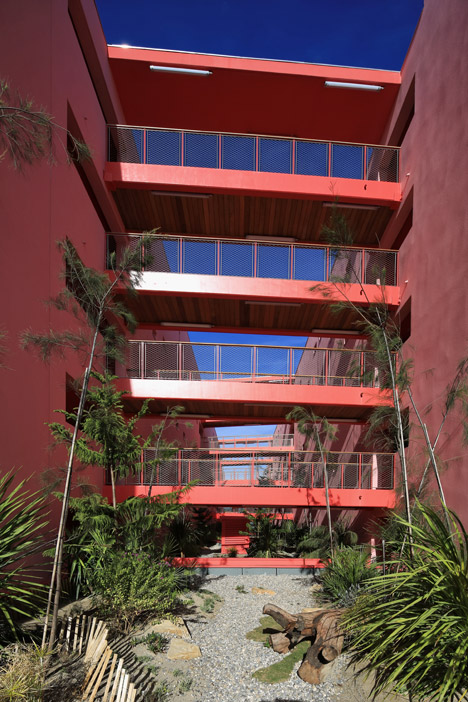 Beneath the walkways, the planted oasis of gardens and terraces is screened from the prevailing south-westerly winds by the higher concrete walls. 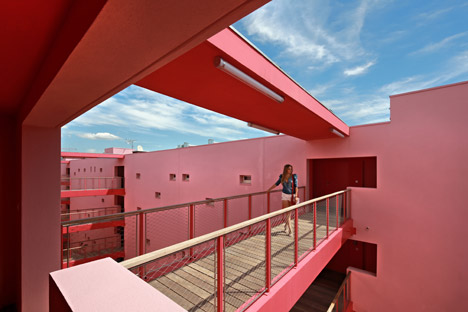 Pathways reduce by way of a series of raised planters filled with grey gravel and a selection of evergreen trees and spiky shrubs. They lead to a sunken seating location and a red concrete belvedere, which is raised above the gardens on a metal pole and accessed by a flight of actions. 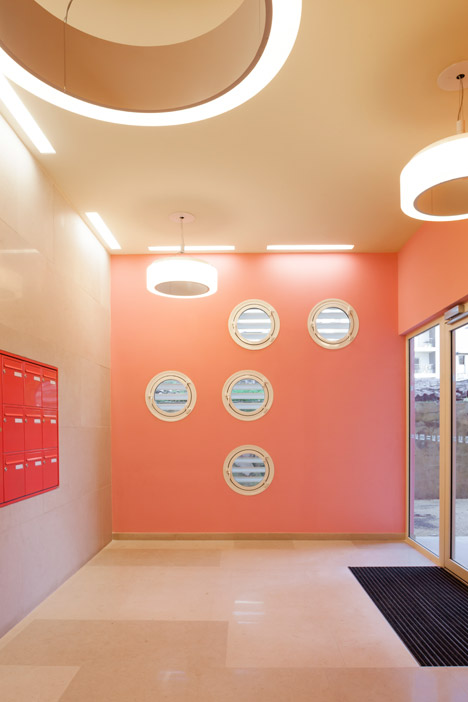 The podium has a single open side that angles towards the sea, offering a sheltered outside seating spot for residents. 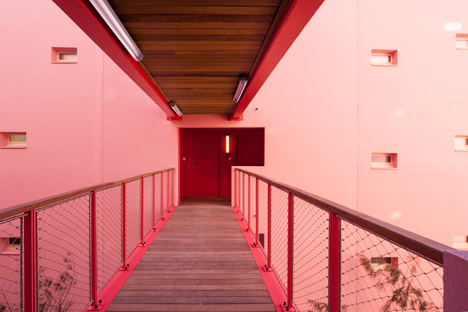 Modest deep-set windows face into the pink courtyard, whilst bigger windows in the cream-painted facades of the two blocks are directed towards the coastline. 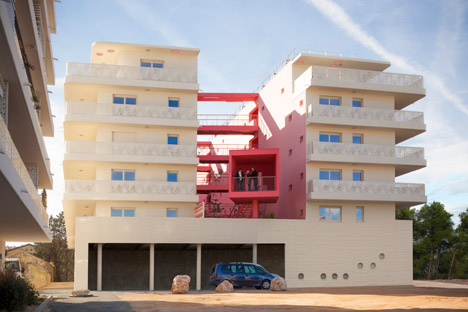 White balustrades with a perforated pattern enclose private terraces on the street-facing aspect of each apartment. The balustrades curve around the corners of the blocks to give the buildings a rounded profile. 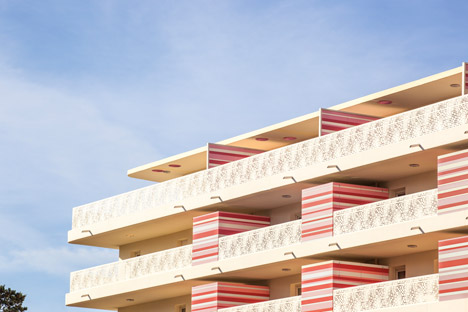 “The patio, belvedere and walkways invite contemplation of the landscape – on one particular side the Autumn Garden and on the other the Bay of Toulon,” mentioned the architects. 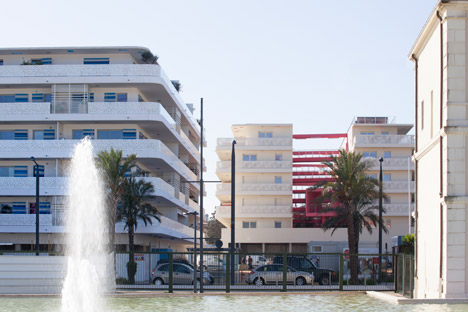 Dark pink and white stripy dividers, reminiscent of the material usually utilized on deck chairs and bathers’ windbreaks, separate every single balcony from its neighbour. They provide storage lockers for residents. 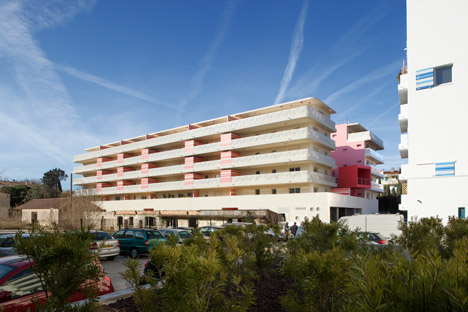 Photography is by Serge Demailly and Christian Michel.