Japanese studio Aoki Jun and Associates redesigned the facade of the Louis Vuitton store in the Ginza district of Tokyo with a patterned and perforated shell based on the brand’s monogram. 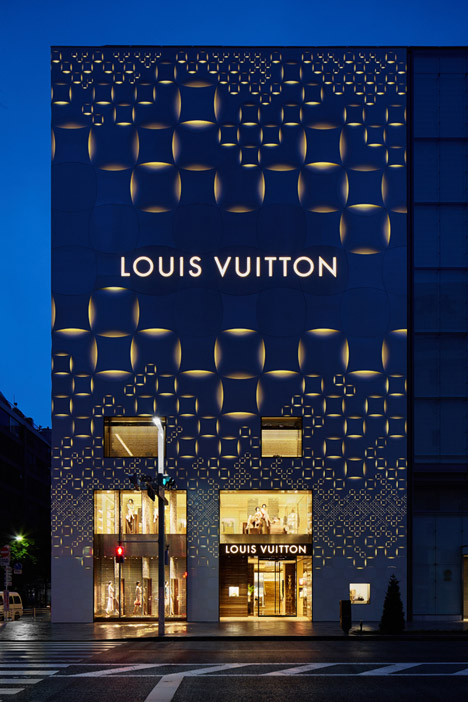 Aoki Jun and Associates was commissioned to produce the new facade for the corner plot site of Louis Vuitton’s Ginza Flagship store.

The architects fitted a pearlescent aluminum shell, patterned with a repeat motif that is intended to reference both Louis Vuitton branding and the recurring patterns of art deco design, to the existing concrete building. 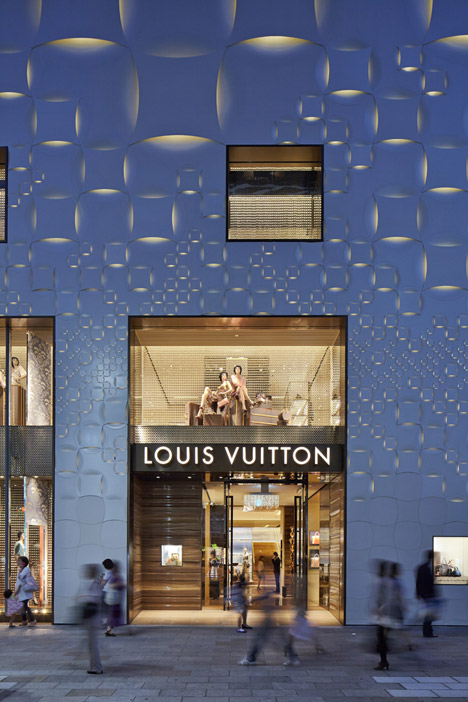 “The new facade of Louis Vuitton Matsuya Ginza is inspired by the history of Ginza, the city that used to be known for its art deco design,” said Jun Aoki. 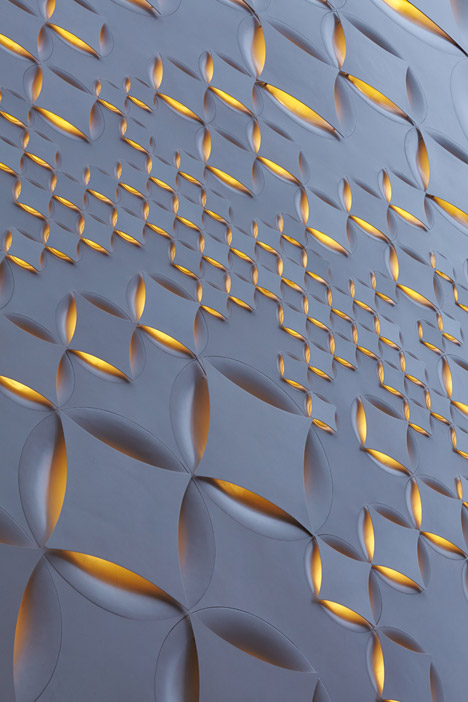 “Based on Louis Vuitton’s damier, which also is a repeated geometric pattern, the facade of Louis Vuitton Matsuya Ginza becomes our first softer version of damier, imbued with delicacy and richness that is found in organism,” said the architect. 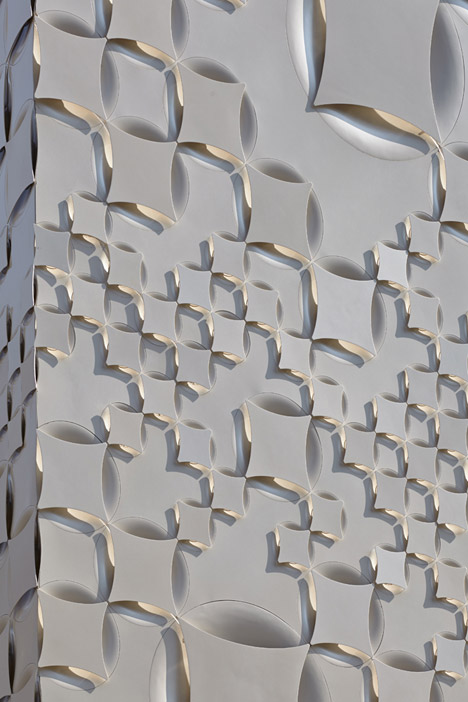 The architect impressed the design on sheets of aluminum coated with a pearlised fluropolymer paint – a type of paint known for its durability – creating a raised design that gives the building a quilted appearance. 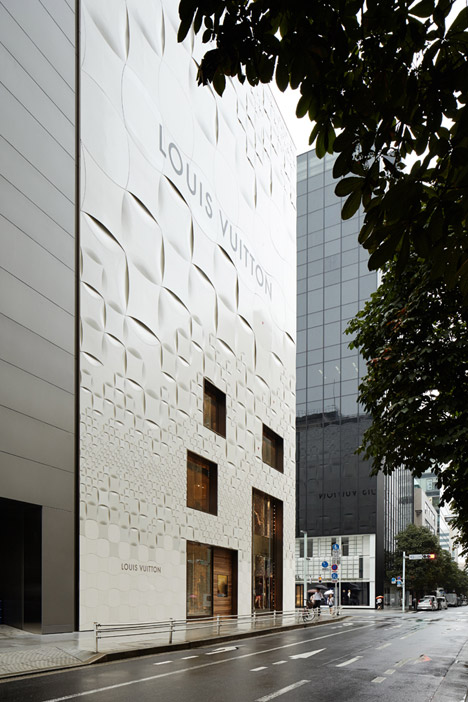 The panels mask the steel-framed reinforced concrete structure of the building beneath. 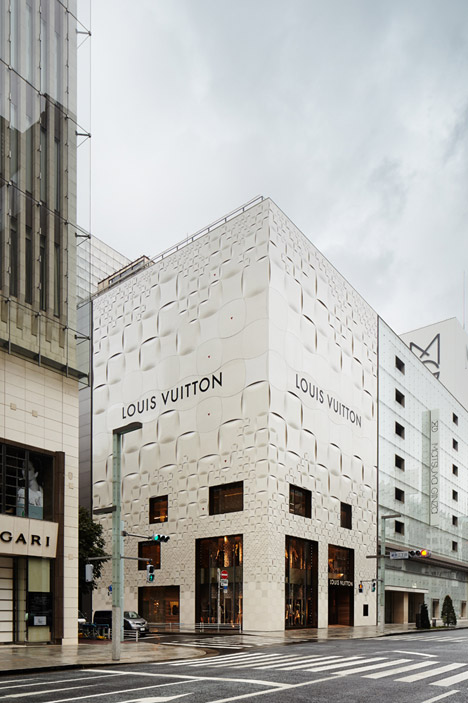 “Gentle bulges and dents elaborate the façade of opal beige reliefs. With this pattern, the facade reveals various appearances in sunlight, and also during the night, the LED lights behind the reliefs lit the facade to render another expression reminiscent of Louis Vuitton’s monogram,” said Aoki. 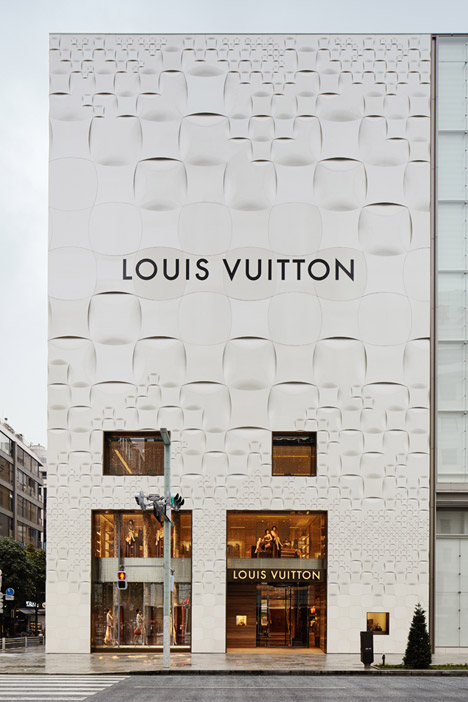 The edges of the raised design are perforated, allowing light from the interior shop floors to shine through, illuminating the facade at night.

Louis Vuitton signage and a combination of double and single height openings that frame doorways and display windows have also been cut out of the facade. 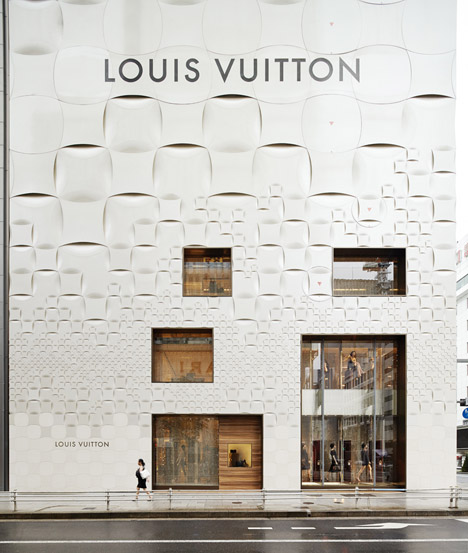 Aoki Jun and Associates was among seven studios shortlisted to redesign the Exhibition Road entrance to the Victoria and Albert Museum London, in 2011.