Looking through headlines from the fashion industry, you are going to be bombarded by news about technology and its integration directly into the products and lifestyle surrounding it. However, the latest breakthrough product has come from a collaboration between Google and Levi’s, who have together made an immersive jacket that connects the user to their cell phone. Now, we’ve all seen those hooded sweatshirts where the drawstrings are actually ear buds, but this particular jacket takes that concept and pushes it to a whole new, futuristic level – all in the form of a classic denim jacket. 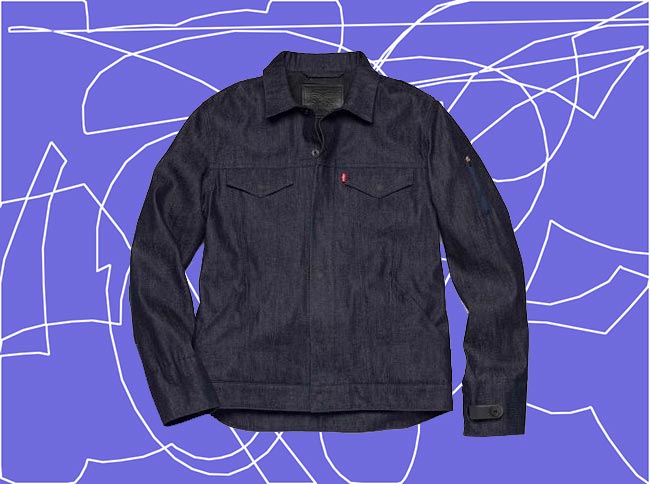 This unique product was unveiled just last Friday, May 20, at an annual conference for developers, Google I/O. The name the brands landed on for this jacket is a bit too long for comfort, as it was dubbed the Levi’s Commuter x Jacquard by Google Trucker Jacket. We’re just hoping that they come out with a simpler, catchy nickname in the near future, but in the meantime, a mouthful of a name isn’t enough to deter us from the potential this jacket presents; for now, we’ll just be happy calling it the Commuter Jacket.

As is presented in the name, the jacket is made using a Jacquard yarn, which has the same appearance as a standard yarn, but actually also contains metallic alloys. The technology is woven directly into the fabric, so you might as well be wearing your cell phone. Where these conducted yarns are sewn into the garment, the wearer will be able to interact with the fabric, and will thus be able to perform a series of actions in sync with their smartphone. For instance, if you tap or swipe particular areas of the sleeves (just as you would on your phone), your Commuter Jacket will perform actions like changing your music, answering your phone, or giving you directions on a map app.

With the ease of use, the Levi’s Commuter jacket was created with bikers in mind; more specifically, people who use their bikes as a major mode of transportation. The technology of this is reminiscent of Bluetooth headsets, as you’re wirelessly touching buttons to get sound, and adds in even more accessibility by moving it around to easier-to-reach areas of the body; again, making it ideal for bikers.

For the most part, the Commuter Jacket is totally washable, except for a small smart button, that looks just like any button on a denim jacket would, which is located on the sleeve. But all you need to do is remember to remove the button before washing it, and you’ll be all set. And everything from that small piece has the same look as a normal Levi’s jacket.

This product is going to be ideal for anyone, not just bike commuters, because of its simplicity. Carrying a smartphone around and pulling it out all the time can really become a hindrance of life in general, so this takes out some of that strain. This is a stylish, innovative solution that, if all testing goes well, will be a hot product when it becomes available for purchase next year in spring 2017.

There has been no price announcement yet, so we’ll be eagerly waiting to hear about that. Beta testing will begin this fall, so we’ll know sooner rather than later how successful this product will be on the market. But with the way it sounds so far, we’re going to be in for a great new, groundbreaking addition to the world of innovative fashion.