New York 2015: in the first of a series of interviews with prominent New York designers, Lindsey Adelman tells Dezeen about how she became a pioneer of the city’s burgeoning lighting scene (+ slideshow + transcript).

Adelman, 45, has become a key figure in New York design since setting up her eponymous studio in 2006. Her lighting designs are sold by internationally renowned galleries including Nilufur in Milan and BDDW in New York, and have been exhibited at the Cooper Hewitt National Design Museum and the Design Miami fair.

Her DIY approach to design and production influenced a number of emerging New York designers, resulting in a “makers” scene that Adelman said began after the financial crash in 2008.

“I think a lot of people wanted to stay as creators and really started looking into options of doing it themselves,” she told Dezeen at this year’s International Contemporary Furniture Fair (ICFF) in New York. “Cutting down an overhead, finding other spaces, not taking a salary, setting up a shared woodshop or a collective ceramic studio etc.”

“Just making it happen rather than relying on other companies, because that wasn’t an option,” she continued. “I think for those reasons, there’s a huge burst of creativity that came after that time.”

Adelman’s fascination with lighting began during her studies at the Rhode Island School of Design (RISD). She then worked with David Weeks – another pioneer of New York’s lighting scene – before setting up her own studio and continuing to work with the field she describes as “fun” and “spontaneous”.

“I find [lighting] interesting because it’s an immaterial substance,” Adelman said. “This idea of working with something that’s about effect; it’s intangible, you’re really shaping form to maximise a lighting effect.” 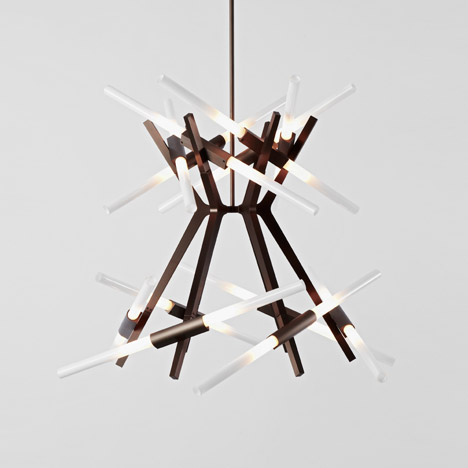 In their Manhattan loft space, Adelman’s team of 28 works on full-scale models of the predominantly glass and metal lighting pieces before producing and shipping limited runs of each design in-house.

A large portion of New York designers also focus on lighting because it is relatively easy and cheap to produce, according to Adelman.

“A kid could make a light,” she said. “It’s positive wires and negative wires that get spliced together with a bulb and a socket. There’s so much freedom in it, it’s not like you need a specific type of training. It’s not very expensive as well.” 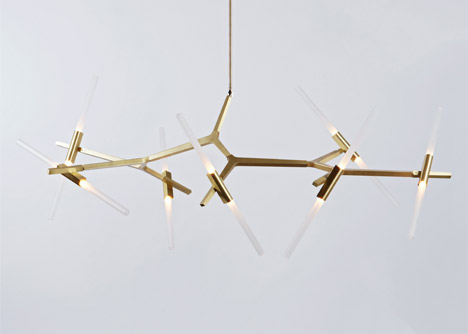 At this year’s ICFF she debuted work by Mary Wallis, who has worked with the studio for over five years. Another of her protégés, Bec Brittain, presented work under her own name at the event earlier this week.

The spirit of collaboration between New York’s designers and brands is aided by an unusual shared interest in archery, initiated by the founders of design gallery BDDW.

“They’re into archery and they started a club, then invited a number of companies and studios and individuals to be part of it,” she explained. “When you go up to shoot arrows, you end up talking in a different way that’s more relaxed.”

Adelman’s other projects include creating the set and furnishings for an upcoming music video, in which she also features as a backing dancer.

Photography is by Lauren Coleman, unless otherwise stated. 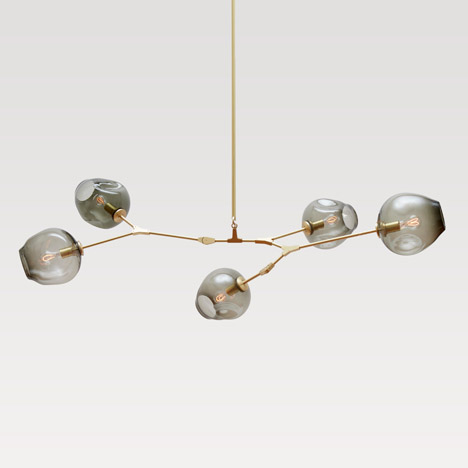 Read an edited version of the transcript from our interview with Lindsey Adelman below:

Dan Howarth: How did you get into design?

Lindsey Adelman: I really discovered industrial design ages ago when I was working at the Smithsonian institution – that was when I already had a degree in English.

I’d not crossed paths with this kind of design, but I learned about exhibition fabrication while I was an editorial assistant at the Smithsonian and became really interested in this idea of having a professional career making things that were outside of sculpture or being an artist.

I wanted to find out more so I applied to RISD [Rhode Island School of Design] and I started focusing on lighting while I was still in school. I graduated in 1996, and ever since then I’ve been in the same industry trying new things. 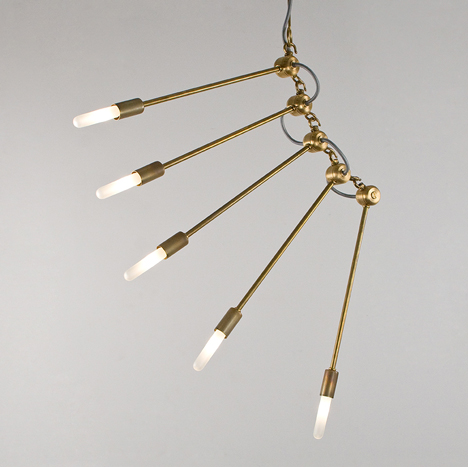 You Make It Mobile

Dan Howarth: Why did lighting in particular interest you?

Lindsey Adelman: I find it interesting because it’s an immaterial substance. This idea of working with something that’s about effect; it’s intangible, you’re really shaping form to maximise a lighting effect.

It’s a very different way of working than say doing a sofa, or table or chair, and I think that it affects everything else in the room in terms of mood.

It’s an interesting category where you can have an effect on vintage pieces, nature, or different types of wall surfaces. That’s why it interests me.

Dan Howarth: How did you come about setting up your studio?

Lindsey Adelman: I got started after I worked with David Weeks, I worked for his company and then we partnered on another company called Butter. Then I took some time off when I had a baby and in that time I really gave some thought as to what kind of studio I want to have and what kind of process I wanted to have in my daily life.

When I set up my studio, it was really just one model of a light. I was working out of my apartment, I didn’t have any employees. Little by little, orders started coming in because I had the first pieces in an exhibition.

When I had a bit of money I hired someone as an assistant, so it grew very slowly that way. 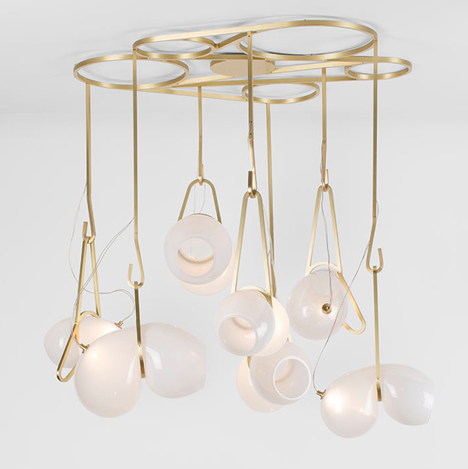 Dan Howarth: You’ve always kept the idea of making and hands-on testing in-house. Why is that important to you?

Lindsey Adelman: Everything we do is developed through daydreaming, through conversations, through one-to-one scale models, through testing with actual bulbs and sockets and putting them around a space.

In the secondary or third step we bring in CAD and start doing models in Solidworks. I think it really shows in the end product that there’s been so much hands-on experience with materials first.

Dan Howarth: After you became established there was an explosion of young designers that are part of a “makers” scene in New York. How did that come about?

Lindsey Adelman: It was just after the crash in 2008-2009. I think a lot of people wanted to stay as creators and really started looking into options of doing it themselves. Cutting down an overhead, finding other spaces, not taking a salary, setting up a shared woodshop or a collective ceramic studio etc.

Just making it happen rather than relying on other companies, because that wasn’t an option. I think for those reasons, there’s a huge burst of creativity that came after that time. 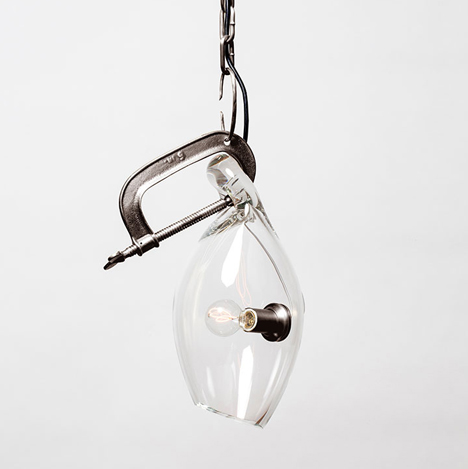 Dan Howarth: Quite a few of these studios also do lighting. Why is it so popular?

Lindsey Adelman: I love lighting because it’s relatively easy. It’s positive wires and negative wires that get spliced together with a bulb and a socket. A kid could make a light.

There’s so much freedom in it, it’s not like you need a specific type of training. And it’s fun, it’s spontaneous and there’s no right or wrong way to do it.

Technology evolves so quickly, basically every month something is better. Either a transformer or the temperature of an LED, all of these things get better and better and I think that’s very motivating. You can design products around exactly what is getting released that month.

It’s not very expensive as well, compared to working in mahogany, say. So I think that’s part of it too.

Lindsey Adelman: The Collective Design show is in its third year and I think that might reflect a lot of what’s happening in design. Before, you could only see furniture collected at Art Basel and Design Miami, and various trade shows around the world, but not so much in New York.

I think that show is kind of proof that that culture exists in New York as well. So perhaps there’s a population making work on a limited basis, like rare limited-edition furniture pieces, and there’s also a growing market of informed collectors. 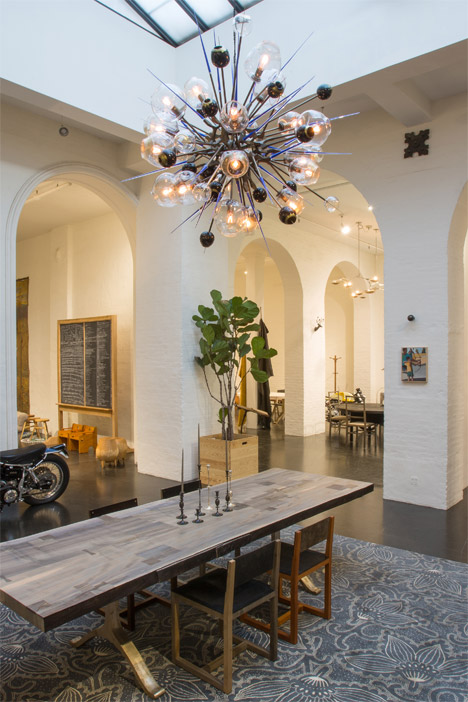 Dan Howarth: There’s more of a taste for luxury?

Lindsey Adelman: Yeah, because in New York previously it was mostly vintage work that was perceived as having the highest quality and value. Now, I think pieces that are made today are starting to receive that perception.

Dan Howarth: As a studio you’ve started collaborating with designers. Is this something that will continue?

Lindsey Adelman: Mary Wallis has worked with me for over five years, she’s amazingly talented and it was very fun to put her collections into production. We can offer this work to our client base, which is really nice.

I didn’t really think about it as a huge decision frankly, it was more organic. I love working with her and I still get to work with her every day, so it wasn’t a huge policy change or anything like that. 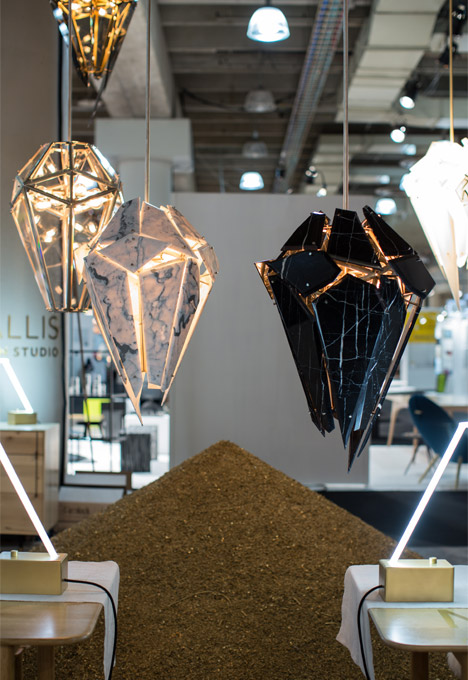 Edie by Mary Wallis for Lindsey Adelman, presented at ICFF 2015

Dan Howarth: What else do you have coming up?

Lindsey Adelman: Other projects I’m doing – next month I’m releasing a music video, which will be really fun. Every year I make work for Milan, I have a few exclusive collections with Nilufar Gallery. It’s my push per year, creatively.

Our studio is releasing two collections per year in limited numbers, that’s how we’re handling standard models, which is quite different than in the past. When they sell out, they sell out and people wait until the next collection is released. That’s helped to keep the quality up on all levels in our studio, because I think if quantity gets too high our studio becomes something entirely different. It’s almost impossible to maintain quality.

Dan Howarth: Then it becomes more about distribution and less about design?

Lindsey Adelman: Yeah, there are so many things about it that aren’t the type of challenges that I’m interested in.

Dan Howarth: Tell me more about this music video.

Lindsey Adelman: We got together, 16 of us from the studio are backup dancers. My friend who is a choreographer, Danielle Martinelli, she choreographed it and she taught us the routine once a week for a couple of hours.

I designed the whole set and our studio designed the costumes, the jewellery, the wallpaper, the rugs, candelabra and all this stuff. For two days, we shot it and it’s a three-minute video.

It was so fun. This summer I’m going to start shooting the next one, and probably release it in the spring or something. Every year we’ll do something like this. 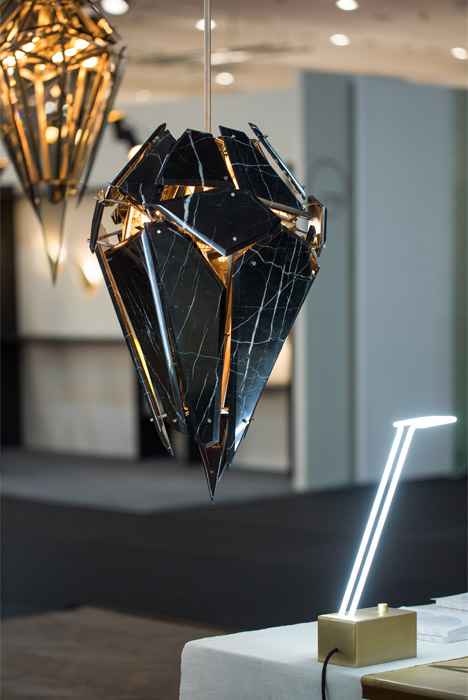 Edie by Mary Wallis for Lindsey Adelman, presented at ICFF 2015

Dan Howarth: And your studio is also into archery? That seems to be a popular thing among New York designers.

Lindsey Adelman: BDDW started this. They’re into archery and they started a club, then invited a number of companies and studios and individuals to be part of it. We have three teams and it’s great fun. It’s all because of them.

Dan Howarth: That seems representative of the way designers and studios work together in New York.

Lindsey Adelman: It’s nice for us to have a focus, for us to come together. When you get a lot of people like me who are geeky in a way, you need a focus.

It’s like when you’re at a table at a family reunion and there’s a puzzle going on the table and everyone’s putting pieces in, this subconscious chatter happens. It’s like that when you go up to shoot arrows, you end up talking in a different way that’s more relaxed.

The competition is fun and it’s pretty easy to get good at archery, so everyone feels pretty good about themselves. It’s really fun and it’s great that it started.