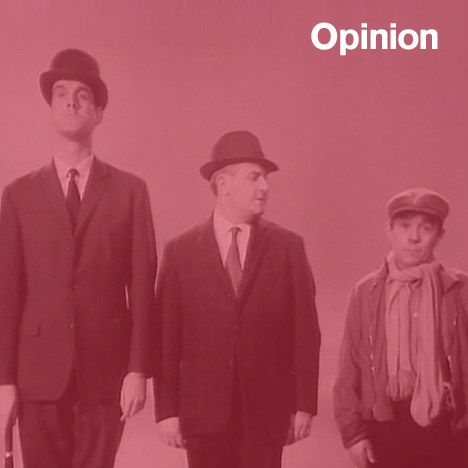 Viewpoint: the farcical in-fighting amongst architectural training and practitioners – who blame every other for the industry’s failures – has to cease, says Robert Mull, dean of London’s Cass College of Architecture.

There is a 1960s comedy sketch in which John Cleese, Ronnie Barker and Ronnie Corbett stand in a row and describe the English class technique. The tallest, Cleese, is upper class and the smallest, Corbett, is functioning class.

Each defines their position in relation to their neighbours. I am middle class simply because he’s upper class, I’m upper class because he’s doing work class, and so on. Each and every feels distinct but is completely dependant on their neighbour. The comedy stems from their inability to see that they are equally prejudiced.

The existing – seemingly limitless – spat between architectural education and practice risks becoming equally comic I’m an educator but practice is so boring, I am a practitioner rescuing bad college students from education since it is so lightweight, and so on.

Behind this farce, there is tragedy

But behind this farce, there is tragedy. The much-trumpeted separation between schooling and practice is a handy invention which permits both events to duck their responsibilities and blame each and every other for architecture’s problems – or worse, blame the bad graduate caught in this theatrical crossfire.

No this kind of separation exists. Like the characters in the 1960s sketch, we are all in it together. Practices educate, teachers practice, practices carry out research, colleges of architecture run practices, and so on.

And of course schooling is not limited to the period college students commit in formal training but it is lifelong, commencing in major college and continuing into practice via formal instruction, peer overview and yes, teaching.

If practice views architectural schooling as weak, it is partly simply because education displays weaknesses in practice, and vice versa. The combative tradition of the crit, the assumption that college students will operate 24 hours a day regardless of other commitments, sexism, competition and a lack of collective action all feed into and reflect factors of undesirable practice.

Similarly training also typically turns into lost at the edges of the discipline, working with philosophers, film makers, cyberneticists, and so forth. At its greatest this promiscuity assists define and enrich the discipline but usually it is an elegant distraction which rightly leaves employers pondering what a job applicant has been doing for 5 years.

Training and practice are locked collectively, like it or not

This will be a acquainted conversation for almost anybody working in architecture, but the ongoing squabble between architectural schooling and practice is specifically keenly felt in the United kingdom. A latest survey by the Royal Institute of British Architects identified that most employers felt that architecture graduates weren’t prepared for work.

The new London School of Architecture has been launched exclusively with the aim of making a bridge amongst the two and the RIBA has also brought in a round of reforms. But in spite of this, the tension in between the two displays no indicator of diminishing.

It is tit for tat – but blaming every single other actually is futile. Education and practice are locked with each other, like it or not.

As educators we walk a tightrope that reflects this balance. On the a single hand, we require to offer college students with the sensible expertise and understanding to be valuable inside current practice, and on the other, we want to give them with the self-confidence and bravery to query and extend recent orthodoxies. Fail to do each and we condemn our graduates to be either frustrated stars without the abilities to apply their vision, or worker drones with out the self-confidence to challenge their good deal.

So what more can be accomplished to ensure that this productive stability among expertise and bravery is strengthened and fewer college students fall?

At one level it is via reforming the structures of training and practice and the relationship between them. The list is now quite familiar: shorter programs, far more diverse routes to qualification, apprenticeships, live tasks, earn and find out, and so on. All provide far better back links in between schooling and practice, and are being pursued by institutions all over the planet.

It is time for the architectural community to do some hard work, rather than snipe at every other

It truly is at a far more fundamental level that the interdependency amongst training and practice demands to be recognised. It is time for the architectural community to do some tough perform to define frequent values and principles rather than snipe at every other. Exactly where would one particular appear for these widespread values?

At the Cass we are subject to all the pressures facing education and practice and I am positive we have a lot to solution for, but 1 point does work well. We carry with each other a extremely varied group of practices and college students.

We host practices as different as the AOC, Peter St John, EAST, Tony Fretton, ARU, Chora, DSDHA and the UFO in flip they educate college students with quite varied backgrounds and life experiences. When push comes to shove they all agree on a single issue: that architecture is a social artwork and that it is defined by its duties and responsibilities to a wider society, not by its duties to the self-referential planet of the occupation, practice or training.

This duty might be played out by creating schools in India, by making cautiously crafted elevations, by empowering regional communities or by exploring solar-powered housing, but the underlying values continue to be and can be relied on.

Our domestic squabble harms us all, not least college students

A concentration on common values and responsibilities – rather than distinctions – would lead to greater mutual respect in between schooling and practice. Portion of this would be a more open and much less confrontational dialogue about the capabilities, the two difficult and soft, necessary to practice and a dedication to companion effectively in their lifelong delivery.

This may well even permit us to operate collectively to address the actual concern facing schooling, which is funding, and lobby governments collectively to fund architectural schooling correctly primarily based on its social value in the very same way as science subjects and medication are offered extra assistance. STEAM subjects, perhaps, rather than STEM subjects. So Science, Technological innovation, Engineering, Architecture and Maths.

So let us cease the comedy. Our domestic squabble harms us all, not least students whose vitality, diversity and bravery is critical if we are to rediscover architecture and therefore architectural schooling as primarily a social artwork, respected and funded by all.