News: architecture firm Snøhetta has been named winner in a competition to design the new Paris headquarters for French newspaper Le Monde.

Oslo- and New York-based Snøhetta will work with local studio SRA on the design, which comprises a contorted building that arches up in the centre to frame a new public plaza.

The exterior will be clad with what is described as “a pixelated matrix of glass” with varying degrees of transparency, translucency, and opacity, intended to appear homogenous from a distance but more complex when viewed up close.

Since 2004 Le Monde has occupied a building designed by French architect Christian de Portzamparc, although just four years after completion it was alleged that the national newspaper was struggling to pay the rent – a reported €1 million (£766,000) per month.

No construction dates have been confirmed for Snøhetta’s building, and it is unclear what will happen to Le Monde’s existing home when the company moves into its new head office.

“The Le Monde Group is an icon in the media world, and its long-standing reputation of integrity and quality is a measure for media houses worldwide,” said Snøhetta co-founder and partner Kjetil Thorsen.

According to Thorsen, the design will focus on the relationship between the newspaper and the public, who he believes will feel a sense of ownership towards the building.

“The evolution of media is in focus and in particular the future relationship between readers and media users, the production of media on different platforms and their connection to the public at large. The Le Monde Group has chosen a generous, open and accessible model,” he said. 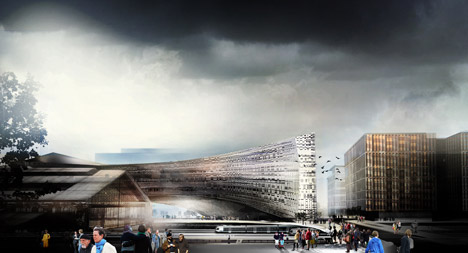 Thorsen also alluded to the recent terrorist attacks in Paris, which targeted employees of satirical magazine Charlie Hebdo, adding: “We also recognise the importance of this task in the current debates on the content of freedom of speech.”

The timing of the proposal, just two weeks after the attack on Charlie Hebdo, echoes the commissioning of the Hearst Tower in New York – the headquarters of one of America’s major media companies – shortly after the attacks on the World Trade Centre in 2001.

The public plaza at the centre of the building will divide the structure up into two connected halves. The first half, facing the street and the Seine, will include a visitor centre and an auditorium, while the second half, facing the railway, will feature a cafe.

The vaulted ceiling above the central plaza will be dotted with a programmable grid of LED lights, designed to represent “the transient flow of information, like clouds or stars moving across the sky”.

Modern And Practical table With Drawer