Architecture 00 has transformed a former shoe polish factory in London into offices, adding a zigzagging extension on the roof that mimics the gabled profile of the existing building . 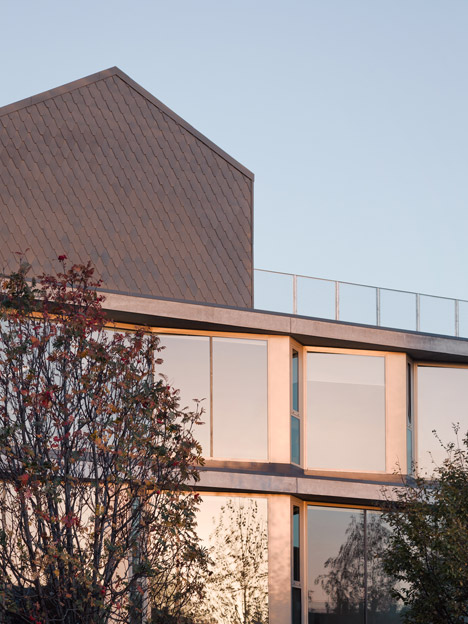 Charitable organisation the Ethical Residence Foundation asked London studio Architecture 00 to build a facility that could residence various charities on a disused industrial website in Vauxhall.

The constructing also supplies amenities which includes meeting rooms and a cafe – a resource that anybody can make use of. 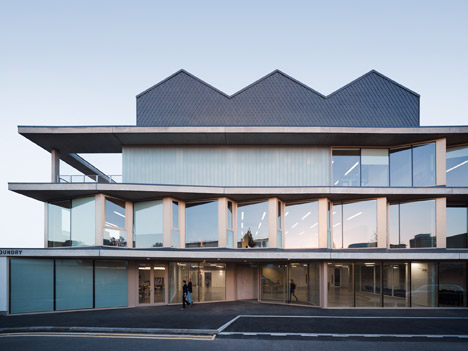 Recognising the aesthetic and spatial characteristics of the present 20th-century brick factory developing, as nicely as its heritage inside of the neighbourhood, the architects chose to preserve and lengthen it into an derelict service yard adjacent to the site. 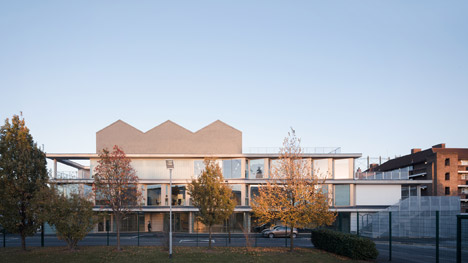 “The original factory has a beautiful robust quality that is in no way really matched by modern day buildings,” architect Lyndon Pepper informed Dezeen. “Its main facade is extremely handsome and the interior spaces are generous, with intriguing functions that were created for extremely distinct functions.” 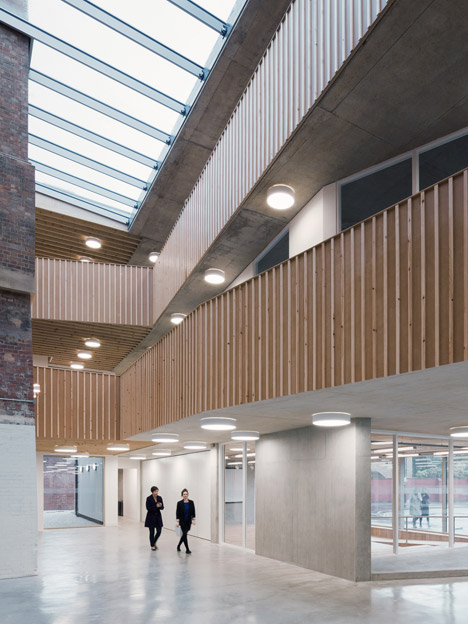 Retaining and restoring the existing framework also supplied a more value-effective remedy, so a design and style was formulated to update it with a new public entrance and communal spot, as well as additional offices, meeting rooms, presentation spaces, catering facilities and outdoor terraces. 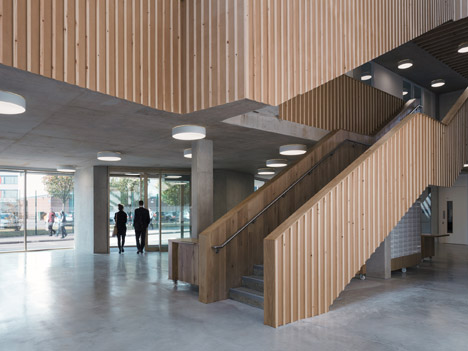 The unique brick facade attributes standard gable ends, as effectively as other standard details such as chimneys. The cowls – originally fitted to stop smoke blowing back down into the perform spaces – have been removed and replaced with extractors, making it possible for the chimneys to be repurposed as part of a new ventilation system. 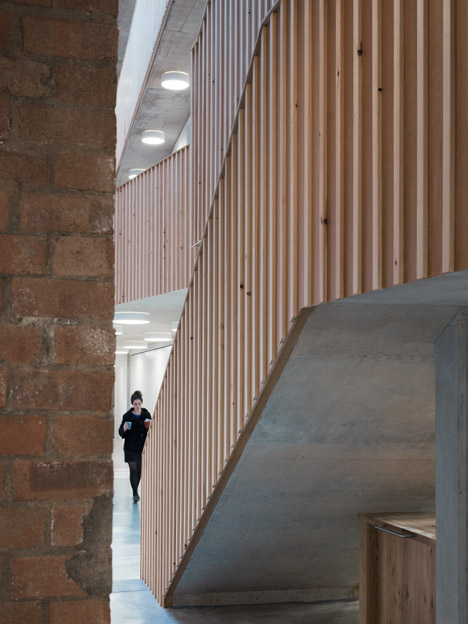 The spaces of the former factory became flexible open-program offices, with a series of smaller subdivided units on the first floor, while the new addition is made up of the communal and public amenities. 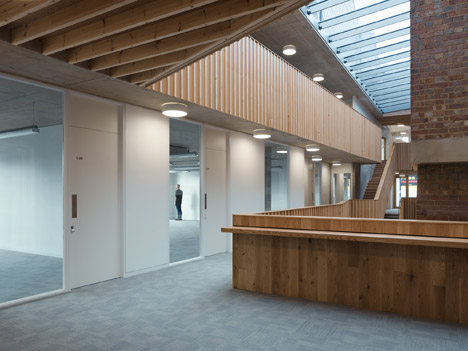 To boost the centre’s feeling of accessibility, the street-dealing with entrance facade comprises large places of glazing sandwiched between concrete slabs, permitting passersby to observe the routines taking place inside.

On the upper floors, the windows are angled to direct views towards the street rather than a close by residential location, which also aids to reduce undesired solar acquire via the north-south orientation of the larger panes. 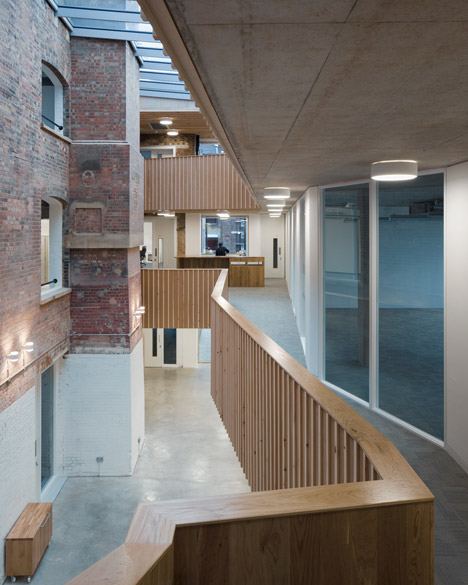 A cluster of linked rooftop meeting rooms with pitched roofs echo the shape of the factory behind and feature diamond-shaped zinc tile cladding intended to give them a hand-crafted aesthetic.

“The pitched roofs of the pavilion constructing had been developed to indicate a acquainted profile such as that of a village hall, but they also mirror the pitch of the present constructing,” explained Pepper. 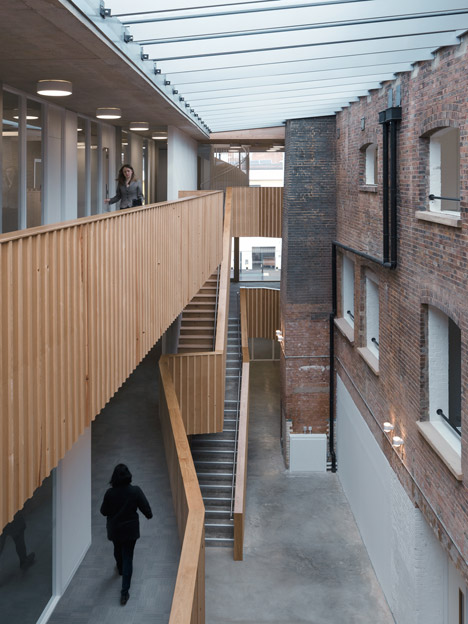 The space in between the outdated and new buildings is an atrium illuminated by a massive skylight, which can be utilized as a cafe or informal workspace.

The brickwork of the former factory’s external wall is left exposed and is complemented by simple, lower-cost components such as concrete and wood.

“We wanted to retain the pragmatic efficiency that accompanies most industrial buildings in terms of versatility, economic system and materials efficiency,” stated Pepper. “By choosing components that do not call for finishes, as in industrial buildings, you also turn out to be more cost-effective both in the quick and extended phrase.”

Vertical timber battens applied to the sides of staircases and the edges of the 1st-floor mezzanine accentuate the angular shapes of these surfaces, while also bettering the space’s acoustic properties by dampening echoes. 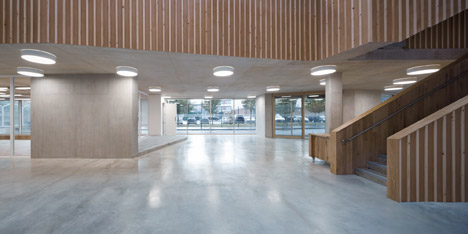 Wooden furniture fitted with castors emphasises the versatility of the interior, which is epitomised by a sectional reception desk that can be stretched out for use as a big banqueting table.

Photography is by Rory Gardiner.