News: MVRDV and fellow Rotterdam studio MorePlatz have been selected to create a pair of dockside office blocks in Mainz, Germany, with designs for buildings featuring zigzagging profiles.

Named Hafenspitze, the two buildings will become the first new structures in the proposed transformation of the city’s former shipping container harbour, described by the architects as “one of the city’s most important regeneration projects of the last decades”.

MVRDV invited MorePlatz – a studio founded by former MVRDV architects Caro Baumann and Johannes Schele, with an office in Munich – to act as local architect on the project. Their proposal is for a glazed 11-storey tower and a five-storey block with a roof terrace. 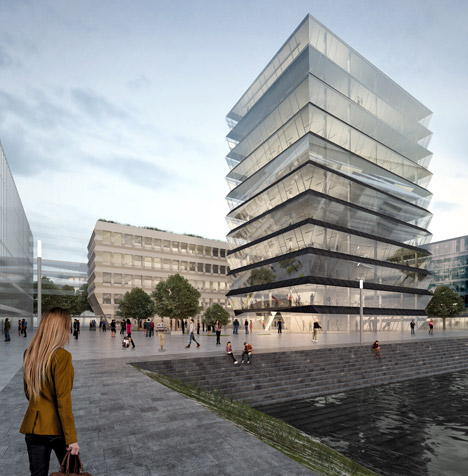 While the two buildings will differ in appearance and materiality, both are designed with zigzagging outer walls made up of angular windows, designed to offer better views across the city and waterfront.

The exterior of the tower will be divided up by horizontal bands clad in slate shingles, intended to reference local roofing, while the low-rise block will have a faceted concrete-panel facade designed to match the town’s stone-walled buildings.

Dezeen Book of Interviews: MVRDV’s Winy Maas features in our new book, which is on sale now

The two buildings will be located at the northern end of the basin and will frame a new public plaza.

“The design handles the tight urban restrictions in an extremely convincing manner,” said architect Axel Bienhaus, the deputy chairman of the competition jury. 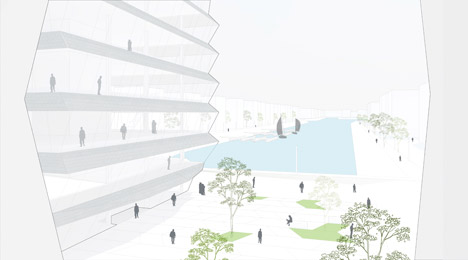 City mayor Michael Ebling added: “MVRDV will create an architectural highlight in the Zollhafen quarter. The profile of the city will be given a contemporary twist along Neustadt’s future promenade by the Rhine, forming an antithesis to the medieval heart of the old town.”

Construction of Hafenspitze is set to commence next year.

65 Proposals For Decoration In The Living Room!