The island of Kea in Greece seemed the perfect location to settle down and enjoy magical breezes serpent among olive trees. This modern House in Kea was seen by architects Marina Stassinopoulos and Konstantios Daskalakis as an opportunity to employ the island’s traditional building practices in a modern and highly functional residence. By rearranging the site’s terracing while maintaining local flora, the architects created a modern Greek house design connecting volumes of living spaces while allowing them to be independent. A sloped site and the beautifully simple terracing allowed architects to create different courtyards and open areas integrated in the volumetric architecture and terraced landscape.

With an adapted floor-plan, the home was imagined functional, cozy and inspiring: “The building is placed on a terrace. The entrance to the house is found in the void between the volume of the house and the terrace behind it. A longitudinal course, parallel with the gradient of the slope connects the distinct building volumes and three courtyards, each having different characteristics: a covered courtyard (in the heart of the building), a shaded one by the oak trees (close to the livingroom) and one exposed to the sun (at the end of the corridor). Perpendicular to the longitudinal course one enters the main areas of the building (the livingroom and the two bedrooms), which open up towards the sea. The circulation and the service spaces (entrance, corridors and bathrooms) are expressed as voids that connect the differing volumes of the primary spaces. ”

Defined by simplicity and displaying an eco-friendly nature, this modern Greek house displays its flat roof as the main facade, since the interiors are accessible from the top floor. Still, it could never compete with this unique rooftop infinity pool floating above unspoiled Greek island scenery. Photos by Yiorgis Yerolymbos present the private stone house on the island of Kea in Greece as a beacon of modern lines at night, capturing views of the awe-inspiring waters beyond.

It’s easy to imagine living in a modern Greek house like this one for anyone who ever visited Greece. This island home is the perfect hybrid between traditional and modern.

House in the Greek Countryside by Tectus Design

Charming Traditional Greek Home on the Island of Tinos 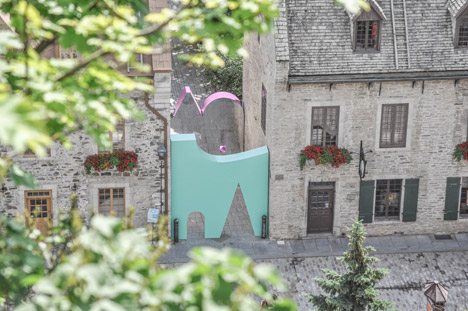 Decorating Ideas
Pomo summer season: layout collective Fontaine/Fortin/Labelle has blocked both ends of a lane in Quebec's Quartier Création with a Postmodern-influenced set up of colourful walls...