A cross made from two steel I-beams frames the entrance to this brilliant white funeral chapel in Hungary, by nearby firm L.Art Architectural Workplace . 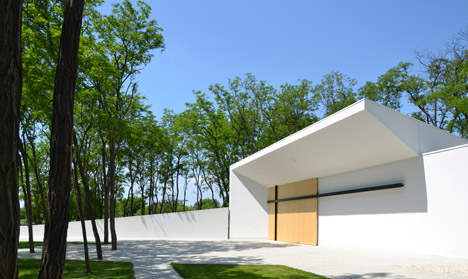 Surrounded by trees, the modest chapel stands at the entrance to a cemetery in Dabas, a town south of Budapest. It comprises a single-storey concrete framework with a sheltered entrance and a basic bell tower. 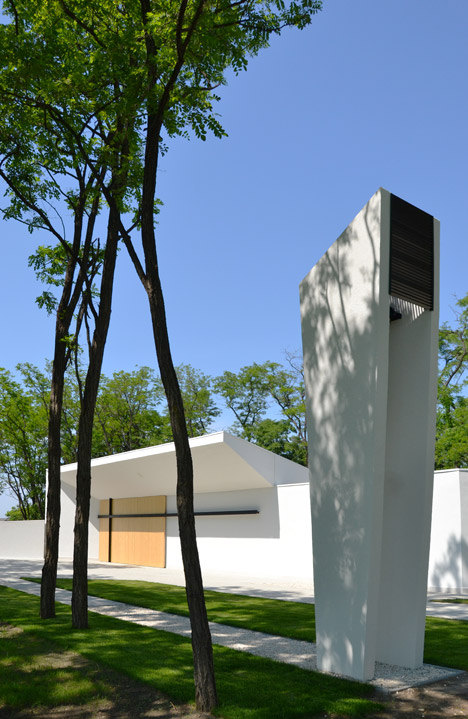 L.Art Architectural Office designed its design around a wish to contain numerous spiritual and biblical references and metaphors in the form of the constructing. 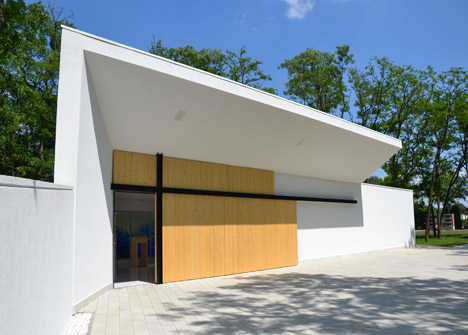 “We believe that architectural aims are nothing at all but messages of a modern era – a metaphor about the partnership between today’s people to their earthly lives,” explained the architects. 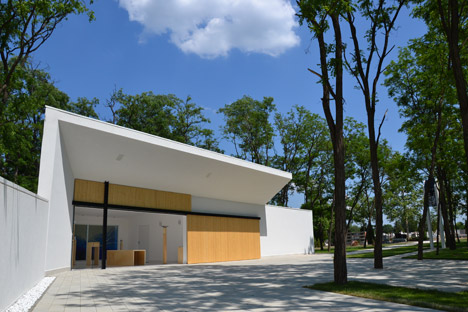 “We aim to signify urban morphology in terms of employed materials and other people,” they extra. 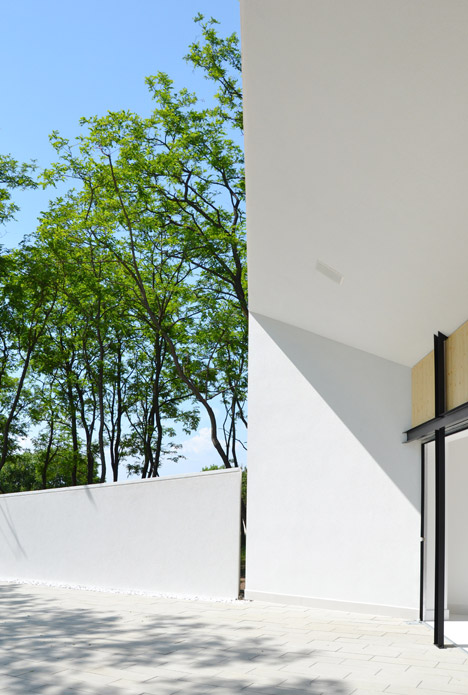 The most prominent of these is the large entrance – a steel cross that supplies the supporting framework for a wooden door.

When closed, the door could be mistaken for a static panel, but it slides open to produce either a regular-sized doorway or a much more generous opening. 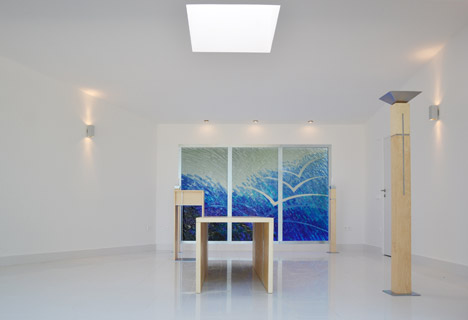 “By pulling away the sliding partition, the inside and outside becomes one particular, and everyone gets to be involved in the ceremony,” said the architects. 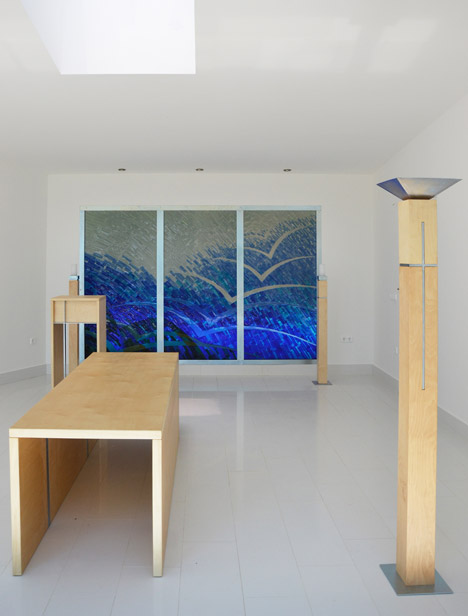 They also added a lengthy tapered wall that prospects up to the building’s entrance, and another that extends back into the woodland. These are intended to signify the journey from birth to death.

The bell tower stands separate from the constructing but features the same white-rendered concrete structure. Like the wall, it tapers outwards at the best to generate enough space for the bell. 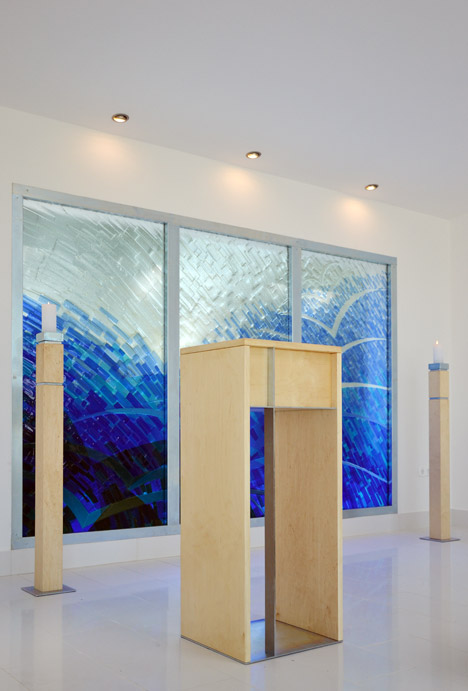 Within, the initial area of the 128-square-metre chapel centres around the catafalque – the wooden stand exactly where the coffin is placed throughout a funeral service. A skylight overhead directs light down onto it. 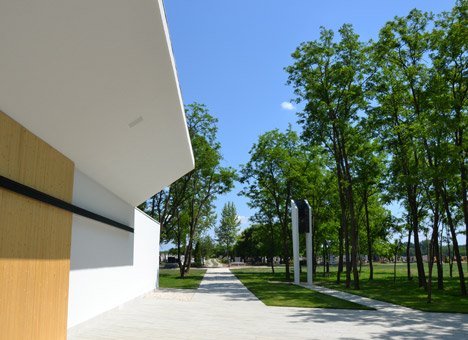 A stained glass wall at the back of the space presents an abstracted image of birds in flight.

There are also three other wooden components – a lectern and two candle stands. 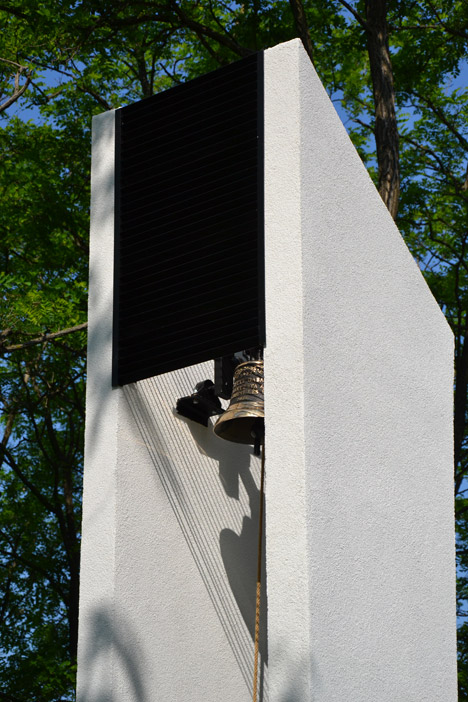 “[It is] a transitional spot,” explained the architects. “Up front it is the earthly life, and the inner component of the constructing is in which the final journey commences. The transparent spirit bird on the blue glass triptych symbolises the other side.” 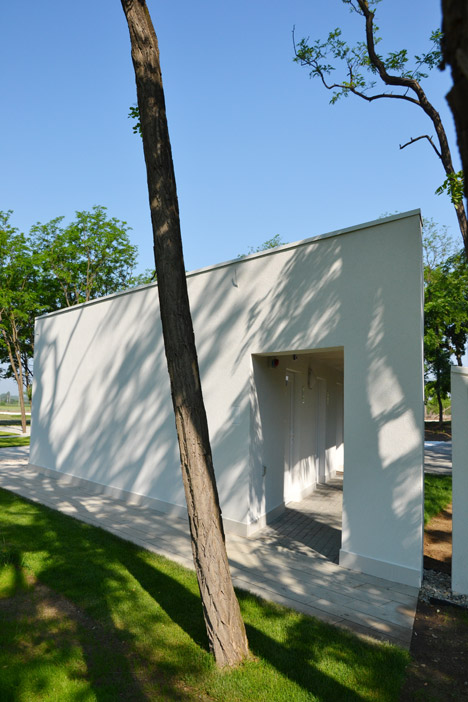 “The light shines in from above and the rays of it that hit the catafalque,” they extra. “They symbolise the creator, who is present here.” 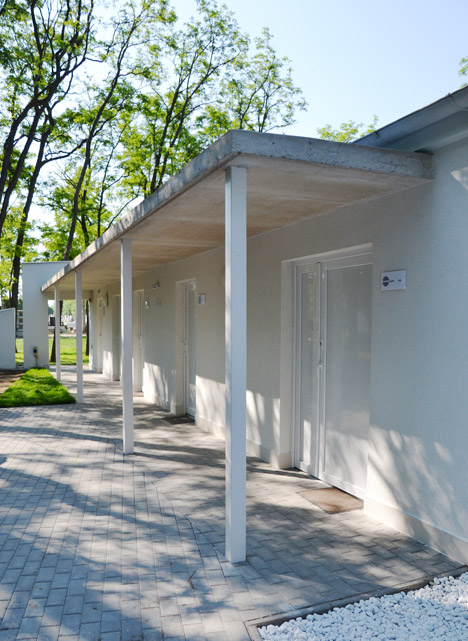 A doorway leads by way of from this space to a 2nd hall, which opens out to the landscape at the rear. The rest of the building accommodates toilets and ancillary spaces. 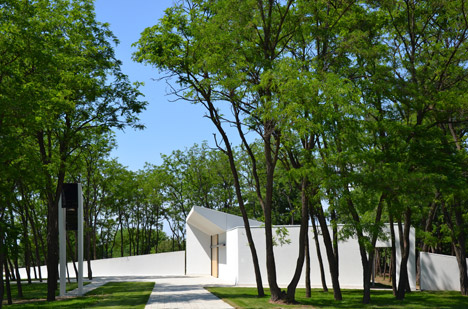 Photography is by Dorothy Sara Ligetvári.