A tall white wall wraps around the base of this house in Tsukuba City, Japan, screening it from the street and creating the illusion of a triple-level structure . 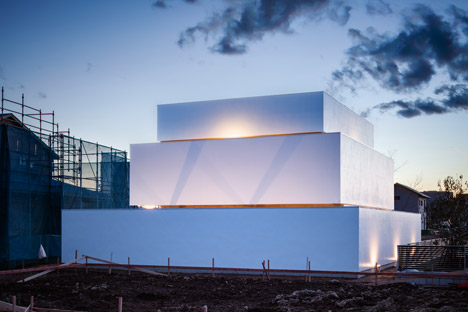 Kichi Architectural Design designed the two-storey home for a couple and their three children in Tsukuba, a city 40 miles outside Tokyo. While the home has been given the name Circle House, it gives the impression of having three rectangular floors. According to the architect, the name originates from the building’s layered form, which is intended to represent the circular ripples that often appear on the surface of water. “The facade imagined the threefold circle which floats on the surface of a river,” explained studio founder Naoyuki Kikkawa. “The facade creates the image of three overlapping circles rising up from the expansive lawn.” 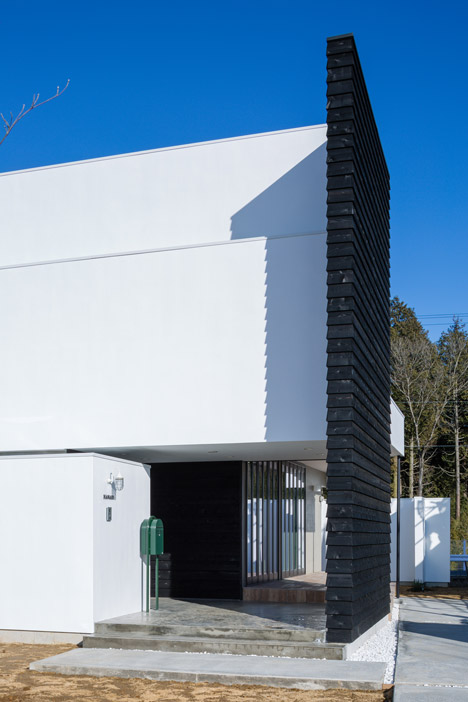 The first wall encloses a narrow strip of land around the lower floor of the property, providing daylight while maintaining privacy from neighbouring buildings and the street.

The second extends up from the slightly larger ground floor to conceal a first floor balcony, while the third wall is topped by a flat roof. 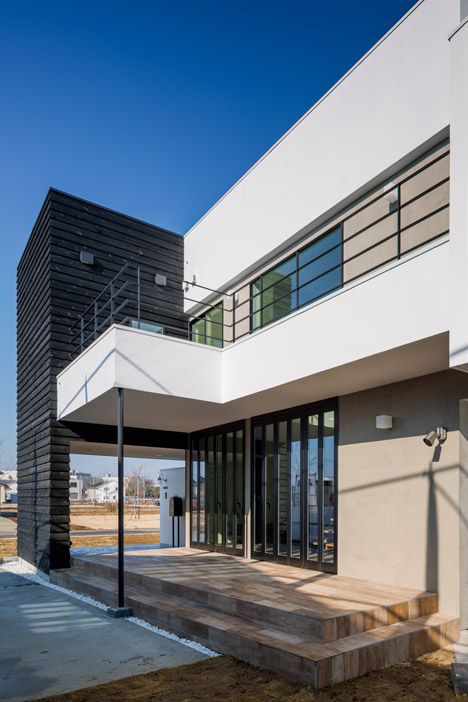 The perimeter wall wraps the lower floor of the property on three sides but on the fourth side a strip of blackened timber marks the entrance. This is made from planks of red cedar that have been painted black to contrast with the white facade. Wide oak steps lead up to two glazed walls, which concertina back to join the terrace with the living space. Inside, oak floorboards that run in the opposite direction to the steps cover the living area, while traditional tatami matting is used to create the chequered floor of an elevated lounge. 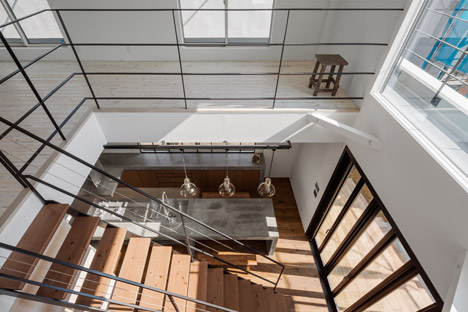 The main kitchen unit and a sink for a ground floor bathroom and utility room are both made from wood covered in a screed of mortar to give the appearance of solid concrete fixtures. 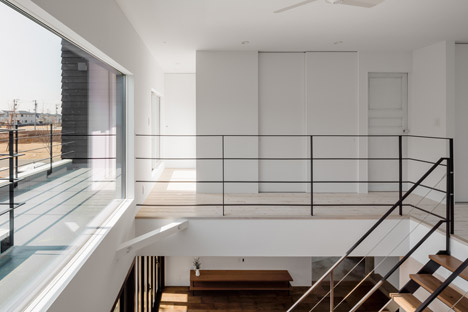 “The framework for the kitchen is wooden,” explained the architect. “Mortar has been painted on the surface.” 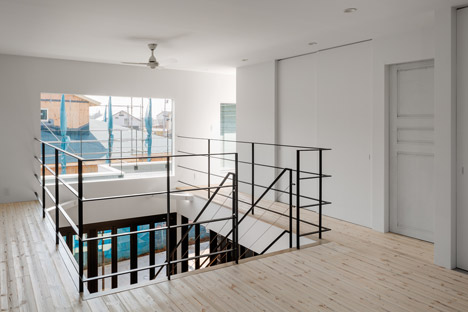 A mortar-covered bench that is integrated into the wall along one side of the open-plan living space doubles as a step up to the elevated lounge. 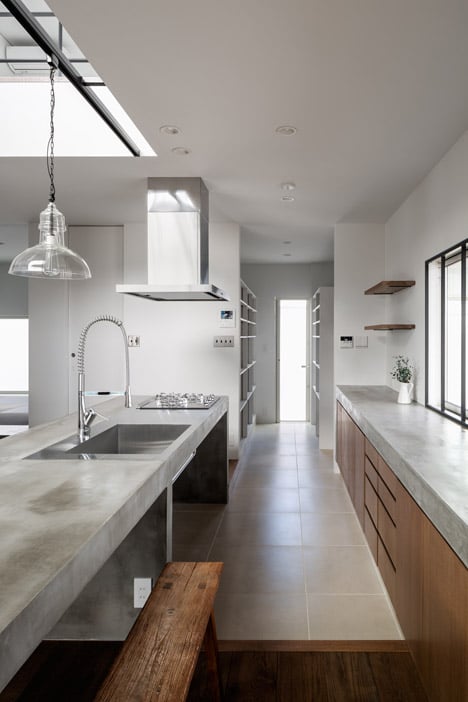 “The interior blends a tatami-floored Japanese space with a modern-vintage space,” said the architect. 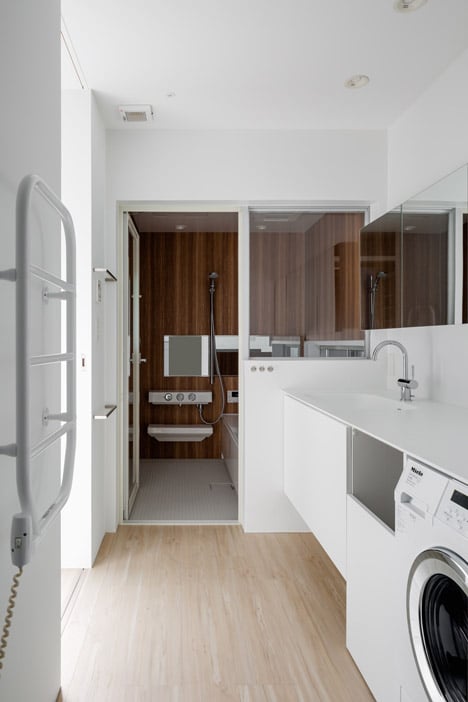 A stainless steel extraction hood and sink are positioned at one end of the long kitchen island, while a dining area occupies the other. 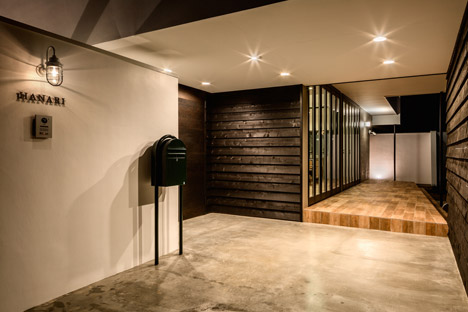 Pendant lights with bell-shaped glass shades hang in a line over the breakfast bar. Two wooden benches that sit below the counter are made from Indonesian teak. 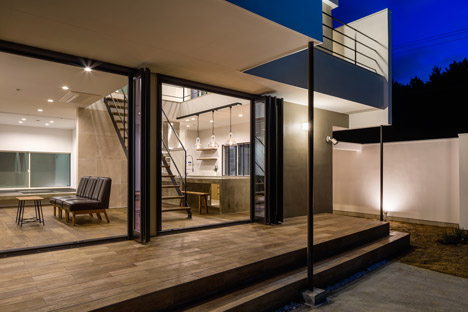 A flight of stairs with timber treads and black metal banisters leads to the upper level where the floorboards change from oak to pale pine. Bedrooms, bathrooms and closets sit around the edge of the stairwell behind white sliding doors. 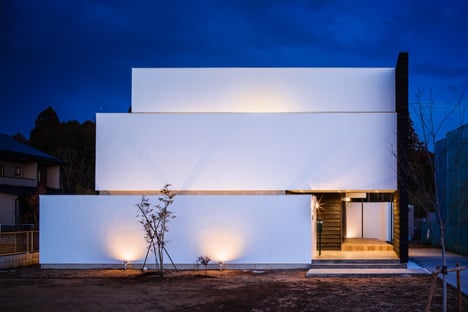 Photography is by Ippei Shinzawa.