The two main buildings of this Portuguese holiday complex by I-da Arquitectos are dug into a hillside, partly burying them in the sloping terrain . 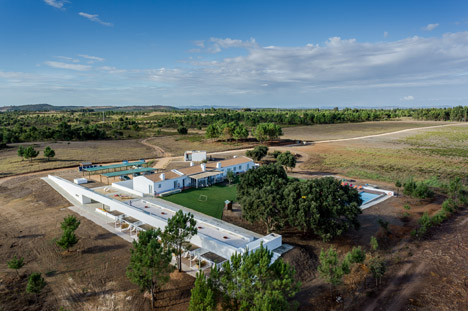 Lisbon-based I-da arquitectos designed the 820-metre-square development, named Pé no Monte, on 10 hectares of land on the Alentejo Coast, in the south west of Portugal. 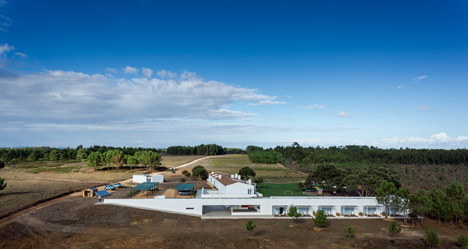 Formerly occupied by a dilapidated building, the site is bordered by dense vegetation and trees on its southern perimeter, with a stone well, oak trees and fruit trees in the centre. 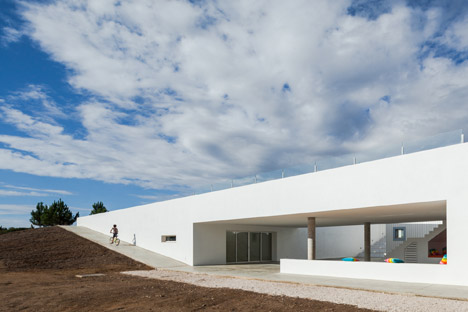 The firm refurbished and extended the original building to create a home for the owner, and embedded a separate slim structure into a slope to house six individual en suite bedrooms for renting out to guests. 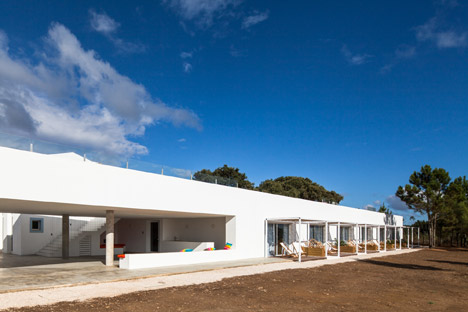 “The proposal seeks to establish a contrast dialogue between the existing and the new building, which sometimes merge with each other, creating a smooth transition between the past and the present,” said the studio, whose previous projects include a concrete-clad family home in northern Portugal. 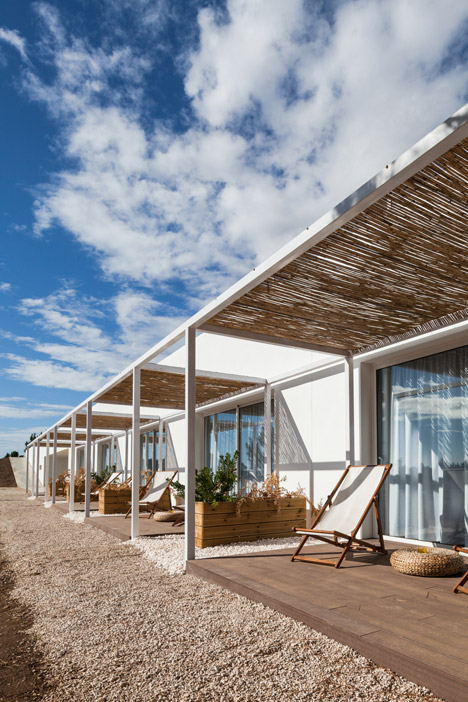 The two buildings are arranged in an L-shape, framing one corner of a central square of green lawn, while a swimming pool and decking fills the opposite corner. 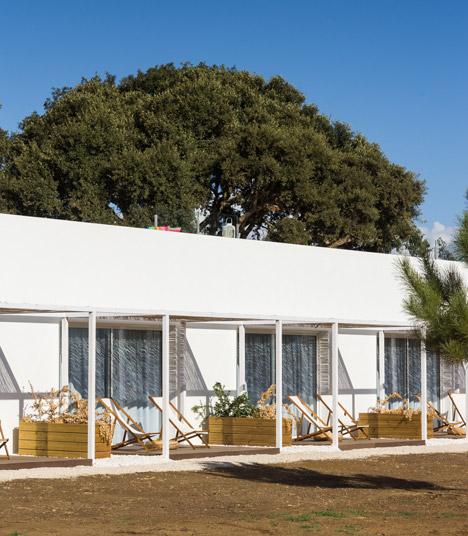 The new-build adapts to the slope of the ground, with rooms partially submerged in the earth, and only the white roof visible from the approach. 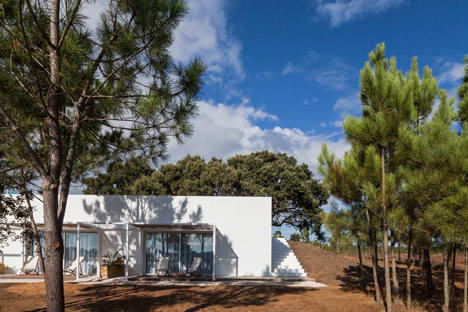 “At the level of arrival the building is almost imperceptible to the eye, only a long terrace with seating areas for contemplation of the surrounding nature is visible,” said the architects. 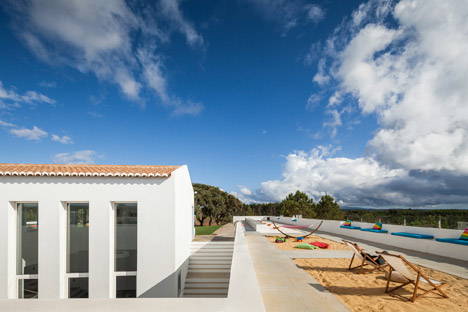 The roof of the guest accommodation, level with the lawn, has sand pits dug into it. Behind this, a narrow staircase descends in a crevass, providing access to the rooms on the lower level. 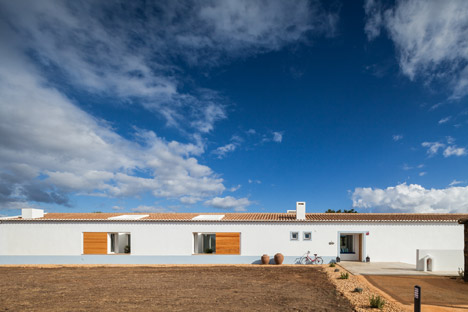 Wide glazed openings overlook the rural landscape. Each of the bedrooms has its own individual sun deck with a freestanding pergola that provides privacy and shades the interior space from direct sunlight. 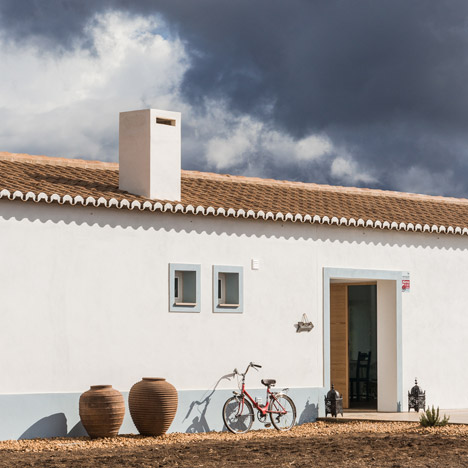 “The connection between the two volumes is developed through a central courtyard, the heart of the whole complex. It is from it that is organised the distribution and access to the different parts,” said the architects. 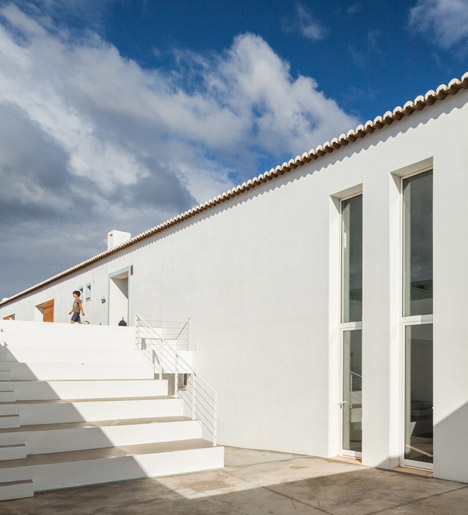 On the upper level the owner’s home stands above the ground with white-rendered walls and a terracotta tiled roof. 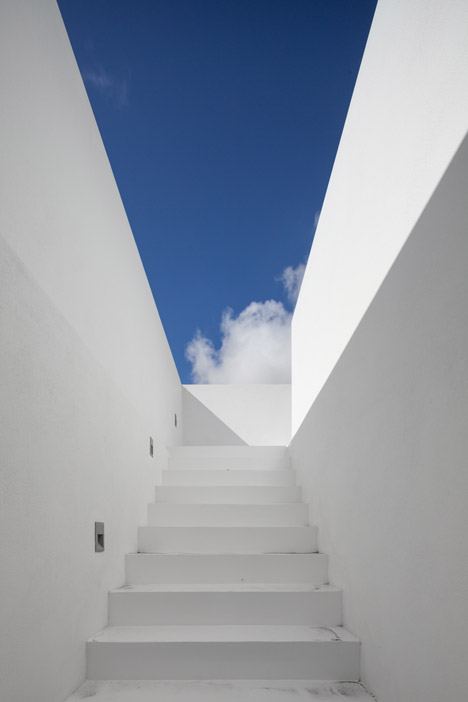 Living spaces face onto the shared gardens on the south-eastern facade, while the main entrance is positioned on the north-west facade, facing away from this communal area. This side of the building is sunken into the terrain and accessed via a flight of stairs. 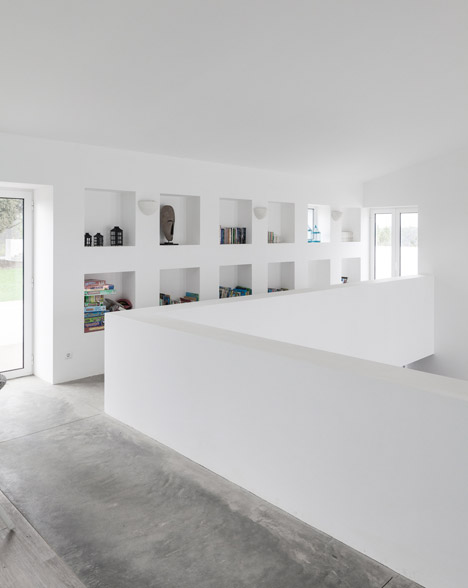 The interior of the house has concrete floors and white walls. A double-height living room with a hanging fireplace forms the focal point of the building. 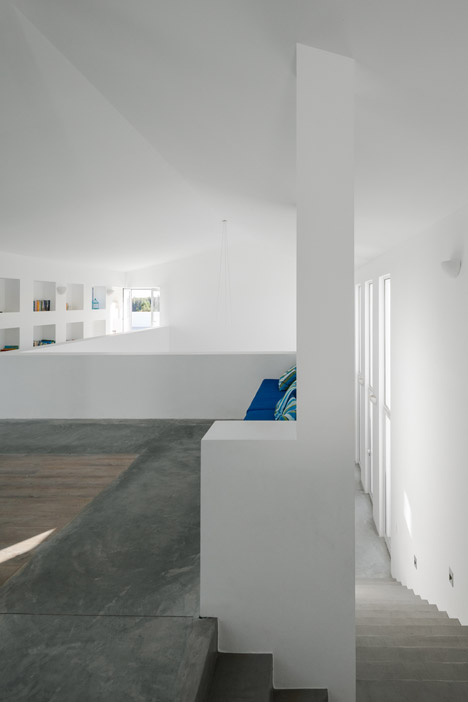 A bench to the rear of the fireplace has a backrest formed from the building’s sloping concrete wall. A narrow slice through the ceiling above lights the area. 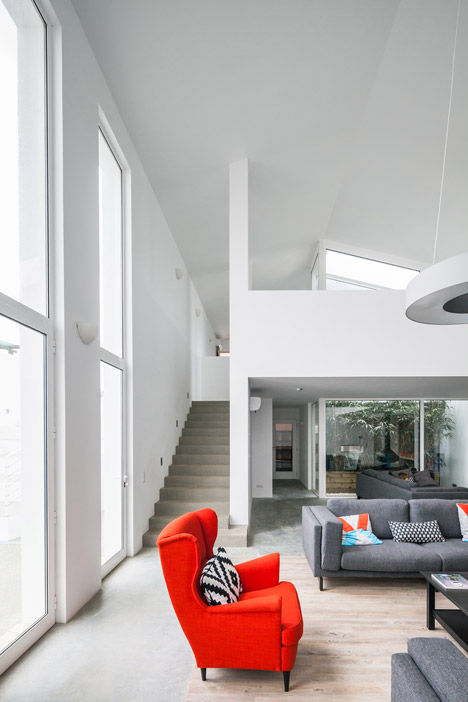 A small, glazed courtyard set into the living room provides further natural light and ventilation for the building. 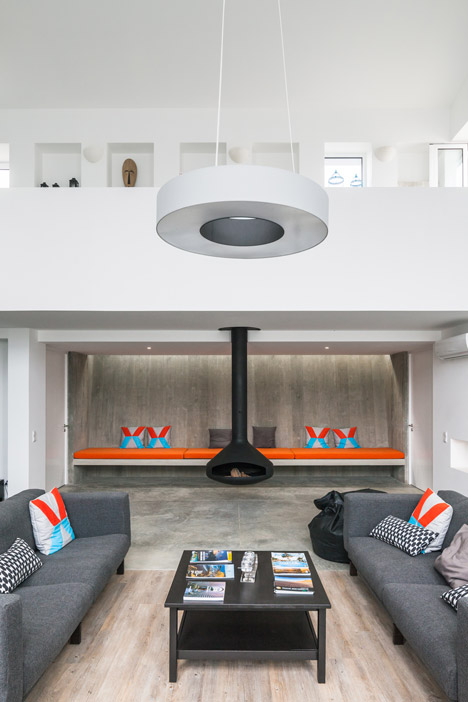 This double-height space creates an atrium that runs through the upper floor, around which a sitting room is arranged. This portion of the building also has a glazed facade to create sweeping views for residents. 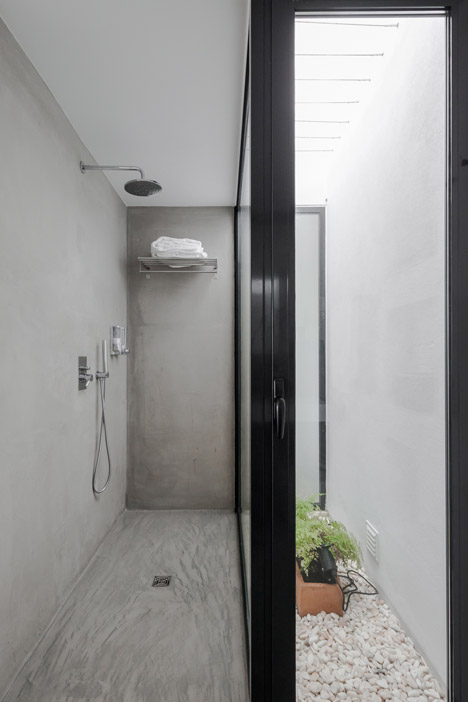 Positioned by the complex’s access road, a small caretaker’s cabin named XXS house measures just 8.4-metres by 8.4-metres. Dark timber planks are set above a small courtyard that gives the gate lodge aspects over the lane and marks the en
trance to the complex for visitors. 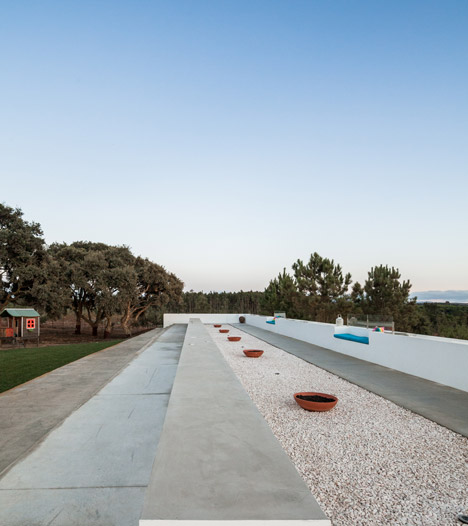 Images of the project were captured by architectural photographer Joao Morgado, who used a drone to produce aerial stills. 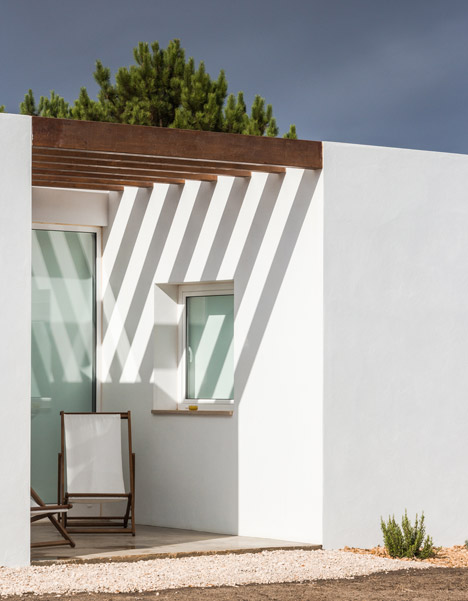 “I took some early photos during the construction and couldn’t immediately realise the relation between both volumes in a single photo, but it was so present when you were there,” Morgado told Dezeen. 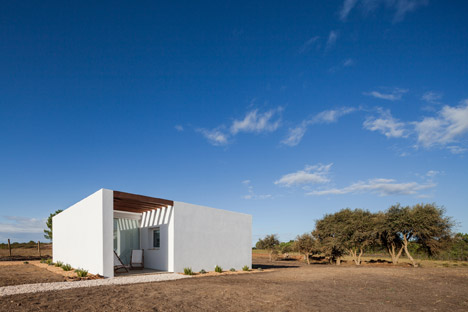 “That led me to suggest an aerial approach, where you can easily communicate the project and its surrounding environment,” he said. 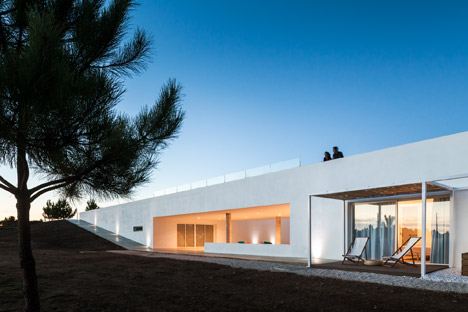 The Portuguese photographer, who has used drones since 2012 to capture architectural imagery, was awarded the ARCAID Architectural Photography Award for his aerial imagery of Alvaro Siza Vieira’s Leça Swimming Pools. 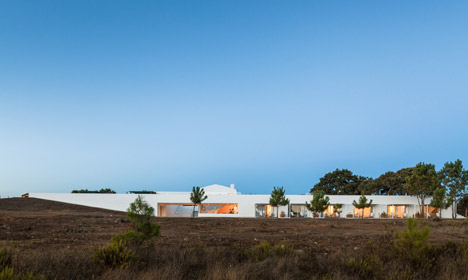 “The drone is a tool that extends my photography assignments to the air and allows me to communicate architecture from a different angle,” Morgado added.

Photography is by Joao Morgado.