This Sydney house by Farnan Findlay Architects has been clad in materials “that can take a beating” from the salty air and wind of its beachside location, including spotted gum timber that will turn grey over time . 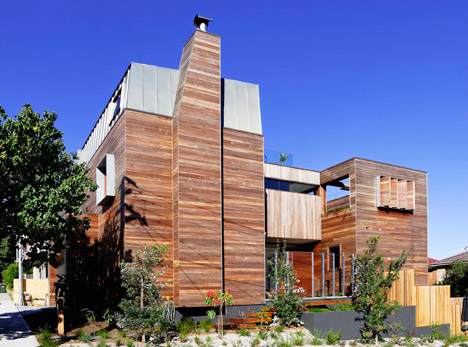 Clovelly House is located 50 metres from a beach in the Sydney suburb of the same name, so Victoria-based studio Farnan Findlay Architects clad it in spotted gum – a hardy local timber – and aluminium at roof level to withstand the elements. 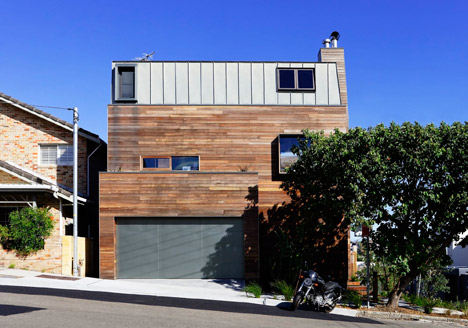 “The client’s brief was for a relaxed beach house, with materials that will weather and can take the punishment of living near the coast,” architect Michelle Findlay told Dezeen.

“Sand is a constant companion. The clients didn’t want a precious house.” 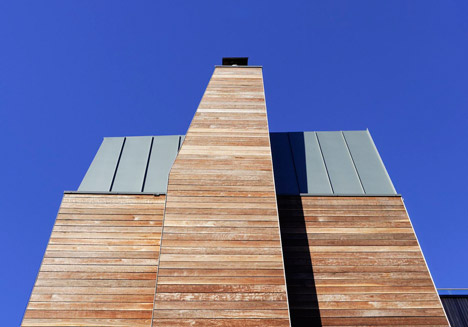 Farnan Findlay, whose other projects include a timber-clad home perched on rocky terrain, designed the four-storey house for a couple with two young children. It replaces a brick-veneer house on the site. 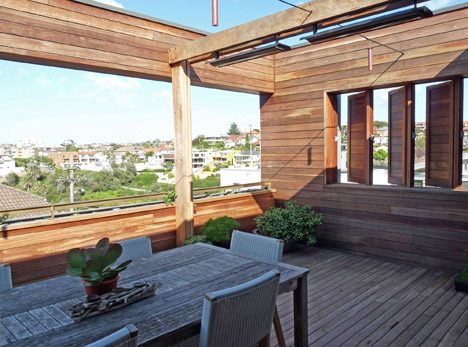 “The previous house was tired, had little sense of place, and didn’t perform well in summer or winter,” said Findlay, whose projects also include a timber-clad house perched on rocky terrain.

“Clovelly feels like a beach village even though it’s only 15 minutes from the city centre, so the architecture needed to reflect this. It had to be a beach house with a sense of belonging,” she said. 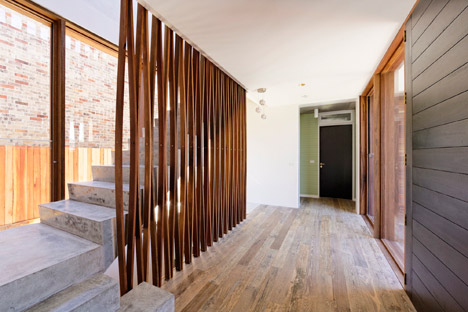 The house was designed with an H-shaped plan to overcome the constraints of the site, which is on a corner and faces south, attracting little direct sunlight.

It features two linked pavilions, which allowed for private set-backs, natural cross-ventilation, and north-facing areas that catch the sun. 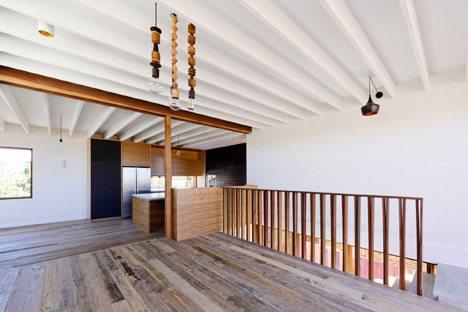 The basement level has space for a gym to be installed, and a secondary living room, while the ground floor accommodates a garage, two bedrooms, an entrance hall and a stairway enclosed by bowed lengths of spotted gum. 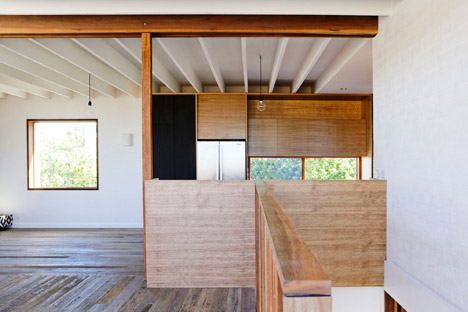 The kitchen, living area and dining room are on the first floor, and open on to a terrace at the back. 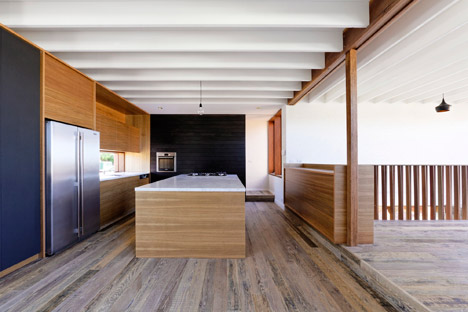 “An important element of the brief was the ability to live outside, so we added the oversized deck to maximise ocean views but still maintain privacy,” said Findlay.

“It is designed as an outdoor room, with flanked sides and a skeletal sense of enclosure for wind protection, as the ocean climate has many personalities.” 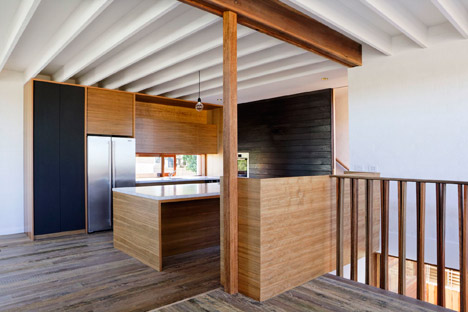 A separate staircase leads from the kitchen to the master bedroom and bathroom on the top floor, which is designed as a more reclusive space. 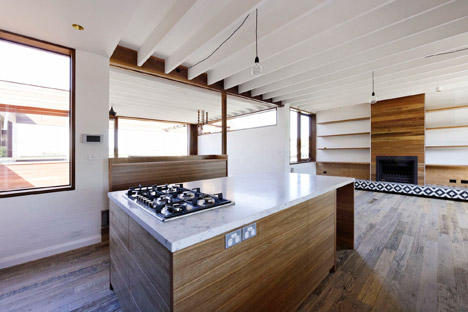 “The second staircase is tucked behind the kitchen, so you wouldn’t really know it’s there, however coming down, it offers views through the courtyard, the deck and beyond,” said Findlay.

“The house has been designed to allow for views through courtyards and adjacent spaces.” 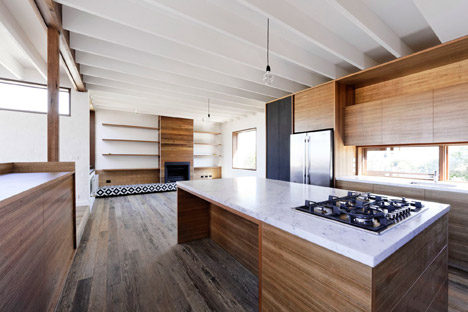 The house was constructed with a reverse brick veneer that lines the inside of the rooms. This helps to modulate temperatures by naturally soaking up heat and releasing it later as temperatures drop. 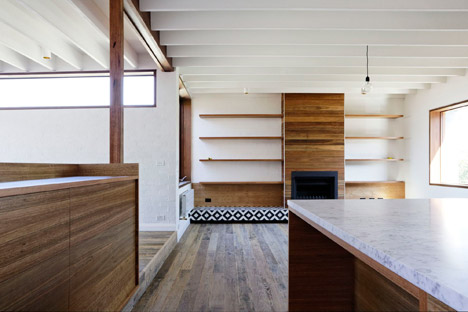 A range of woods were used together inside, including recycled oak for the flooring, spotted gum for the kitchen cabinets, and plywood for the walls and ceiling in the master bedroom. 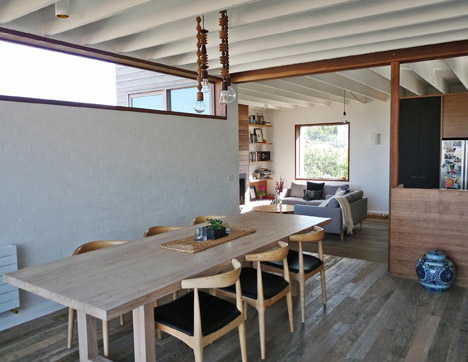 “People often shy away from having too much timber. We never do. We think people connect with it,” said Findlay.

“It’s a robust material with endless variations, and it can sit comfortably next to other species – in fact, it enhances them.” 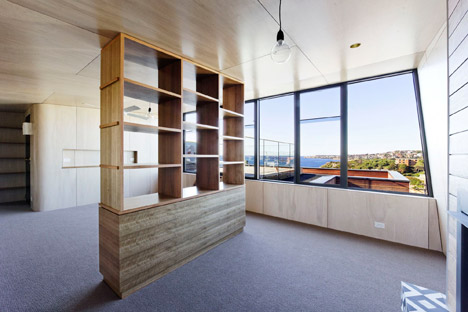 Over time, Findlay expects the timber will age the home gracefully as it turns grey, in combination with planters that have been added to the terrace, the entrance, and on top of the garage. 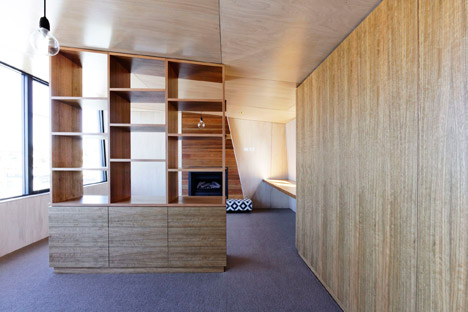 “There are lots of things still to grow, and the idea is that the house will soften as these elements flourish,” said Findlay. “We hope that as it greys and greens, it will look better in 20 years than it does today.” 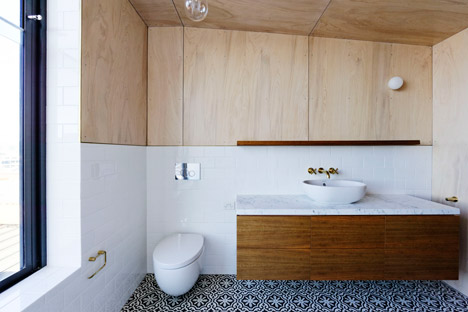 Photographs are by Kata Bayer, unless otherwise stated.