This year’s set up at the UK’s Goodwood car festival was based mostly on a blade by Modernist designer Enzo Mari.

The forty-metre-high Kodo sculpture was developed for the Goodwood Festival of Velocity, which took place in West Sussex from 25 to 28 June.

Its designer, sculptor Gerry Judah, has made installations for the occasion in the grounds of the Goodwood House stately property for 18 years running – each time for a different automobile brand. 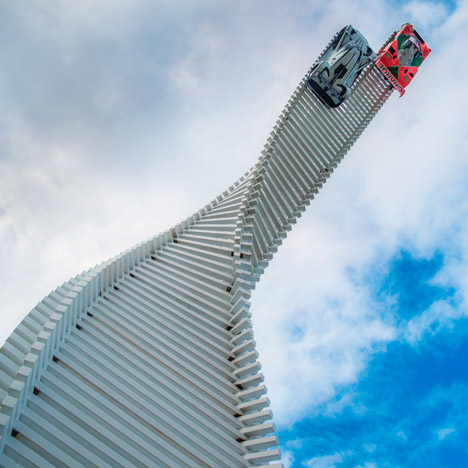 Preceding types have integrated a white knotted sculpture of a race track, a 28 metre-large steel model of the Jaguar E-Variety and a brilliant red looping structure.

“Every single year I like to think of one thing that is really diverse to something we have completed ahead of,” mentioned Judah. “Without a doubt, the hardest point about developing these sculptures is attempting to avoid any similarity, any conceptual connection, with anything I’ve carried out ahead of.”

This year’s sculpture was dedicated to Japanese brand Mazda in celebration of its MX-5 model’s 25th anniversary. 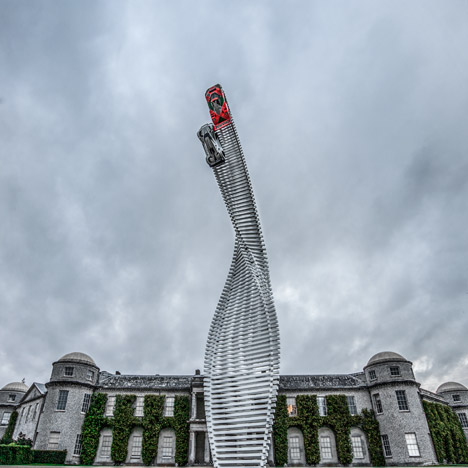 The company’s head of design and style, Ikuo Maeda, came up with the idea to base the shape of the structure on the Ameland paper knife, a letter opener developed by Enzo Mari for Italian brand Danese Milano in 1962.

Mari, an influential Italian artist and designer, created Modernist furnishings and homeware during the second half of the 20th century and has won the Italy’s prestigious Compasso d’Oro design and style award 4 instances. A self-assembly chair he designed in 1974 was put into manufacturing by Finnish brand Artek in 2010.

Jedah and Mazda’s european design director Kevin Rice worked collectively to turn Maeda’s thought into a sculpture that followed the automobile company’s Kodo style philosophy – described by Rice as “breathing life and motion into an object”. 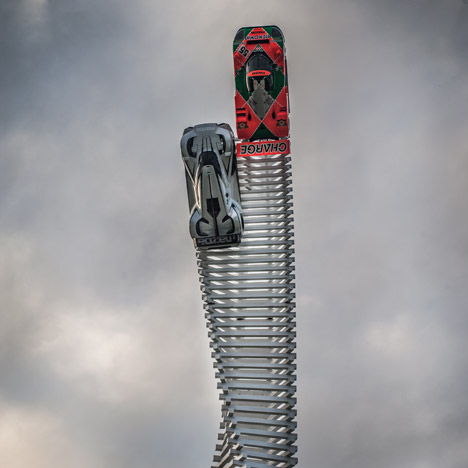 “I began to play with hundreds of concepts primarily based on our discussions to do with twisted metal types, trying out version soon after model till I came up with just a quite basic twist inspired by the Kodo philosophy,” stated Judah.

The sculpture was also developed to reflect the Japanese word “shinari”, which refers to the pent-up energy in tensile objects developed through twisting or bending, and is also title for a concept automobile released by Mazda in 2010.

The resulting form proved as well complicated to develop with sheet steel, which the sculptor has utilized for his earlier installations for the website. 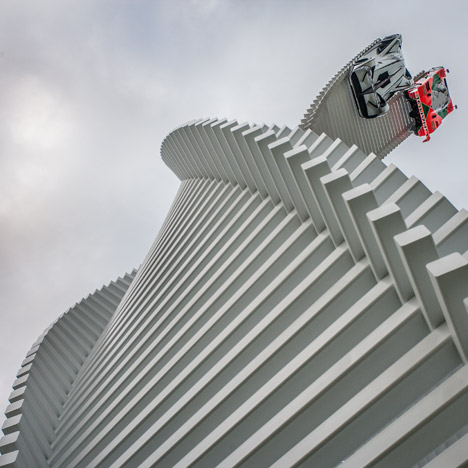 “The Mercedes, Lotus and Porsche sculptures have been monocoques in which the skin itself was the construction: flat sheets of steel welded together to generate a shape,” Judah stated. “But to do this piece in the very same way, we’d have to twist each and every personal steel plate, which would be impossibly complicated, time consuming and high-priced.”

Alternatively, the twisting kind was produced from a series of stacked overlapping bars, which are incrementally rotated to develop the warped shape of the tower.

“I had the idea of making the whole structure out of strips of wood,” mentioned Judah. “Sadly, making use of timber would have been phenomenally expensive and hugely heavy.” 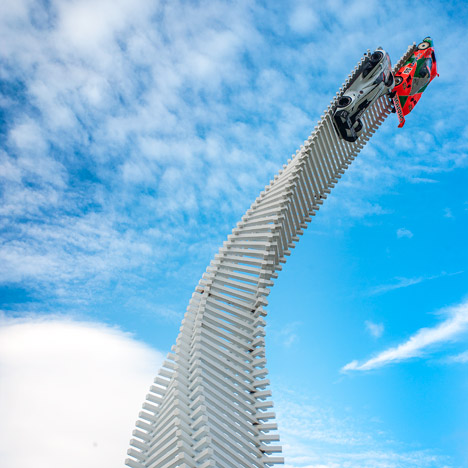 Originally made to display three automobiles, the finished construction supported two Mazda race vehicles mounted vertically at the leading: the 787B that raced in the early 1990s alongside the LM55 idea unveiled late 2014.

Judah worked with engineer Bruno Postle from Capita and Littlehampton Welding fabricators to complete the task, which remained in spot for the duration of the four-day event.