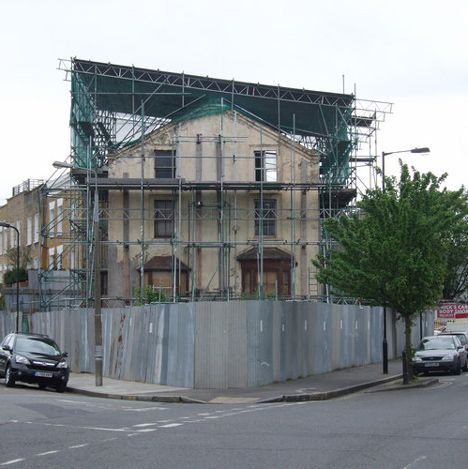 News: architect David Adjaye has submitted plans to overhaul a house in Hackney – made famous by its former resident who dug a warren of tunnels underneath the property – to create a home for artist couple Tim Noble and Sue Webster.

David Adjaye has designed a five-storey residence for a site in Hackney, the east London borough that already hosts one of the architect’s best-known private residential projects, the Dirty House.

The Mole House got its nickname from its former resident – William Lyttle also known as the “Mole Man”. Lyttle was evicted from the property in 2006 by Hackney Council “for his own safety” after it was discovered that he had dug a maze of tunnels underneath the building extending up to 20 metres under the surrounding streets and houses. 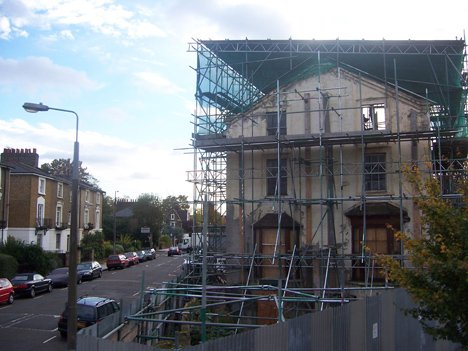 Following his eviction, almost 33 tons of debris were removed from the property, including a boat and three cars. Lyttle died in 2010 leaving the council with costs of over £400,000 after failing to pay for the repairs.

The house, which had also fallen into serious disrepair after years of neglect, was put on the market in 2011 for £500,000 but failed to sell. It was put up for auction the following year and sold for £1.1 million.

Its new owners, British contemporary artists Sue Webster and Tim Noble, told Another magazine that they wanted to preserve some of tunnels and use them as studios.

“It’s like a piece of our work — a piece of trash to recycle into something that will become a piece of history,” said Webster.

In his design statement to accompany the plans now submitted for approval to the local authority, Adjaye said that his clients wanted to preserve the building rather than use a previous permission that would allow them to demolish the existing building and replace it with two new ones.

“The clients wish to preserve the existing house and are interested in the accumulated layers of site history, both social and architectural,” said Adjaye in the statement. “The proposal will re-instate the house to a single family use.”

Dezeen Book of Interviews: David Adjaye features in our new book, which is on sale now

“The house will be extended to create open-plan living areas and a sunken landscaped garden around the perimeter using the existing excavated areas surrounding the building.”

The structure occupies a site on Mortimer Road in De Beauvoir, one of London’s designated conservation areas, meaning Adjaye’s design has to be sensitive to a number of restrictions that are intended to preserve the character of the area.

Gable walls will be rebuilt to the original height and the original pitched roof shape will be reinstated and covered in dark slate. The two-metre-tall boundary wall around the site will be reconstructed using reclaimed London stock bricks.

“A cross-shaped concrete structural element in the centre of the plan will help brace the external walls and support the new floor slabs of the building,” explained Adajye in the planning document. “This element will also divide each floor into four distinct areas.”

A front door at first floor level will be sheltered by a cantilevered concrete canopy that extends round three sides of the building. Retaining walls on the lower levels will also be made from concrete, which will be left with a raw finish, but the main bulk of the structure will be rebuilt using masonry and finished with a render that mimics the original, although the final colour is yet to be revealed.

“The house is to be extended at basement level to create an open-plan contemporary living, surrounded by a sunken landscaped garden which makes use of the existing excavated areas around the perimeter of the building,” said Adjaye.

This open-plan basement will contain the kitchen, dining room and living room as well as a library. The main access for this space will be provided by a lobby containing a spiral staircase. Two sets of double doors will open out onto sunken patio spaces with steps up to soft landscaped areas at street level.

The adopted architectural approach builds on the accumulated layers of site history, both architectural and social. The existing building is to be preserved and some of the haphazard interventions by the previous owner are to be integrated within a sunken garden surrounding the house. It is considered that these elements are all part of the history and contribute to the richness and layering of the site.

The historic appearance of the house to the street will be re-instated with the like for like replacement of the roof and the third floor lost due to fire damage followed by gradual erosion. A cantilevered band of canopy will brace the existing outer walls of the building as well as provide a contemporary feature element.

The design aims to preserve the authenticity of the existing building by making a clear distinction between which elements are old and original, and the new additions to the house.

A large bedroom with an en-suite bathroom and dressing room will occupy most of the ground floor, with a similar arrangement of the first and second floors. The ground floor will also have access to a new outdoor terrace.

The third floor will house a bar and cinema room. Large “lobby” areas on each floor create flexible space around the central staircase.

The Council has not yet reveale
d when it will make a decision on whether to approve or reject the scheme.

This Week, Homes For The Super Rich And Renzo’s Luxury Miami Tower Hit The Headlines