London studio Brinkworth and designer Michael Marriott have overhauled an previous pub inside and out to produce a second branch for chicken restaurant Bird. 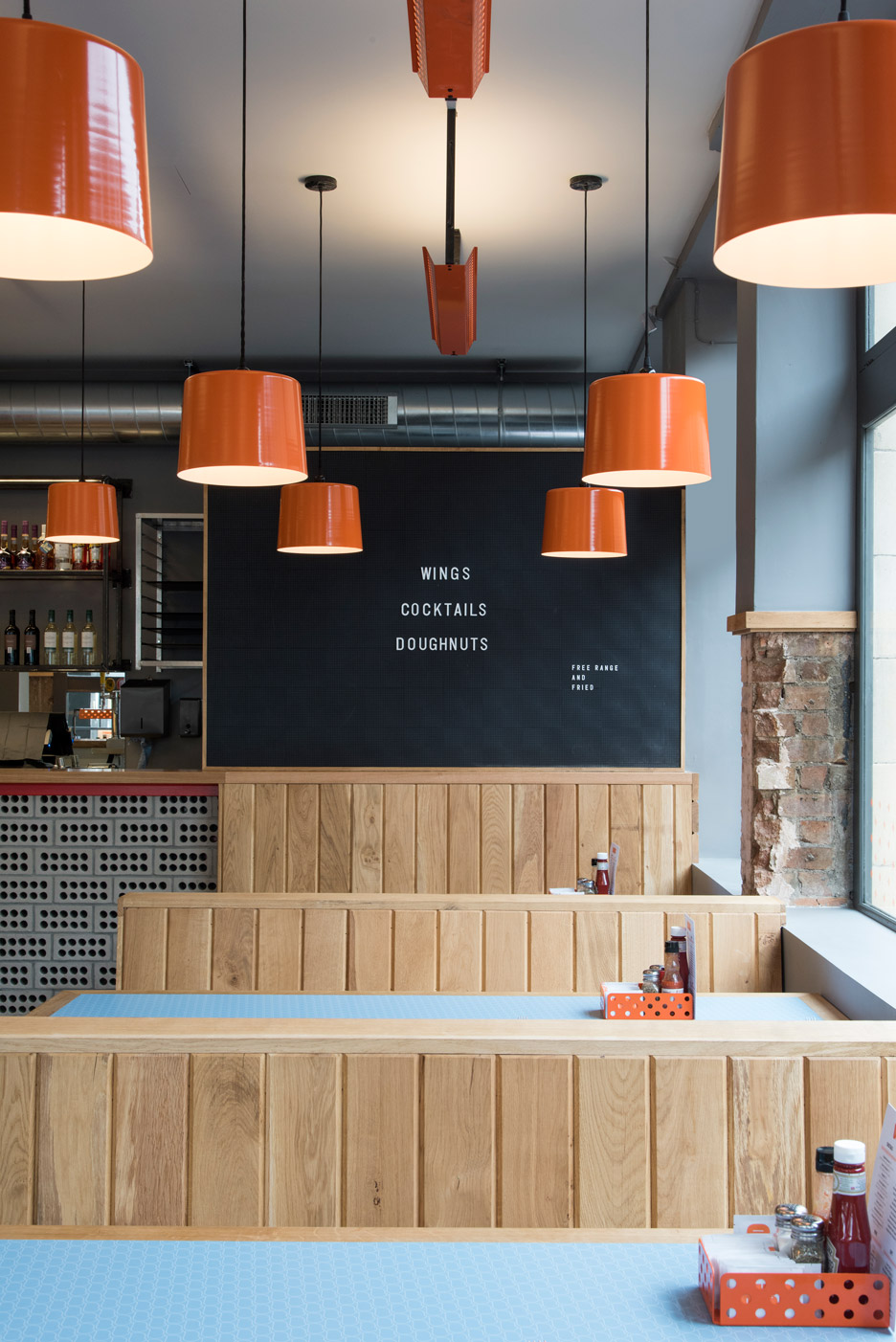 The architects took a equivalent technique to their style for the first Bird outpost in London’s Shoreditch when developing the new in close by Islington.

Celebrating the building’s 1930s architecture, they restored its original facade to reveal glazed bricks and signage. The interior was also stripped back to uncover brickwork. 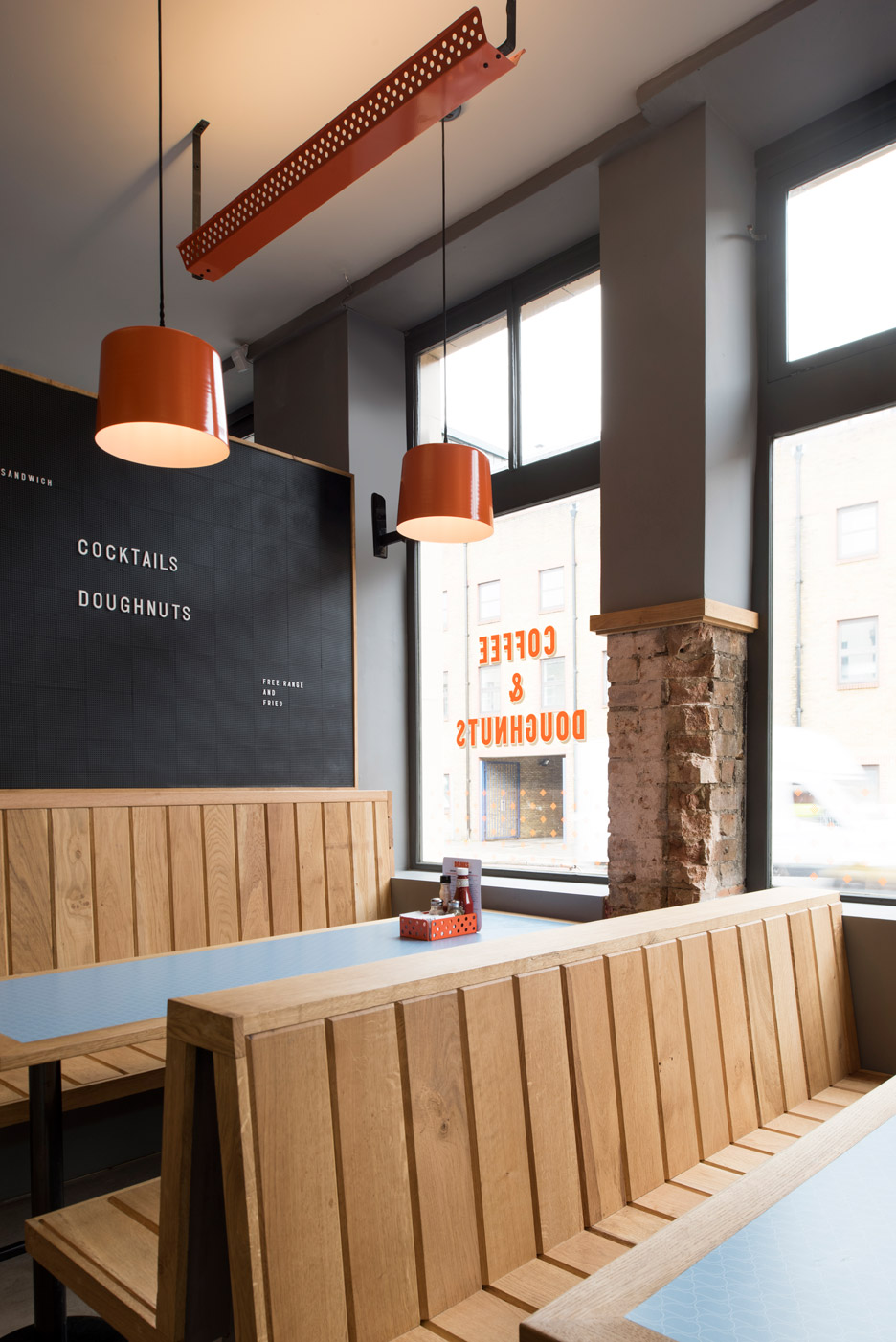 “The patchy, mismatched brick wall to the rear of the space was a completely contrasting backdrop to the vivid white neon Bird brand,” mentioned Marriott. “The brick adds a wealthy layer of texture and lifestyle to the venue.” Within, extreme colours and glowing neon signage are juxtaposed towards rough components. Perforated grey bricks form the primary bar, continuing the dotted patterns discovered all through the interior.

Blue-coloured tabletops are set between oak banquette seating and supply personal booths by the restaurant windows. Higher tables are arranged in a grid-like formation in the centre. 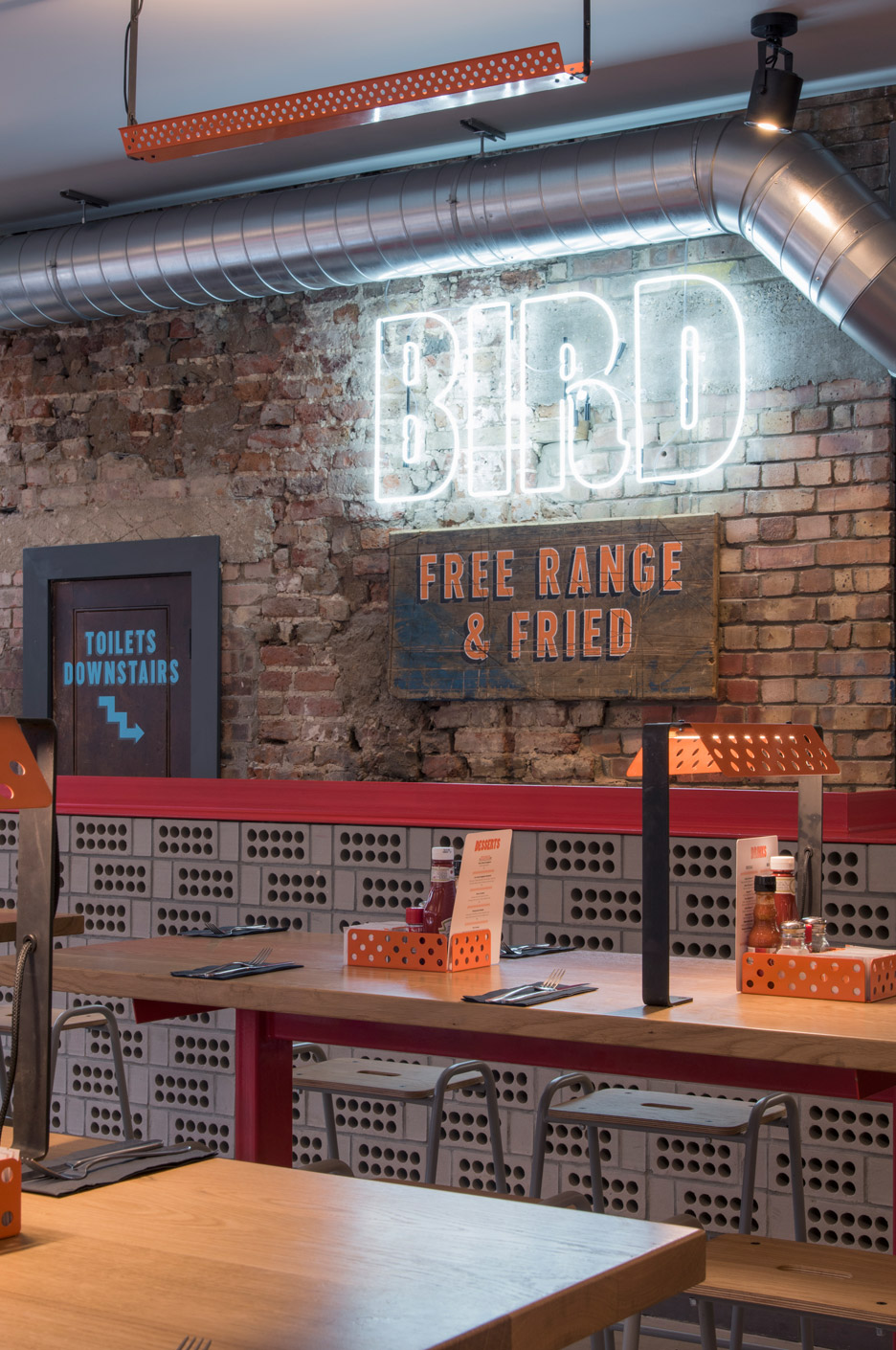 Florescent lighting tubes are encased inside of perforated orange metal shades to match smaller tabletop lamps. The furniture and lighting were designed by Marriott for the area.

“It was a wonderful method to work collectively with Michael on the merchandise development and prototyping for the new tables and lights,” explained Brinkworth director Sonny Cant. “We have employed the signature orange perforated steel, coupled with the new perforated brick, to generate a robust brand aesthetic across the total room”. 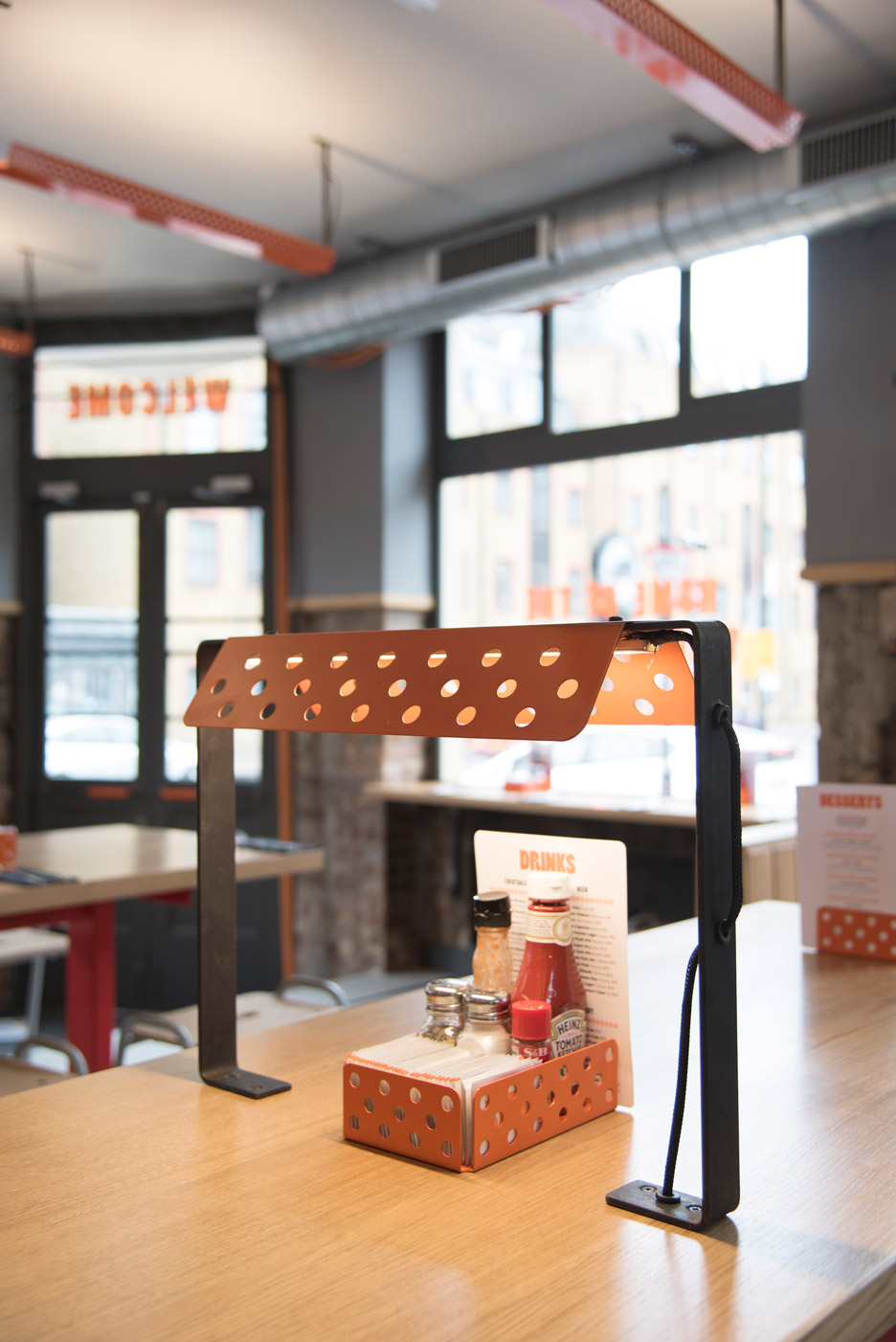 The restaurant is located on Holloway Street, close to the Emirates Stadium – the residence ground of Arsenal football club – so the architects had to ensure the venue could accommodate large crowds. Unique match-day menus and counter ordering had been incorporated to give quicker service. Stools can be removed to permit for far more standing room at the higher tables.

Bird Islington will be followed by a third website in the chain, planned to open Camden towards the finish of 2015. 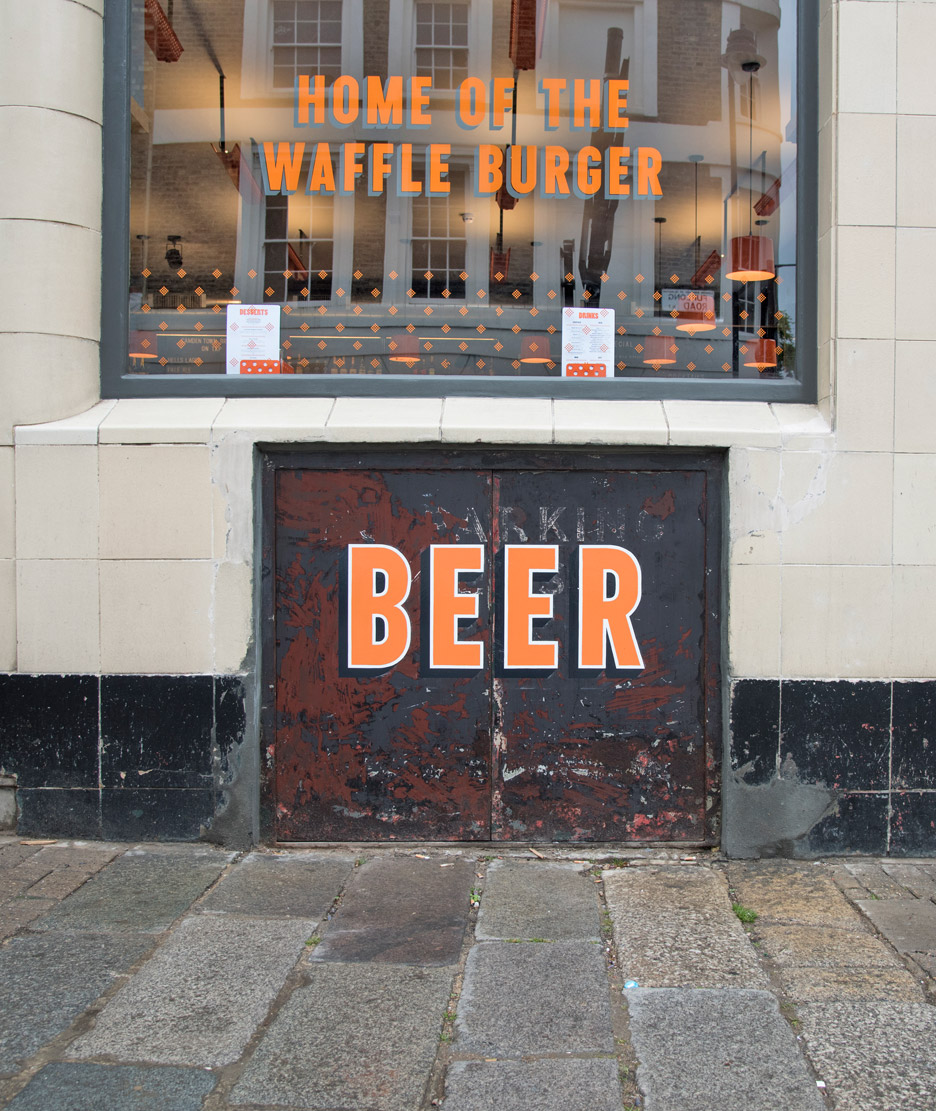 Photography is by Louise Melchior.