The Västerås Travel Center by Bjarke Ingel’s firm Large will deliver with each other trains, buses, taxis and bicycles as component of an ambitious redevelopment program for the city’s principal railway station .

Already below development, the 12,000-square-metre transport centre developed by the Danish architecture studio will occupy a website in the middle of Västerås, central Sweden, around the present train station.

Element of a wider redevelopment scheme known as 3B – Develop Away the Barriers, the venture aims to make the station really feel much more integrated into the surrounding neighbourhoods.

It will connect the places on both side of the tracks, which currently divide the city, under a thin golden roof with a hollow centre.

Beneath this shelter, bus stops and cycle paths will be mixed with pedestrian areas organized all around bridges at both end of the station.

“Like a continuous thin sheet, the roof is gently lifted at its 4 corners, wrapping the city’s vehicular infrastructure in multiple layers of public program and urban spaces,” mentioned a statement from Massive.

Two sweeping platforms with glass balustrades will rise up to kind elevated plazas that merge into bridges over the railway tracks, supplying new access routes to the train platforms.

Additional ramps will supply cycle paths up from street level, and locations underneath the plazas will be enclosed with glazed walls to create a transparent boundary for the station.

These glazed sections will merge with the double-height curving glass structure that occupies the central component of every single bridge, supplying two storeys of indoor space for cafes, eating places and outlets. 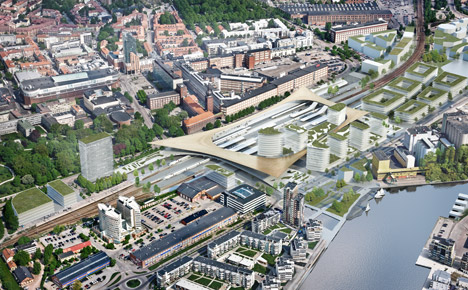 “The present rail station divides Västerås – with train tracks bisecting neighbourhoods of the city it serves rather than linking them collectively,” explained Huge.

“Rather than turning into an infrastructural node for public transportation, the new Västerås Travel Center is shaped by the flow of individuals and public existence, turning infrastructural necessities into options for social interaction.” 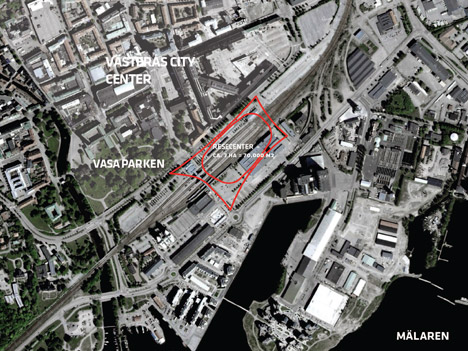 The transport centre is one of several huge urban tasks Big is at present operating on in Europe and the US. The firm has lately been slated to replace Foster + Partners on the final tower for New York’s Globe Trade Centre web site, and is also operating with British designer Thomas Heatherwick on Google’s new headquarters in California.

Tasks in Europe contain the Amager Bakke Waste-to-Power Plant in Copenhagen, which functions a ski slope on its roof and a smoke-ring-blowing chimney.