A piece of the historic Covent Garden market appears to have broken free of its stone base, with its top half levitating in the air, in the latest installation by London designer Alex Chinneck.

Take My Lightning but Don’t Steal My Thunder by Alex Chinneck is a precise replica of a section of the 184-year-old market building in London’s Covent Garden that has been made to look as if its upper portion has broken away from its stone base to float in mid air. 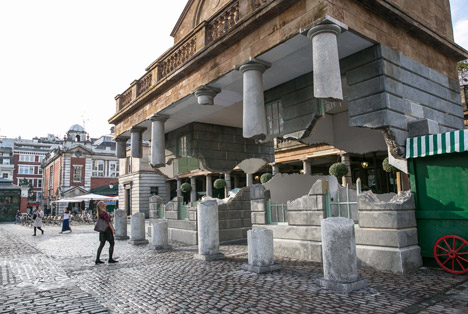 Chinneck is best known for creating architectural optical illusions, including a London building that seemed to have been turned upside down, a house in Margate whose facade appeared to be slipping off and a wall that melted in the sun.

He is the latest in a line of designers and artists commissioned to create public works in Covent Garden’s Piazza including Jeff Koons, Damien Hirst and Paul Cocksedge. He wanted to create a piece that referenced the “performance culture” of the area, which is home to the Royal Opera House as well as a number of public buskers.

“My objective was to create an accessible artwork that makes a harmonious but breath-taking contribution to its historic surroundings, leaving a lasting and positive impression upon the cultural landscape of Covent Garden and in the minds of its many visitors,” said Chinneck. 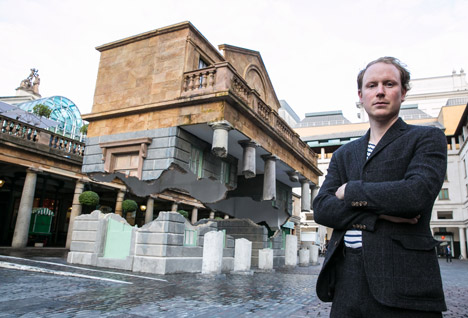 “The hovering building introduces contemporary art to traditional architecture, performing a magic trick of spectacular scale to present the everyday world in an extraordinary way.”

Built from a steel frame and filcor, a type of expanded polystyrene, the 12-metre-long structure took 500 hours to shape using digital carving techniques and was painted to replicate the appearance of the existing building on the site.

A four-tonne counterweight enables the suspension of the top half of the fake building.

Take My Lightning but Don’t Steal My Thunder will be on display in Covent Garden’s East Piazza until 24 October.