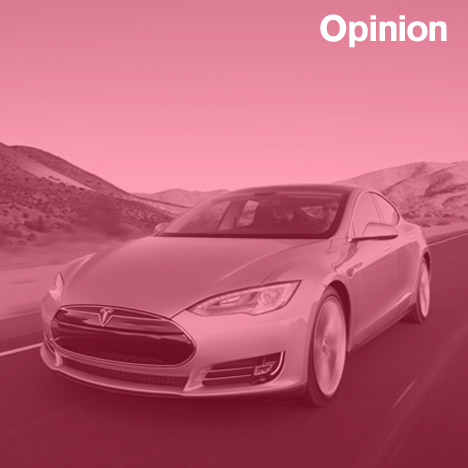 Opinion: with the petrol heads stuck firmly in rut, there’s an opportunity for designers to do something different with the new wave of electric cars. Elon Musk’s Tesla is among those leading the way, says Lucas Verweij.

The Paris Motor Show took place last week, and once again it showed us that cars are dull, ugly and predictable. Thirty years of safety and environmental regulations have eliminated all design freedom. The designers are not to be envied.

But while the petrol heads have ended up in a rut, there is plenty of progress from mobility start-ups who are developing electric cars and car-sharing concepts. We should expect cars from Silicon Valley to look different. But how exactly? After a century of car design, can a totally different visual language emerge?

It’s easy to believe that cars have reached their full potential technically, stylistically and culturally. A modern car can circle the earth five times and reach maximum speed easily, yet it rarely needs a visit to the garage. Petrol consumption in engines has halved over the past half century, and driving has become exponentially safer. In the past you hit a lamp post and died; now your car can overturn and you can walk away unharmed. Moreover, today’s car is more comfortable and easier to handle.

Experimentation within the auto industry has ceased

All those achievements are down to designers who have done their best. Cage frames, airbags, anti-lock braking systems, crumple zones, head supports and weight reductions have made cars smarter, cheaper and more economical. What a pity that aesthetics have deteriorated along the way, for today’s cars are ugly and incredibly boring.

You cannot blame designers, because the margins within which they have to design have become so narrow that there is scarcely any room for change. As sales have become increasingly stagnant, experimentation within the auto industry has ceased – in sixty years the automobile has transformed from wild, expressive and visionary to obedient, regressive and compliant.

All major car manufacturers make five incontestable models. Attempts to launch other concepts often flop, as we saw with the Fiat Multipla, Renault Avantime and Subaru SVX. Producers keep faith in what sells well. Cars resemble one another because there is so little technical variation, with most of them featuring a monocoque structure, front-wheel drive, and a water-cooled engine at the front. The wind tunnel does the rest in creating uniform shapes. Details don’t reveal much variation either. Everything from a cheap Fiat to a pricey Mercedes features the same connection between rear door and floor. All wheels are roughly the same size and clearly visible. The aesthetic values that apply to cars have become more uniform.

What great vision there is today comes from mobility start-ups, whose motto may as well be “the car is dead, long live the car”. New car manufacturers who have never produced a combustible engine are turning the automobile world upside down. In the world of Silicon Valley it seems that consumers don’t necessarily even need to own a car. Apps like SnappCar and Uber already enable different kinds of car use. Newer car sharing initiatives like DriveNow and Car2Go are growing rapidly and car-poolers can team up through BlaBlaCar, Avego and PickupPal.

Automobile manufacturers like Tesla and Byd make nothing but electric cars and have a totally different company culture. Likewise, motorbike manufacturers like Zero and Brammo don’t use any petrol whatsoever, and so have a much clearer focus. These companies resemble computer firms more than car factories. An electric vehicle contains up to a million lines of program, so it’s no surprise that newcomers all operate out of Silicon Valley, since proximity to developers is vital. Apple, for example, is just around the corner from Tesla.

Electric power is a major advancement for the quality of life in cities. Noise, particulates, carbon emissions and exhaust smells are all reduced, and centralised generation of energy is much cleaner. Politicians – sometimes begrudgingly – agree, which is why electric cars are sometimes allowed on bus lanes and have designated parking spaces and their owners pay hardly any tax. A “full tank” costs just five euros.

On top of that, drivers make a better impression, especially morally. I drive an electric motorcycle myself and I notice that it’s also a more social vehicle. Asking for directions or pulling away doesn’t cause a stink or lots of noise or intimidate anybody. Yet although you now can step out of an electric car and hold your head up high outside a hip cafe, it’s important that everybody can recognise what type of car it is – that it is not of the old guard.

There are therefore plenty of reasons to give electric cars a distinct appearance. But the challenge is not that simple. A new design repertoire cannot be invented overnight. So what opportunities are there to make these cars stand out?

Two technical differences offer pointers. Electric motors require hardly any cooling, which means that they do not need ventilation openings. Both BMW i3 and Renault have already detailed cars with a distinctly closed grille. In addition, electric motors are quiet, which is why Renault has added new sounds for parking and slow driving.

If technology doesn’t present much in the way of opportunity, then there is always ideology. Society believes in electric vehicles and wants this to be the future, so a futurist look is appropriate. Futurist style characteristics in the world of cars are the droplet-shaped bodywork, closed rear-wheel arches, and a smoothly curved back, all of which we see in the Honda Insight, and Volkswagen XL1. Fifteen years ago there was the General Motors Ev1, a radically different and futurist design. But the petrol heads in the GM boardroom got scared, and the popular car died a mysterious early death.

The danger with futurism in design, however, is that it can frighten off customers. The design language is too far ahead of consumer acceptance. Futuristic cars – even from star designers – have flopped remarkably often. Just look at the Pininfarina svx, the Citroën SM, DeLorean DMC12, Tucker Torpedo and the above-mentioned Ev1.

That’s why the Tesla-S looks only moderately progressive. “A car like this needs to have a conventional appeal as well”, says Tesla’s design chief Franz von Holzhausen. The bodywork shape is deliberately conservative. They don’t hold back, however, when it comes to materials (97 per cent aluminium), interiors or coatings. A second back seat provides space for two children seated “the other way round” – a design that had never been done before.

In their detailing, too, Tesla cars are decidedly futuristic. The paintwork is coated twice to make it “look like glass”. Interior functions are operated on a big touchscreen, and door handles appear only after the car has been unlocked, just like in Star Wars.

Next year a model with two wing-doors – the ultimate futurist device – comes on the market. Tesla, the most important innovator, is not holding back. And that’
s good news. The future looks bright. Because believe me, very soon the automobile industry will be just as expressive, visionary and wild as it once was. Only this time it will be electric.

Lucas Verweij has been teaching at schools of design and architecture around Europe for over 20 years. He was director of a master’s programme in architecture and initiated a masters course in design. He is currently professor at the Kunsthochschile Weißensee and teaches master’s students at Design Academy Eindhoven. He has initiated and moderated various seminars devoted to designing design education.