This artists’ house in Dalston has been up to date with a yellow-framed kitchen extension in the back garden and a traditional glass and timber “shopfront”.

London architecture studio PriceGore was asked to renovate and lengthen the house in Dalston, east London, which the two artist clientele had obtained in a derelict problem 6 many years prior. 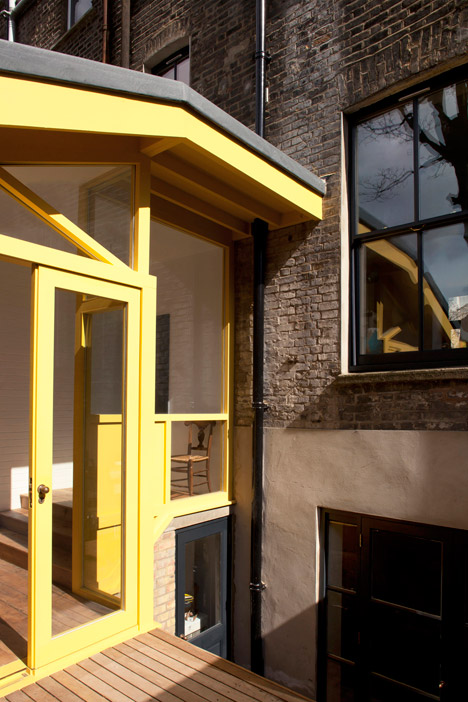 The clients had renovated the two upper floors of the home themselves and have been employing the ground floor as a studio. But more significant functions have been needed to convert the windowless basement into further studio area and to create a new kitchen.

The architects additional a glazed entrance to the street-facing facade of the property to enhance natural light in the studio. They also added the yellow-framed extension in the back garden of the house to provide a new kitchen, and produced new openings in the basement. 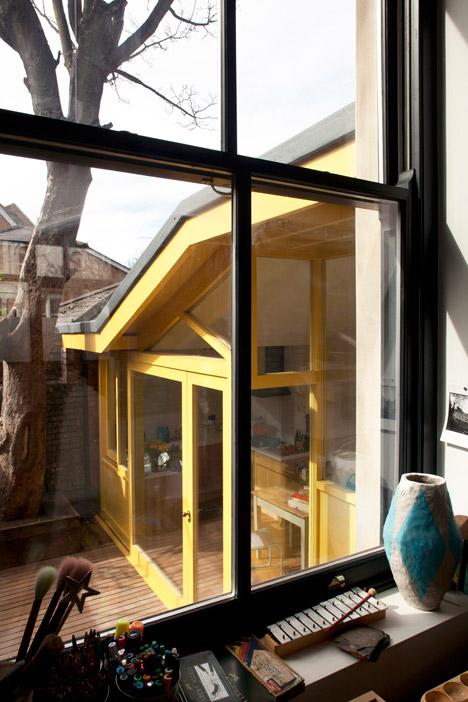 “The project is conceived as a pair of complementary interventions, every single comprising a staircase, a glazed display, and a tree,” explained practice co-founders Dingle Price and Alex Gore. 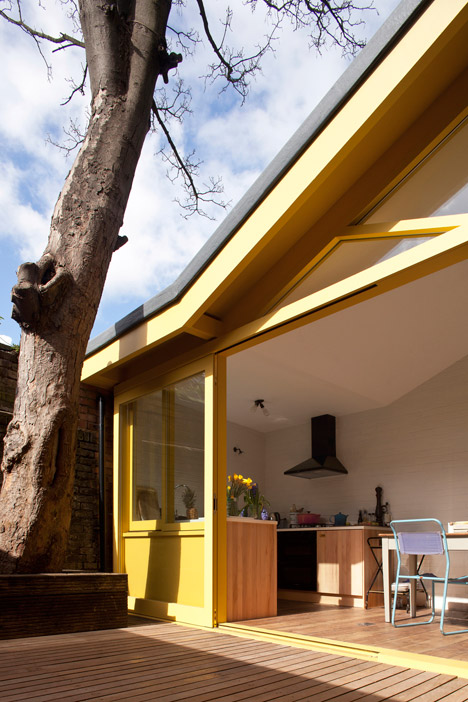 The “shopfront” – so referred to as simply because it tends to make the interior visible from the street – characteristics large windows and double doors supported by a Meranti hardwood frame.

Dilapidated outbuildings and undergrowth were eliminated from the back backyard to make way for the kitchen extension, which also characteristics huge areas of glazing framed by Meranti wood. This framework was painted yellow to distinguish the new structure from the original brick building. 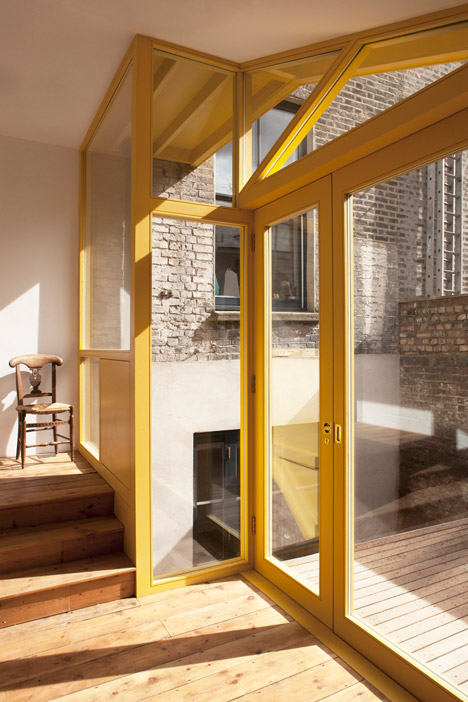 The structure occupies component of the backyard, which sits halfway among the ground floor and the basement.

Outdated pine boards were utilised for the kitchen floor, while cabinetry is created from reclaimed maple wood that after lined the floor of a college gymnasium – a materials presently owned by the client. 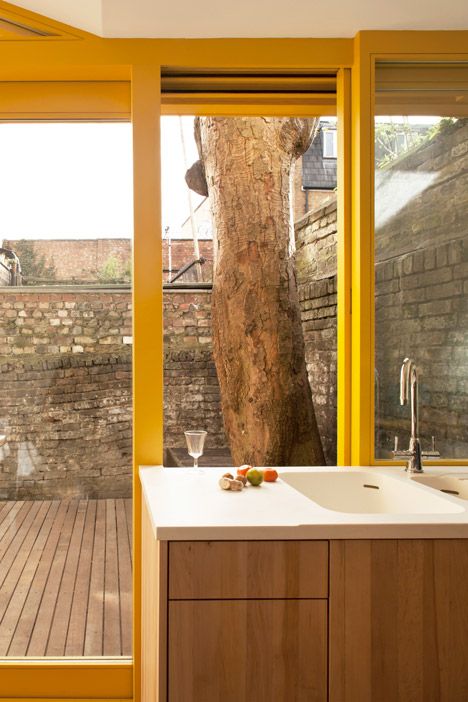 “The choice to make the display from painted timber is in relation to the historic timber windows of the home,” Price advised Dezeen.

“Though different in physical appearance, there is a want for an underlying familiarity which serves to integrate the project in its context. The reclaimed resources are also a technique of sustainability.” 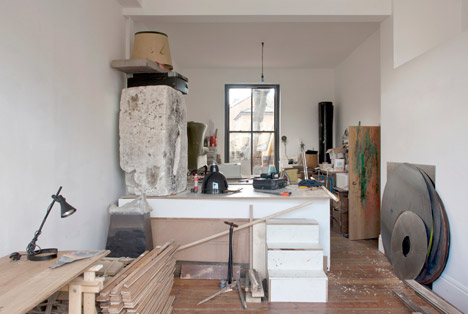 Brick planters for a pair of trees had been built in both the front and back gardens, which are covered in reclaimed cobbles and recycled teak decking respectively.

“The notion of making use of brick and cobbles was to give back to the front of the house some of the grain and tactility that had been misplaced by the earlier coating of render,” said Price. 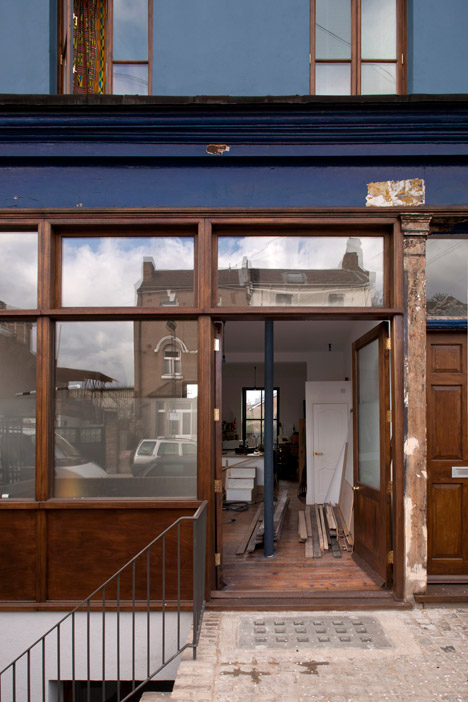 A window was extra to the lightless basement level and an entrance to the backyard was tucked beneath the stairs of the new kitchen.

PriceGore previously went by the title Dingle Price tag, but has lately rebranded itself to acknowledge the addition of new partner Alex Gore. Below its former name, the firm completed another undertaking for an artist client – a conversion of a south London warehouse into a painting studio.

Other artists’ studios lately completed in east London include a photography studio with a three-metre-substantial door by Cassion Castle, and an aluminium studio for textile designer Laura Hamilton by Edgley Layout, which is tucked behind a row of semi-detached houses.

Photography is by Ioana Marinescu.

Designs Of The Year 2015 Nominees Announced 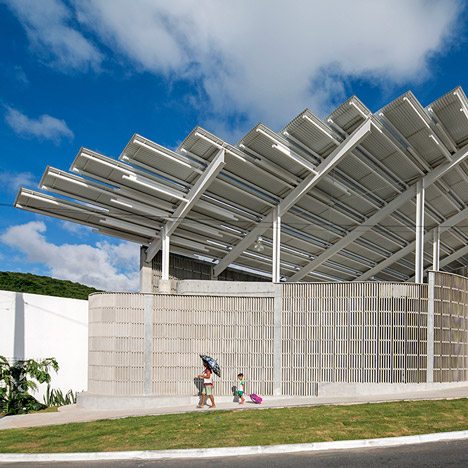