American architects Elizabeth Diller and Ricardo Scofidio have created an installation inside the Fondation Cartier in Paris by Jean Nouvel, adding a “leak” in the ceiling with drops of water that trigger a series of reactions across two gallery spaces . 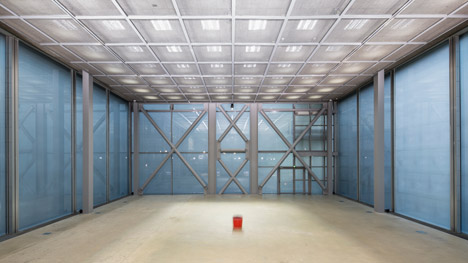 Completed in 1994 and designed by French architect Jean Nouvel, the glass and steel Fondation Cartier building on Boulevard Raspail caused controversy when it opened as its transparent walls appeared to preclude the hanging of artwork. Diller and Scofidio, who together with Charles Renfro run the firm that is responsible for projects including New York’s High Line and the Broad Museum in Los Angeles, were already familiar with the space having been involved in a number of exhibitions since the opening of the the building. 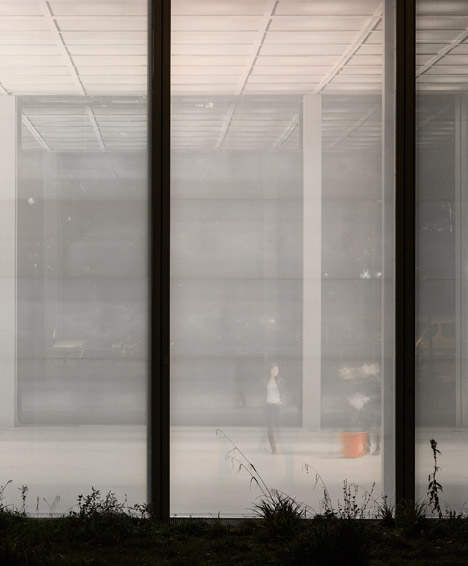 They wanted to pay tribute to the original architecture of the galleries by using it as a raw material for their work. 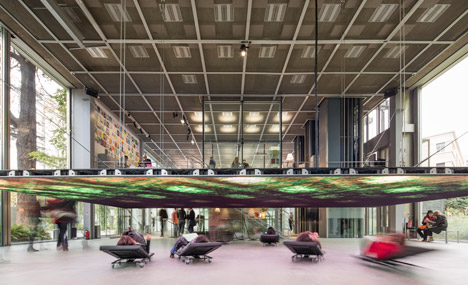 “One of the obvious attributes is this transparency and how it creates a provocation to everyone using it. So our first instinct was to create a problem for that transparency and to flirt with it in a different way.”

The glass walls of the larger gallery space to the left of the main entrance are coated with a liquid crystal film that fades in and out of transparency as an electric current passes through it. 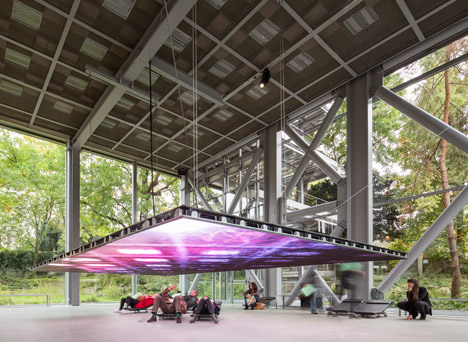 “Liquid crystal film has been around probably for about twenty years or more. Generally it goes off and on. What makes this film unique is that you can control it,” explained Scofidio. “You can actually dial it down so it gradually changes to transparent, to translucent.”

“We tried to make it as invisible as possible,” added Diller. A red plastic bucket on wheels appears to be the only occupant of the room. Inside the bucket is a camera and sensors that guide its movements around the space to collect drops of water that fall from the ceiling, as if there is a leak. As each drop falls, a loud noise sounds.

“We came up with this kind of mischievous thing, this leak. Just a leak, but it’s a very smart leak with a very smart bucket that captures it,” said Diller. “The [idea of this] empty space with just one very kind of banal object that is actually doing something very smart – it grew out of that. And then we thought: okay what do we do with the sound of that drop? How do we relate it to the next space?” The smaller gallery to the right of the main entrance is occupied by a large screen that hangs parallel to the floor like a suspended ceiling, but just one metre above ground level.

To view the images being shown, visitors are invited to lie down on black loungers supported on wheels and propel themselves underneath the screen or use curved mirrors controlled using long black metal handles. Once underneath, the moving image they see is a blown up version of the video footage captured by the camera in the bucket moving around in the space opposite. As each drop falls into the bucket, the surface of the water ripples, with the effect becoming amplified on the screen.

The sounds initially generated to accompany the drops of water also become distorted in the second room and choral voices are added to the acoustic arrangement, which was devised by American composer David Lang. 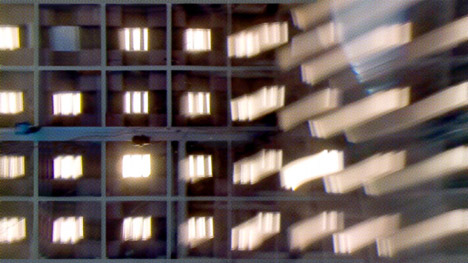 “The notion of, in one space – in the big space – doing something very tiny, almost invisible, almost nothing, and then taking that to the other space, makes it into the comic here and the sublime over there,” said Diller.

“It’s doing something that’s very ethereal in a way, but also grotesque, with that very large image and that drop becoming very forceful and the compression of watching with that very low floor-to-ceiling height.” 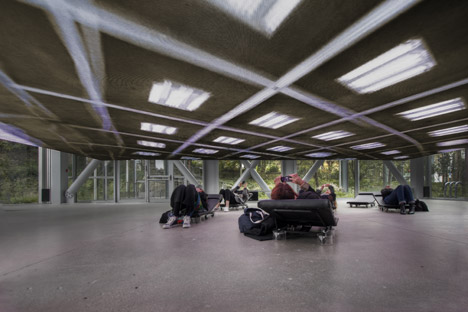 Diller and Scofidio were initially best known for their installation work, becoming the focus of worldwide attention in 2002 with the Blur Building – a suspended platform over a Swiss lake that was shrouded in a “fog” of fine water mist.

Since then they have been involved with increasingly high-profile architecture projects, with their firm becoming Diller Scofidio + Renfro in 2004. 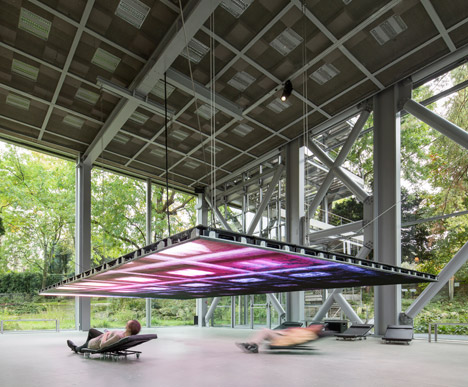 “We started by doing
installations in galleries and it’s only now that we are the other side of the wall,” said Scofidio.

“We never said ‘one day we’ll be doing this’ or ‘one day we’ll have a big office’. It was never our intention. We were simply doing things that interested us and using the way that architects conceive the world to investigate conditions which we generally don’t pay a lot of attention to.”