A Japanese inventor has produced the “world’s smallest electrical vehicle” – an aluminium board with wheels that carries a passenger like a Segway and fits into a backpack (+ movie). 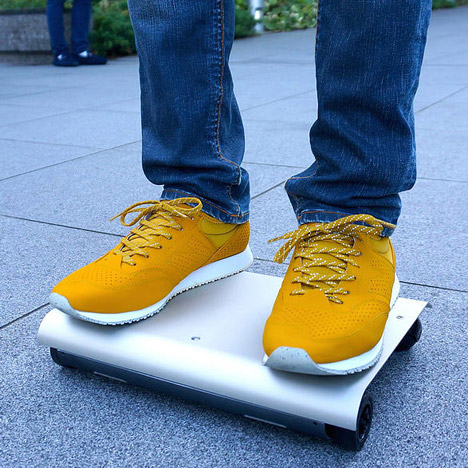 The light-weight aluminium board is approximately the dimension of a laptop and can carry loads of up to 120 kilograms.

Offered as an indoor and outdoor edition, the 4-wheeled WalkCar is powered by a lithium battery and can attain speeds up to ten kilometres (6.2 miles) per hour.

The gadget performs similarly to the bulkier two-wheeled Segway device, with the consumer shifting their fat to adjust path.

Stepping onto the board begins it automatically and disembarking right away stops the movement. The gadget is small and light enough to choose up and pack away into a rucksack when needed, comparable to Impossible Technology’s folding electrical bike.

“WalkCar is the world’s smallest electric vehicle that can be mobile and put in a bag,” said Cocoa Motors. “Just turn the body in the route you want to go, you can move freely.”

According to Cocoa Motors, 3 hrs of charging offers adequate electrical power for travelling distances of up to 12 kilometres (7.four miles).

Saito came up with the idea even though studying engineering. He set up Tokyo-based Cocoa Motors in 2013 and has considering that created the idea into a operating prototype.

“I thought: ‘What if we could just carry our transportation in our bags, would not that indicate we’d constantly have our transportation with us to trip on?’ And my buddy asked me to make one, given that I was doing my masters in engineering exclusively on electric auto motor manage techniques,” Saito told Reuters.

WalkCar is set to launch on crowdfunding website Kickstarter in October 2015, with a value tag of all around a hundred,000 yen (£500) and shipping is expected in Spring 2016.

Lexus, meanwhile, unveiled its eagerly anticipated hoverboard last week, which makes use of magnetic fields to carry its rider without having touching the ground.